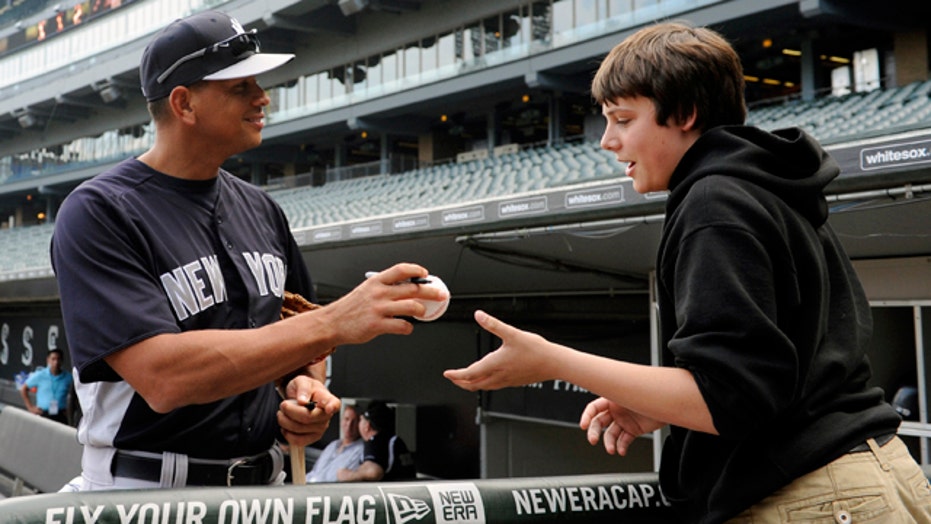 How to tell your kids about the A-Rod scandal

On a day filled with recrimination, regret and refrain, 13 players were penalized as a result of Major League Baseball's six-month-plus investigation of Biogenesis of America, a Florida anti-aging clinic accused of distributing banned performance-enhancing drugs.

Twelve accepted 50-game suspensions in baseball's most sweeping punishment since the Black Sox scandal nearly a century ago, including All-Stars Cabrera, Cruz and Everth Cabrera. They can return for the playoffs if their teams make the postseason.

Rodriguez was suspended through 2014, but looked ahead to overturning the penalty in a grievance.

With Ryan Braun's 65-game suspension last month, the number of players connected to Biogenesis rose to 18.

The harshest penalty was reserved for Rodriguez, the New York Yankees slugger, a three-time Most Valuable Player and baseball's highest-paid star. His suspension covers 211 games starting Thursday. And since arbitrator Fredric Horowitz isn't expected to rule until November or December at the earliest, Rodriguez was free to make his season debut Monday night and play the rest of this year.

Sidelined since hip surgery in January, Rodriguez rejoined the Yankees for a series opener at the Chicago White Sox, playing third base and batting fourth.

"The last seven months has been a nightmare, has been probably the worst time of my life for sure," Rodriguez said before the game.

Booed loudly each time he walked to the plate, Rodriguez went 1 for 4 in New York's 8-1 loss. He blooped a single to left field in the second inning, flied out in the fourth and sixth, then struck out in the eighth. He acknowledged he felt rusty in the field, though he made all his plays.

"It was fun to go out there and play the game again," Rodriguez said. "I love the fans here."

Once the greatest player of his time, he was reduced Monday night to saying that he was humbled, at 38, just to "have the opportunity to put on this uniform again" and adding if he didn't fight for his career, no one else would.

A-Rod's drug penalty was for "his use and possession of numerous forms of prohibited performance-enhancing substances, including testosterone and human growth hormone over the course of multiple years," MLB said.

His punishment under the labor contract was "for attempting to cover up his violations of the program by engaging in a course of conduct intended to obstruct and frustrate the office of the commissioner's investigation."

In Chicago, Rodriguez wouldn't deny using PEDs, saying "when the time is right, there will be an opportunity to do all of that. I don't think that time is right now."

Rodriguez admitted four years ago that he used PEDs while with Texas from 2001-03, but has repeatedly denied using them since. His penalty was more than double the previous high for a PED suspension, a 100-game ban given last year to San Francisco pitcher Guillermo Mota for a second offense.

"At some point we'll sit in front of an arbiter and give our case," Rodriguez said.

The suspensions are thought to be the most at once for off-field conduct since 1921, when Commissioner Kenesaw Mountain Landis banned eight White Sox players for life for throwing the 1919 World Series against Cincinnati: Shoeless Joe Jackson, Eddie Cicotte, Happy Felsch, Chick Gandil, Fred McMullin, Charles "Swede" Risberg, Buck Weaver and Claude "Lefty" Williams. They had been suspended by the team the previous year and were penalized by baseball even though they had been acquitted of criminal charges.

While the players' association has fought many drug penalties in the past three decades, attitudes of its membership have shifted sharply in recent years and union staff encouraged settlements in the Biogenesis probe.

Fighting a brain tumor diagnosed a year ago, union head Michael Weiner spoke in a raspy voice during a conference call and said the union's executive board will consider stiffer drug penalties when players meet in December.

But the union will fight Rodriguez's discipline.

"We've never had a 200-plus (game) penalty for a player who may have used drugs," he said. "And among other things, I just think that's way out of line."

A-Rod intimated Friday that New York did not want him to return. The Yankees answered Monday with a statement:

"We are compelled to address certain reckless and false allegations concerning the Yankees' role in this matter," the team said. "The New York Yankees in no way instituted and/or assisted MLB in the direction of this investigation; or used the investigation as an attempt to avoid its responsibilities under a player contract; or did its medical staff fail to provide the appropriate standard of care to Alex Rodriguez."

Cruz attributed his action to a gastrointestinal infection, helicobacter pylori, and said he had lost 40 pounds following the 2011 season.

"I made an error in judgment that I deeply regret, and I accept full responsibility for that error," he said in a statement. "I should have handled the situation differently, and my illness was no excuse."

Peralta can rejoin Detroit for a season-ending three-game series at Miami — not far from the former office of Biogenesis.

Cabrera said he took a banned substance for four days last year when he realized a dislocated shoulder injury from 2011 had only partially healed.

"I was going through a very frustrating time," Cabrera said through an interpreter. "And like I said before, I made the decision to take this. I'm the one responsible for this."

In a statement released by the Tigers, Peralta said in "spring of 2012, I made a terrible mistake that I deeply regret." Peralta apologized to his teammates and "the great fans in Detroit," saying he knows he let "many good people down."

MLB said Melky Cabrera, Colon and Grandal will not receive additional discipline and it found no violations for Washington pitcher Gio Gonzalez and Baltimore infielder Danny Valencia, both linked to Biogenesis in media reports.

In June, baseball struck a deal for Biogenesis founder Anthony Bosch to cooperate. After holding investigatory interviews with the players, MLB presented evidence to the players' union along with its intended penalties, starting the final round of negotiations.

"Those players who have violated the program have created scrutiny for the vast majority of our players, who play the game the right way," baseball Commissioner Bud Selig said. "We continue to attack this issue on every front — from science and research, to education and awareness, to fact-finding and investigative skills."