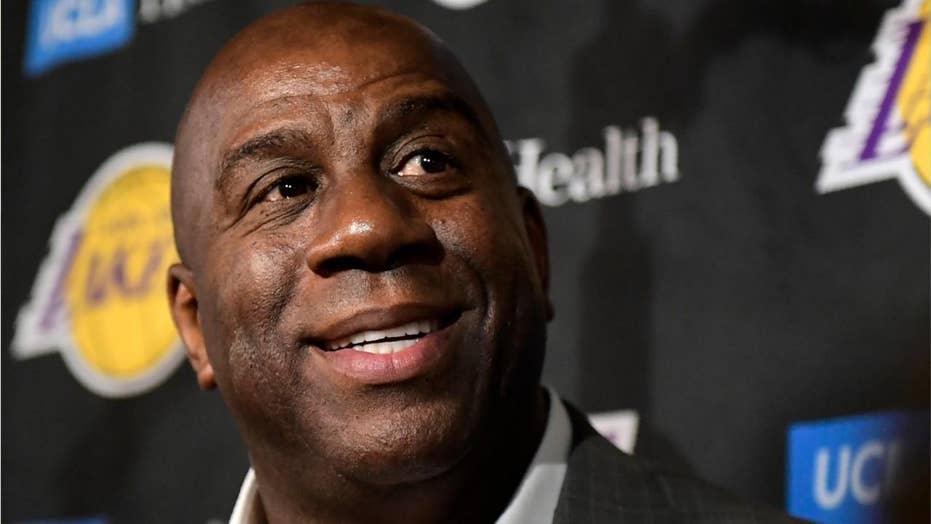 Magic Johnson abruptly quit as the Los Angeles Lakers’ president of basketball operations earlier this month, because management sent emails criticizing Johnson’s bad performance, that he was copied on, according to reports.

Magic Johnson abruptly quit as the Los Angeles Lakers’ president of basketball operations earlier this month, and according to new reports, it was because management sent emails criticizing his bad performance — and Johnson was copied on those emails.

On Colin Cowherd’s show on Wednesday, USA Today reported, Bleacher Report senior writer and Fox Sports 1 analyst Ric Bucher detailed the story involving owner Jeanie Buss and general manager Rob Pelinka: “My understanding is that there were some emails that were exchanged between Rob and Jeanie…about Magic and about what Magic was and wasn’t doing. They were critical emails. And somehow, someway, Jeanie, from what I understand, was CC’ing or blind CC’ing Magic on everything. That was sort of protocol. Standard issue. Somehow, the exchange between Rob and Jeanie ended up on that string of the blind CC’s that were going to Magic.”

Johnson’s shocking resignation as the 16-time NBA champions’ president of basketball operations compounded the turmoil that always seems to envelop the Lakers, who remain among the most talked-about sports franchises in the world even though they haven’t made the playoffs since 2013.

Magic Johnson’s shocking resignation as the 16-time NBA champions’ president of basketball operations earlier this month compounded the turmoil that always seems to envelop the Lakers, who remain among the most talked-about sports franchises in the world even though they haven’t made the playoffs since 2013.(Allen Berezovsky/Getty Images)

Johnson didn’t tell Buss or Pelinka about his shocking decision before he announced it in front of reporters about 90 minutes before the final game of the Lakers’ sixth consecutive losing season.

Los Angeles, which is missing the NBA playoffs yet again despite the offseason addition of LeBron James, played well after Johnson’s announcement, but still lost 104-101 to Portland.

Johnson cited his desire to return to the simpler life he enjoyed as a wealthy businessman and beloved former player before taking charge of this tempestuous franchise just over two years ago.

“I want to go back to having fun,” Johnson said, fighting off tears. “I want to go back to being who I was before taking on this job. We’re halfway there with LeBron coming (last summer). I think this summer, with that other star coming in, whoever is going to bring him in, I think this team is really going to be in position to contend for a championship with the growth of the young players.”

“There is no greater Los Angeles Laker than Earvin Johnson,” it said. “We are deeply grateful to Magic for all that he has done for our franchise as a player, an ambassador and an executive. ... He will always be not only a Lakers icon, but our family. As we begin the process of moving forward, we will work in a measured and methodical fashion to make the right moves for the future of our organization.”

Johnson’s desire for his old life wasn’t the only reason for his departure. He also said he is tired of being investigated or fined by the NBA for tampering when he comments on basketball on Twitter or even speaks to another organization’s player.

Johnson, a longtime broadcaster and respected basketball figure before moving into the front office, has been investigated four times for tampering after everything from a joking comment about Paul George on Jimmy Kimmel’s talk show to his response to an email sent to him by Philadelphia’s Ben Simmons.