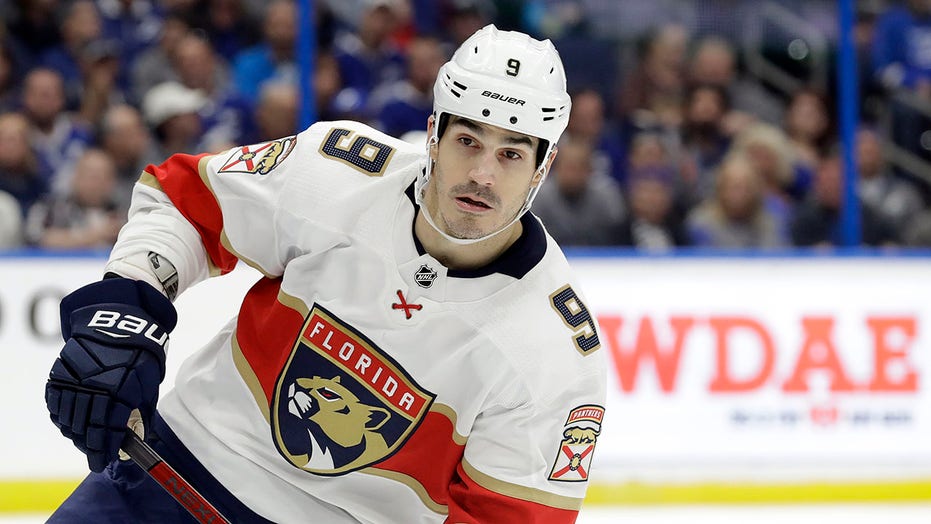 Brian Boyle is a 35-year-old grizzled veteran of 13 National Hockey League seasons who grew up outside Boston.

After seeing video of George Floyd's death, Boyle wanted to say something. The Florida Panthers forward, though, wasn't sure how and didn't want it to come off the wrong way. He wound up calling former teammate J.T. Brown to ask some questions — and listen. Brown is 29, black and the only player so far to protest racial injustice and police brutality during the national anthem of an NHL game, back in 2017.

The two talked about how Floyd's death had affected Brown.

“I was kind of at his mercy,” said Boyle, who is white. “I just don’t understand this pain. I’ve never had to live this pain.”

Floyd's death in police custody has touched off an extraordinary reckoning of race and race relations and sports has been part of it, from European soccer to the NFL. It has also made ripples in NASCAR, which like the NHL has predominately white athletes and, by most accounts, a larger fan base among whites than people of color.

NHL players have no sustained track record of speaking out on societal issues, perhaps part of the reticence that is generally found in hockey. There was no collective outrage after Akim Aliu, Devante Smith-Pelly and Wayne Simmonds joined the list of players who have publicly described their personal experience with racism in hockey.

This time, the culture of silence was nowhere to be found in a league that is over 95% white.

Sidney Crosby, Connor McDavid and more than 100 other NHL players made statements denouncing racial inequality, acknowledging their privilege and pledging to learn and do better. Tyler Seguin protested in Dallas, Zdeno Chara in Boston, while Patrice Bergeron, Tom Wilson and others made donations. Jonathan Toews met with activists in Chicago.

“We have to be as involved in this as black athletes,” Winnipeg captain Blake Wheeler said. “It can’t just be their fight.”

It was the kind of response San Jose's Evander Kane hoped for when he called on white athletes to make their voices heard. Some called it “a perfect storm” — athletes, like everyone else, were at home during the coronavirus pandemic and able to focus on the graphic nature of Floyd’s death in Minneapolis and the visceral reaction.

“People, I think, are listening more,” said Kim Davis, the NHL’s executive vice president of social impact, growth initiatives and legislative affairs. Hired in 2017, she is the highest-ranked African American in the league's hierarchy and reports directly to Commissioner Gary Bettman.

“While these things have been happening for a long time, I think the COVID pandemic has brought to light for many the racial pandemic," Davis said. "To be able to just be paused and to stop and witness for nine minutes, somebody’s knee on someone’s neck and to watch the life be taken out of them ... that’s your humanity (telling) you there’s something very wrong with that.

Seguin marched in Dallas along with retired goaltender Marty Turco and kneeled for 8 minutes and 46 seconds, the time prosecutors say Floyd was pinned under the knee of a white police officer while his heart stopped. Seguin, a 28-year-old Canadian from outside Toronto, long believed matters of race were none of his business.

“It’s unfortunate that it took something of this magnitude to get people’s eyes open or myself having the accountability to realize and look in the mirror and say, ‘I’ve got to be better,’” Seguin said. “Am I part of the stigma because I haven’t thought about this, or haven’t really fully realized it or understood the history of it?”

Since Willie O’Ree broke the NHL’s color barrier in 1958, hockey has been dotted with examples of racism. Just in the last decade, Simmonds had a banana thrown at him and P.K. Subban and Joel Ward were subjected to racist social media posts after scoring playoff game-winning goals. Smith-Pelly was taunted in the penalty box. As recently as April, New York Rangers prospect K’Andre Miller had a video chat during the pandemic hacked by someone who posted a racial slur hundreds of times.

Junior and youth hockey are filled with similar stories, too, even amid determined and long-term efforts to diversify the sport.

“There’s clearly a racism problem in our sport,” said Kane, a 28-year-old Canadian from Vancouver who is part of a new effort by black players to do something about it. "It’s been pushed aside and covered up ever since I’ve been playing hockey. And that is a major issue that we need to suppress in a major way. That’s where being able to create a more diverse game, that’s where it’s going to start."

Retired goaltender Ben Scrivens said he has “a healthy dose of cynicism” in seeing so many of his fellow white hockey players only now speaking out about racism. But he said it is nonetheless meaningful because players “can no longer claim ignorance” anymore.

“The fact that they’re putting themselves out there is a start,” Scrivens said. “And it also opens the door for them to be held accountable going forward.”

It seems like a lifetime ago, but it has only been six months since Aliu's comments on racism in hockey rocked the league. Bill Peters — who Aliu said used racist language toward him earlier in their careers — resigned as coach of the Calgary Flames and the NHL formed councils to address the issues. The growth in the number of players talking about racism now in the NHL seems logical, at least to Aliu.

“It’s a good step in the right direction, so I’m happy to see that,” he said, then paused. “But I feel like it’s long overdue.”