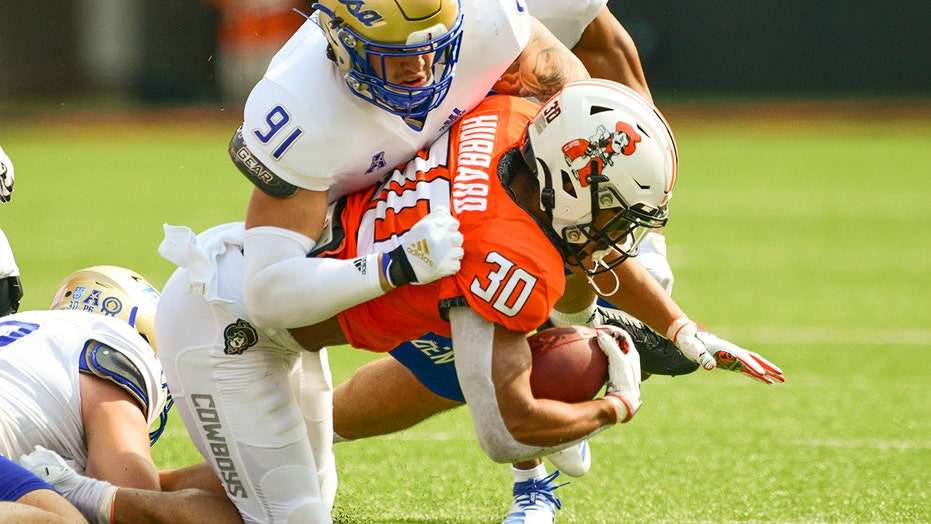 Oklahoma State stayed in it with defense, and Illingworth rallied the Cowboys to a 16-7 victory over Tulsa on Saturday in the season opener for both teams.

Trailing 7-3 late in the third quarter, Oklahoma State received a big offensive spark when Illingworth entered the game and immediately connected on his first three passes, including the two longest plays of the day, hitting Tylan Wallace for completions of 36 and 29 yards.

Chuba Hubbard, who led the nation in rushing last year, was limited to 35 yards in the first half. His 3-yard touchdown run early in the fourth quarter put Oklahoma State ahead for good.

Illingworth completed 4 of 5 passes for 74 yards in just over a quarter of work, helping Wallace finish with four receptions for 94 yards. Freshman Alex Hale made three field goals, two in the fourth quarter, from 27, 40 and 29 yards.

“I was proud of our team,” Oklahoma State coach Mike Gundy said. “We got put in a unique situation there for a while, had to regroup, particularly on offense. Defense was fabulous. I’m thrilled with the guys for fighting through all the adversity and finding a way to win at the end.”

For Tulsa, Zach Smith completed 18 of 28 passes for 164 yards and one touchdown, a 16-yard toss to Josh Johnson with 1:38 left in the first half that put the Golden Hurricane up 7-3.

The Golden Hurricane had trouble capitalizing on their opportunities, going 0 for 12 on third downs, while numerous poorly timed penalties also set them back. They ended up being flagged for 15 penalties totaling 120 yards, including a touchdown taken off the board in the fourth quarter due to a false start on 3rd-and-goal.

“Just didn’t put things away when we had opportunities,” Tulsa coach Philip Montgomery said. “Got to convert when you’re in the red zone. You’ve got to make those opportunities count and finish them with touchdowns. But I was proud of our football team. I thought we played extremely hard and obviously just needed to get over the hump there at the very end.”

The game took place a week after it was originally supposed to, with Tulsa requesting it be rescheduled to better prepare for the season after missing nine days of practice earlier in camp due to several players testing positive for the coronavirus. Smith was one of the players that had to be quarantined and would not have been able to play if the game was held as scheduled last week.

The Cowboys lost starting quarterback Spencer Sanders with an apparent right ankle injury late in the first half after he completed 2 of 2 passes for 23 yards and gained nine yards on five rushes. Ethan Bullock, a junior college transfer from the City College of San Francisco, stepped in and was 8 of 13 for 41 yards but had trouble moving the ball.

“Bullock had a couple things happen to him that weren’t really his fault, but it got to a point where we were just kind of stale and I felt that we needed a change,” Gundy said of switching to Illingworth. “I think (Illingworth) handled it really well.”

There was no immediate word on how serious Sanders’ injury might be or how long he might be out.

Hubbard, last season's Big 12 Offensive Player of the Year, was bottled up for most of the game but still wound up with 93 yards on 27 carries, snapping his 11-game streak of 100-yard contests.

“I wasn’t frustrated,” Hubbard said of his early struggles. “That’s just football, it’s going to be like that sometimes. Sometimes you got to ground and pound, and sometimes you’ll have holes you can shoot right through. At the end of the day, obviously, it wasn’t a clean win, we have a lot of things to work on, but we won and that’s all that matters.”

Tulsa: The Golden Hurricane was without their top running back, Shamari Brooks, who suffered an ACL injury in his left knee in practice on Tuesday, and their ground game clearly missed him. Brooks, who gained 1,046 yards and 6 TDs rushing last year, currently sits fifth on Tulsa’s all-time leading rusher list. Tulsa’s other returning running back, Corey Taylor II, who rushed for 461 yards and 6 TDs last year, also saw limited action due to having just emerged from coronavirus quarantine. He ran just three times for one yard, each in short-yardage situations. Deneric Prince, a transfer from Texas A&M, took over the primary running duties and gained 82 yards on 14 carries, while T.K. Wilkerson had 21 yards on eight rushes.

Oklahoma State: The Cowboys’ offense became much more one-dimensional once Sanders left, with the vast majority of their plays attempting to run the ball, as opposed to passing. At the end of the first half, the disparity was 27 rushing plays compared with six pass attempts. Wallace, who led Oklahoma State with 53 receptions for 903 yards and eight touchdowns in 2019 despite missing the final five games with a knee injury, was never even targeted for a pass in the first half. On the first play of the second half, though, Wallace pulled down a 23-yard reception and ended up having a big impact on the outcome.

Given how much Oklahoma State struggled in this game, there’s little question that the Cowboys will drop in the poll this week after such a subpar performance. How much will depend on how the teams below them wind up doing later in the day.

“For me, it was maybe just a little surprising,” Wallace said regarding the performance of Illingworth, who missed some time during the preseason being quarantined. “Seeing him, I know he can play, I know he can run, I know he can do what he’s supposed to do, but with him being a freshman and the first time out there, playing on the big stage, you don’t really know what to expect. He definitely exceeded my expectations, went out there and did his thing, so I’m really proud of the way he played.”

Tulsa plays its final nonconference game next Saturday on the road at Arkansas State.