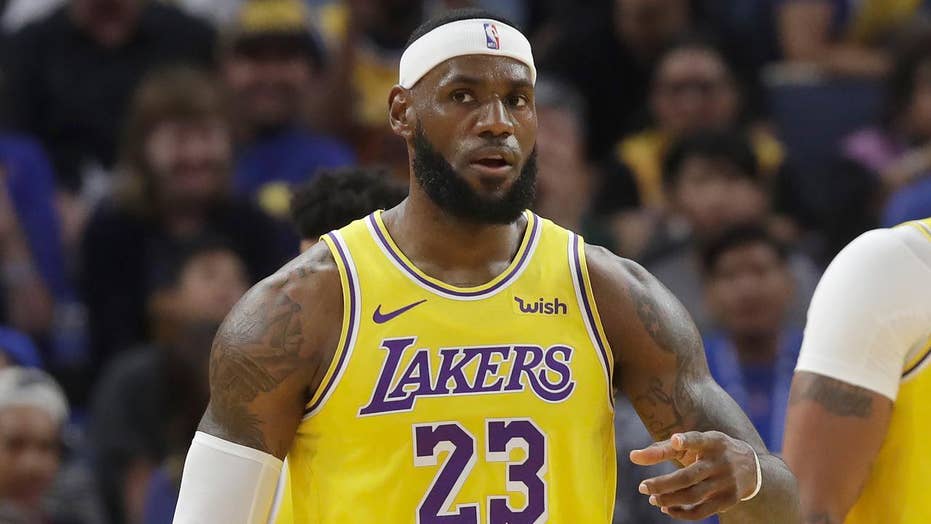 NBA superstar LeBron James is facing swift backlash after he criticized Houston Rockets General Manager Darly Morey's tweet supporting Hong Kong's ongoing protests. Now, those same protestors are even burning James' jerseys in response. Should LeBron have waded into the Hong Kong controversy, and will this have a negative impact on his fan base? Rich 'Big Daddy' Salgado shares his thoughts on the matter.

The now-deleted tweet, “Fight for Freedom. Stand with Kong,” set off a firestorm within the NBA and in China, prompting authorities there to cancel publicity events and news conferences and to ban the last week of an exhibition game between the Brooklyn Nets and James’ Los Angeles Lakers.

Boston Celtics' Enes Kanter (11) drives past Charlotte Hornets' PJ Washington (25) during the first half of a preseason NBA basketball game in Boston. (AP)

James, known for being outspoken on social justice issues, was unusually deferential on the matter, telling reporters Monday that freedom of speech can sometimes have negative ramifications.

“I don’t want to get into a word or sentence feud with … Daryl Morey, but I believe he wasn’t educated on the situation, and he spoke,” James said. “And so many people could have been harmed, not only financially but physically, emotionally, spiritually.”

Amid resounding backlash over his comments, James doubled down, tweeting: “I do not believe there was any consideration for the consequences and ramifications of the tweet. I’m not discussing the substance. Others can talk about that.”

In a follow-up tweet, James said “nobody stopped and considered what would happen” after Morey’s tweet, and that he “could have waited a week to send it.”

He then chronicled his experiences dealing with the ramifications of speaking out against Erdogan’s government.

In an op-ed published Tuesday for the Boston Globe, Kanter wrote: “I have a prominent platform and I want to use it to promote respect for human rights, democracy, and personal freedom. For me, this is bigger [than] basketball. Being a champion of tens of thousands of voiceless people back in my home country carries a risk that includes death threats and arrest warrants.”

The op-ed also recounts Kanter’s recent confrontation at a Boston-area mosque with supporters of Erdogan, but makes no explicit mention of China, Daryl Morey, or LeBron James.