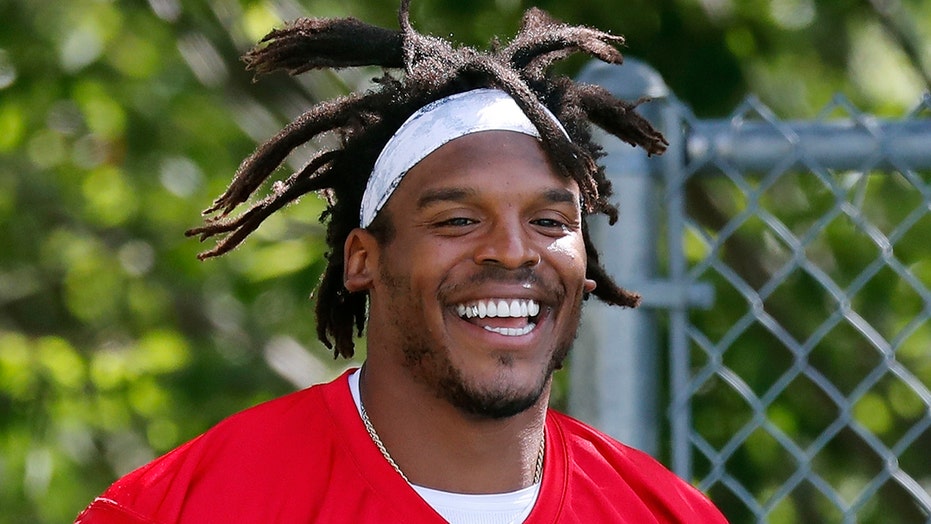 It was only a few years ago that Cam Newton was the NFL’s MVP and was getting the Carolina Panthers to their second Super Bowl appearance after leading them to a 15-1 record.

It was earlier this year that the same Panthers team released Newton after a 2019 season in which he only played in two games and was later out for the season with an injury.

In came the New England Patriots.

BILL BELICHICK ON PATRIOTS QUARTERBACK CAM NEWTON: 'NOBODY WORKS HARDER THAN CAM DOES'

The Patriots lost Tom Brady to the Tampa Bay Buccaneers after two decades and six Super Bowl titles. On the outset of the offseason, it appeared the Patriots were going to settle on either Jarrett Stidham or Brian Hoyer to start games for them during the 2020 season. That wasn’t the case.

New England made the shrewd -- albeit obvious -- move in signing Newton to a one-year deal. Bill Belichick said he was going to compete with Stidham and Hoyer for the starting job and with a week before the season officially kicks off, Newton was named team captain and Week 1 starter.

Newton has appeared to fit into the Patriots culture almost immediately.

Belichick raved about Newton in the days leading up to naming him the starting quarterback.

“You know, I can see why he had the kind of success that he had at Auburn and at Carolina,” Belichick said on SiriusXM NFL Radio “In talking to people that were with him there, the things that they said about him, at Auburn and at Carolina from a decade ago, or two, three years ago, or even last year, it was all the same and it showed up here. He's an extremely hard worker. Nobody works harder than Cam does. He's here early. He stays late, and he works very hard.

“You know, some players like to work on things that they're good at, like if you're strong on a bench press, then you just keep throwing more weight on the bench," Belichick said. "But, Cam is the type of player that works on things that he's not as good at and really tries to improve on a daily basis and that is something that I really respect about him. That's not easy for players -- really any of us -- to do. Look at something that we don't feel like we're very good at, or it is not one of our strengths, and put extra time into it when I would say that is a natural tendency to do things you're good at. He's worked extremely hard in all those areas.

CAM NEWTON GETS INSIDE SCOOP ON PATRIOTS' PLAYBOOK: 'THIS S--T IS CALCULUS'

“He's got a great personality," Belichick continued. "He gets along with everybody. He's very social and has a great presence, whether it is in a small room of a couple people or in a bigger group, and he's highly competitive. He's very, very competitive on the field. He always wants to do his best and do better than the guy he's competing against. You see that from -- everybody's competitive -- but I think there are different degrees of it and it looks like I would, based on what I've seen, I would put him in the top echelon of that.

“But his competition extends way beyond the field. It's off the field and in meetings and training and so forth. You know, it's important for him to be the first guy up the hill when we run sprints and it's important to him to be first in everything that he competes in and you can see the effort and the amount of energy that he puts into that. I'd say those are some of the things that have jumped out in the month or so that we have been here in person.”

It’s not just Belichick he’s rubbing off on. Newton has connected with his probable No. 1 target Julian Edelman as well during the offseason. Newton gave Edelman a nickname during training camp: “Highway 11.” It’s fitting since Newton is going to rely on Edelman to run up the seam.

And for the silly questions about fitting into the offense, Patriots quarterbacks coach Jedd Fisch said he believes Newton can do the same things he did with the Panthers.

CAM NEWTON: I CAN DO THINGS FOR PATRIOTS THAT TOM BRADY COULDN’T

“It’s one of those very difficult things to evaluate as you in terms of while you’re practicing because tackling to the ground is very different as we know,” Fisch said, according to Mass Live. “Then you get someone like Newton who’s at 250 pounds, 6-foot-5, and now it’s like how do you evaluate that when you’re sitting there in a red jersey? I think what we’d probably say to that is that you have to assume that he’s healthy, Cam, which is what we’ve seen since we started working with him.

“You go back to the last time you saw a healthy Cam, you go back to when he was playing games in Carolina, and what did a healthy Cam look like in terms of running the football and in terms of being able to break a tackle or being able to knock a guy down? That’s the assumption we are going to work off of until he’s unable to do the things he has shown he’s able to do.”

Fisch added that he’s seen improvements in Newton catching up with the playbook, including making better decisions and reading the defense before snapping the ball.

“Absolutely, there has been great improvement,” Fisch said. “Each day we’ve seen a substantial difference in regards to knowledge. A lot of times you get involved in repetition and the more you do the same thing over and over again, the better he gets it. Every rep that he’s had up at the line of scrimmage is one more additional rep running our offense at a full-speed tempo. So if we are able to continue to do that, each day I can see a nice jump in terms of his comfort level at the line of scrimmage and I think we can say all the coaches involved would say everyday can be better than it was and better than the last.”

PATRIOTS' CAM NEWTON: 'I FELT LIKE I WAS JUST LEFT TO DIE'

Even Newton admitted earlier in the year that playing in New England is a "breath of fresh air."

"I don't have to prove nothing, because at the end of the day, especially not to nobody," he said, according to NFL.com. "Now I have to prove it to myself, that's a daily challenge and I don't think nobody's expectations will ever surpass my expectations for myself. I'm just looking forward to the challenge, and knowing and picking up this whole system, not only the philosophical way of the offense, but also how things are ran.

"It's just a breath of fresh air, to be honest with you. It's a challenge that I have to expect each and every day. But no challenge is ever gonna be greater than the challenge, a personal challenge, that I challenge myself personally. We all know what that was and what that is and it needs no mention.”

Will we see Belichick in a headscarf or with a 10-gallon hat during press conferences this season? Very unlikely. But all the question marks about how Newton is going to handle the so-called Patriot Way and fitting into a hard-nosed culture run by Belichick have gone out the window.

Newton isn’t Brady – that’s for certain. But the Patriots have shown they aren’t going to relinquish their AFC East title without a fight. New England might not be the overwhelming favorites anymore in the AFC to make the Super Bowl, but having Newton represents the best chance of the team re-gaining glory.