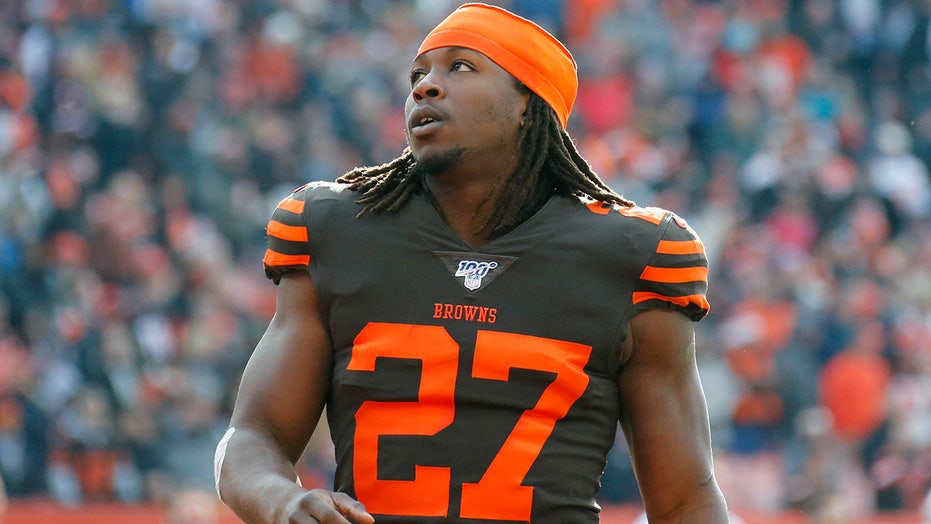 Scared he jeopardized his NFL career when police found a small amount of marijuana in the Browns running back's car during a traffic stop, Hunt, who served an eight-game league suspension last season for two physical altercations while with Kansas City, said Monday that he's grateful the Browns have stood by him.

"I know any second it can be gone.”

When he was pulled over in January, Hunt told a Rocky River Police officer that the incident could ruin him if it became public. During a search, police also found an open container of vodka in a backpack on the back seat.

Hunt was only cited for speeding, but he admitted to the officer he would have failed a league drug test at the time.

Days later, Hunt received a strong reprimand from Browns owner Jimmy Haslam, who said the actions “were not acceptable.” The team also pledged to keep working with the 24-year-old, who had been disciplined by Commissioner Roger Goodell for shoving and kicking a woman during an argument in a hotel hallway while he played for the Chiefs.

The Browns signed the Cleveland-area native before last season and Hunt stayed clear of trouble while also undergoing counseling.

He said the misstep this off-season was inexcusable.

“I would say that was out of character,” he said. "I learned from it, I’ve been working to become a better person each and every day. Definitely not looking for anything like that to happen again. I’ve been working. Now I’m just focused on football, working out and getting ready for this season.

“I’ve got to do better. Shouldn’t have done it. Ready to move on from that and focus on football.”

The Browns are counting on it.

They see Hunt as a valuable and versatile piece to their offense. Hunt has been “cross-training” during the club's virtual off-season program, attending meetings with both the running backs and wide receivers as he learns new coach Kevin Stefanski's offense.

But his top priority is acting more professionally off the field, and Hunt said Stefanski and Andrew Berry, the club's executive vice president of football operations, have made it clear to him that they won't tolerate bad behavior.

“I've got to be smarter and cannot be doing stuff like that,” Hunt said. “We had a good talk. They see me on the field as a guy who is going to make some plays this year and help the team win. That is what I have been looking forward to. We have been talking. I keep in touch with coach all the time about what he wants to see.”

During the COVID-19 pandemic, Hunt said he's been working out and “staying low key.”

“I have been pretty much hanging with the family,” he said. "Talking to my close people, going out there working, doing stuff in the community, helping people out. It has been a crazy time in the world. Everybody has to try to be the best person they can be right now.”

The Browns, who are looking to bounce back after falling far short of expectations in 2019, signed Hunt to a one-year tender in March. They see him as a perfect complement to star running back Nick Chubb, and Hunt would like nothing more than to earn a long-term contract with Cleveland.

“I think we can do something special here,” he said. "I want to get that Super Bowl feeling and I believe we can do it here in my hometown. That would be bigger than anything, for me. I would definitely like to be a part of something like this. Everybody is here I care about. I know everybody in the whole town. I would not mind playing for the Browns for a long time.”