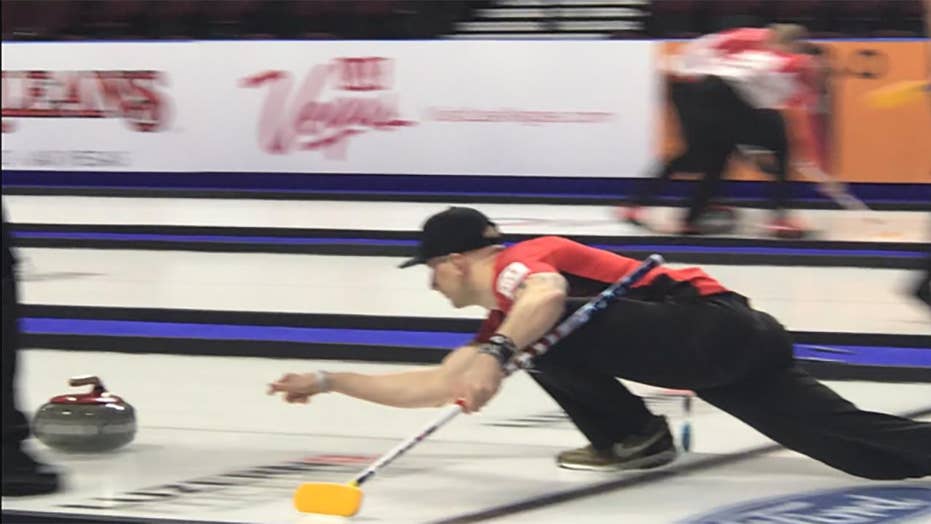 Popularity soars for winter sport of curling across America

The talk in Vegas this week has been all about rocks, brooms and hammers. But they aren’t talking about the modern tools – it’s all about curling.

The once-fringe sport has seen an explosion in popularity in the United States since the country’s Men’s Olympic team bested rival Sweden in a surprising upset in Pyeongchang, South Korea. John Shuster, Tyler George, Matt Hamilton, John Landsteiner and Joe Polo won the first-ever gold medal in men’s curling for USA in a 10-7 match against the Nordic favorite.

Long considered a fringe oddity among American spectators, the sport is quickly entering the mainstream in ice rinks across the country and achieving a level of gravitas that few expected, according to sport officials.

The U.S. Men's Curling team celebrates their gold medal on the podium in Pyeongchang, South Korea.

“To be fair in the past, we’ve always said the United States were our sleeping giant. It actually woken up before the Olympics, but of course with Shuster and his team winning gold, I mean it’s now gone crazy,” said Kate Caithness, World Curling Federation President. She’s the first female president of any winter sport.

For the past two weeks, the arena at the Orleans Hotel in Las Vegas has been transformed into a field of ice as men’s curling teams from all across the world have descended on this desert locale to compete in the men’s world national championships.

Caithness attributes the rise in popularity to a peak interest in younger generations. In other words, curling isn’t just your father’s sport anymore.

“In the past it has been a sport played by the older generation, if I could say that really,” she said. “But now, since 2010, since we had the Olympics in Vancouver, all of a sudden it just changed the whole profile of our sport. And as you can see on the ice, we’ve had so many young people play our sport.”

The sport’s world body says curling has been around for hundreds of years and is believed to be one of the oldest team sports, having originated in Scotland, where the organization is based. It debuted at the Winter Games in Paris in 1924, but didn’t surface again officially until 1998 at the Nagano games in Japan.

Ice being ubiquitous in colder climes, it’s natural that the sport’s most fervent fans call Canada home. The Canadian team boasted the most supporters in the stands at the Vegas championships. Canada is vying for its 37th world title.

Shuster and his team that took gold in Pyeongchang did not participate in the championships, but the United States was still represented by an alternate foursome: Greg Persinger, Rich Ruohonen, Colin Hufman, and Philip Tilker.

Ruohonen swatted down one of the most common American misconceptions about curling.

Curlers have to be flexible, getting down in the slide position to glide the rock or stone along the ice. The rock is a 40-pound piece of granite with a handle on the top. The objective is to “throw” the rock toward the opposing team’s side and garner points depending on the final positions of the rock.

Sweeping with a broom is used to cause friction so that team members can manipulate the direction of the rock. It makes the rock curl less and go farther. The golden rule is do not touch the rock, not with your hand or with your broom.

Team USA compared it to chess on ice and say it’s all about putting the pieces together, strategically.

“It’s pretty simple in terms of rules, the tough thing is getting the strategy down. It’d be like if you played chess for the very first time, you’re not going to know how to do it if you’re playing someone who does it competitively, you’re going to get crushed,” said Colin Hufman, U.S. team member.

Hufman went on to say that the sport is growing in places across the country you wouldn’t expect, like in the southeast.

“It’s almost like how bowling is, there’s curling leagues that a lot of people just play in the weeks and like seeing those folks and playing at fun events.”

Curlers spend hours in the gym training and their games last for almost three hours, sometimes having more than one in a day at high-profile tournaments.

This is all happening as the sport gears up for its next big international stage: Winter Olympics Beijing 2022

The sport itself added a Paralympic wing in 2006 and only recently incorporated mixed doubles.

The appeal stems from the genteel aspect of the once only gentlemen’s game on ice. Tradition stipulates that if one team has a high enough number of points on the scoreboard over their opponent the losing side can offer just a simple handshake to end the match.