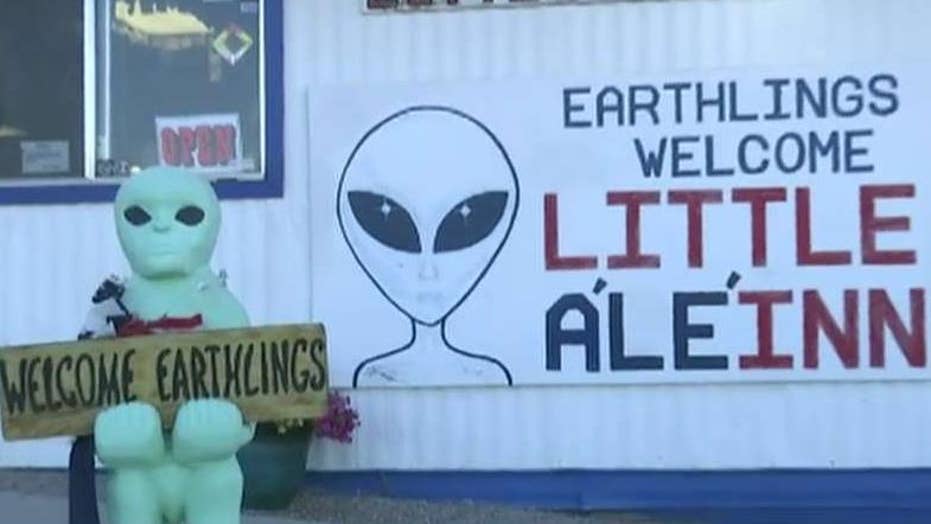 LAS VEGAS – In an area known for mystery and intrigue, the biggest unknown lies in the days ahead.

The tiny Nevada towns that dot the landscape of the high desert areas about 100 miles north of bustling Las Vegas are preparing for a possible influx of thousands of people over the next several days due to the viral "Storm Area 51" and the related festivals that have sprung up.

Thousands of alien-obsessed visitors, and just a pair of gas stations along a lone two-lane road.

"If there happens to be any problem, people could be trapped out here," Ken Sig, a tour guide at Las Vegas Adventure Tours, told Fox News Wednesday during a lengthy 10-hour tour of the area. "It could be like Woodstock in the desert."

Area 51 is popularly known as the site of rumored government studies of outer space aliens. The "Storm Area 51" Facebook event went viral in July as people pledged to crash the secret military base in an attempt to "see them aliens." More than 2 million Facebook users have now said they are going, with over 1.4 million replying they were interested.

The Internet joke that went viral has spurred two rural Nevada counties to draft an emergency declaration, with local law enforcement planning to team resources with the state and neighboring counties ahead of Sept. 20-22 events. During the day on Wednesday, numerous emergency vehicles could be seen heading north along U.S. 93 toward the site, and staging areas could be seen with fire and rescue personnel.

Emergency personnel can be seen staging at an area outside Rachel, Nev. on Route 375, also known as the "Extraterrestrial Highway." (Travis Fedschun/Fox News)

Flight restrictions have been issued for the area surrounding Area 51 from Thursday through Sunday, according to the Federal Aviation Administration. The FAA's "notice to airmen" states that pilots are not allowed to operate aircraft near the Nevada National Security Site from 7 a.m. on Thursday through the same time on Sunday for "special security reasons," the FAA's note states.

Sig, who has lived in the Vegas area for nearly 30 years and worked for Adventure Tours for about seven months, told Fox News on Wednesday he's given about 100 tours to the area but in recent weeks there's been a notable uptick in security that's made things "very fluid." On a recent tour, he was confronted by dozens of armed guards on the side road to Area 51's popular main gate, causing him to turn back.

The road that leads to the main gate of Area 51 intersects other dirt and gravel roads, making it easy to get lost. (Travis Fedschun/Fox News)

The road that leads to the main gate of Area 51 intersects other dirt and gravel roads, making it easy to accidentally end up on private property. Those trekking to the area relying on basic GPS without a professional tour guide may risk facing hefty fines, jail time, or worse.

"If you don't know the areas, you aren't going to know the spots," Sig told Fox News.

A herd of antelope can be seen crossing the roadway to the "back gate" of  Area 51. (Travis Fedschun/Fox News)

Traveling through the area, dotted by Joshua trees and occasional wildlife, distant swirls of dust can occasionally be seen that, on a closer look, are stirred up by a vehicle. On the road to what's known as Area 51's so-called "back gate," a white unmarked truck appeared on a side road before turning off in a direction as other vehicles could be seen lurking further away on distant hills.

An unmarked white truck turns from a side road onto the roadway to Area 51's so-called "back gate" on Sept. 18, 2019. (Travis Fedschun/Fox News)

"Nobody for sure knows what's going to happen in the next few days here," he told Fox News. "It's one of those things that time will tell."

The owner of Las Vegas Adventure Tours and operator of GetYourGuide's Area 51 tour, Will Tryon, previously told Fox News his company won't be taking customers out into the area from Sept. 19 to 22 out of concerns that things could "get difficult," including the possibility that the few gas stations in the area may run out of fuel.

"We have to think first of the safety of their customers," he said. "I don't think putting a customer in that kind of situation is a safe choice."

In the small town of Rachel, which is only home to about 50 people, tension over uncertainties in the days ahead appeared to boil over.

When arriving at the Little A'Le'Inn, a woman who said she was a resident could be seen beeping her horn and yelling out her window at someone who left camera equipment behind a parked vehicle, partially blocking where she intended to drive.

"I'm tired of all this," she shouted.

A stage under construction on Wednesday at the Little A'Le'Inn in Rachel, Nev. (Travis Fedschun/Fox News)

The co-owner of the inn, Connie West, is still planning to go through with an "Alienstock" Thursday through Sunday with 20 musical acts, plus food vendors and souvenir sellers. West said last week there would be a Medevac helicopter, ambulances and 130 Porta-Johns coming, in addition to law enforcement and a security team.

The Little A'Le'Inn is getting last-minute preparations in before the weekend. (Travis Fedschun/Fox News)

Matty Roberts, who created the Facebook post that went viral, broke ties with her event over infrastructure and safety concerns. Roberts, 20, of Bakersfield, Calif., is supporting an "Alienstock" festival scheduled for Thursday at an outdoor venue in downtown Las Vegas.

West, however, told Fox News on Wednesday she has family and volunteers helping to help her event be a success.

"All we can do is go forward," West told Fox News.

'WE HOPE TO SEE SOMETHING COOL'

While locals and law enforcement have voiced concerns over what may transpire over the weekend, there are others that are looking forward to just celebrating anything extra-terrestrial.

Alexandra Bousson and Sasha Rodriguez from Michigan dropped by the Little A'Le'Inn in Rachel on Wednesday in full costume, even though the "storming" isn't supposed to happen for a few more days.

Further down the E.T. highway, Bob and Helen Pio were setting up their camper near the "Black Mailbox," a famous stop where UFO hunters meet up. The couple, originally from Pennsylvania, had 50 gallons of water and plenty of gasoline to get them through the next few days.

Bob and Helen Pio set up their camper near the "Black Mailbox" and had enough supplies to last a few days. (Travis Fedschun/Fox News)

The couple was planning on possibly checking out the festival in Rachel on Friday.

But for a bachelorette party from England on holiday in Las Vegas for a week, complete with a helicopter flight over the Grand Canyon, the feeling of just being steps away from an entrance of Area 51 was one thing: "surreal"

"It's crazy that you're just standing here and that's Area 51 over there," Jasmeena Samrai told Fox News. "It's a surreal experience. It's an experience like a movie."