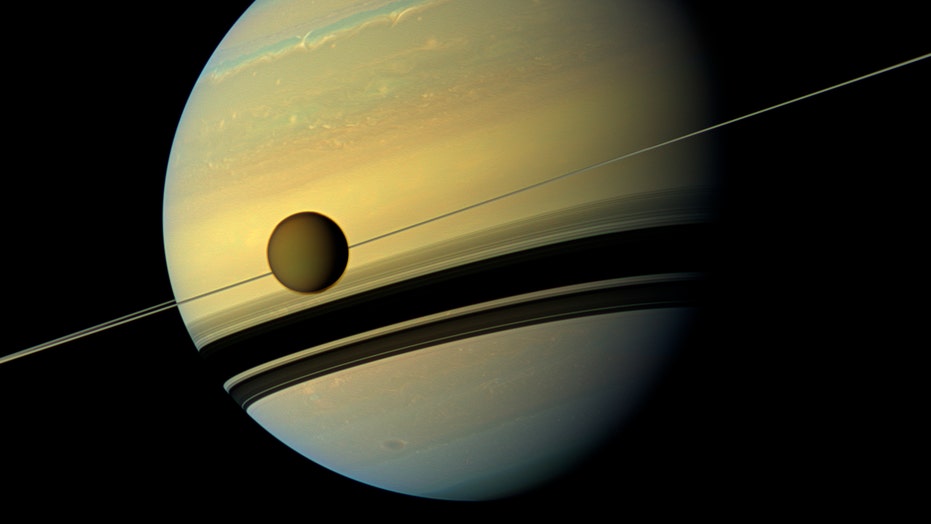 Researchers have discovered that Saturn's moon, Titan, which could support extraterrestrial life, is moving away from the ringed planet 100 times faster than previously believed.

The study, published in Nature Astronomy, found that Titan is migrating away from Saturn at a rate of about four inches per year, which could reshape how astronomers view the Solar System and the universe itself.

"This result brings an important new piece of the puzzle for the highly debated question of the age of the Saturn system and how its moons formed," said the study's lead author, Valery Lainey, who previously worked at NASA JPL, in a statement.

The colorful globe of Titan passes in front of Saturn and its rings in this true-color snapshot from NASA's Cassini spacecraft in 2011. Image credit: NASA/JPL-Caltech/Space Science Institute

In a separate statement, Caltech assistant professor of theoretical astrophysics and study co-author Jim Fuller said that previous research into other planet's moons were predicated on their distance being relatively stable compared to their planets. Caltech manages JPL for NASA.

"Most prior work had predicted that moons like Titan or Jupiter's moon Callisto were formed at an orbital distance similar to where we see them now," Fuller said. "This implies that the Saturnian moon system, and potentially its rings, have formed and evolved more dynamically than previously believed."

"The new measurements imply that these kind of planet-moon interactions can be more prominent than prior expectations and that they can apply to many systems, such as other planetary moon systems, exoplanets - those outside our solar system - and even binary star systems, where stars orbit each other," Fuller added.

The researchers used data from NASA's Cassini spacecraft, along with historical observations of the moon dating back to 1886, to come up with their findings.

In September 2017, Cassini made its "death plunge" into Saturn’s atmosphere, ending its 20-year long journey.

Titan continues to be a source of fascination for researchers, with some even suggesting it could support life. In June 2019, NASA announced the latest mission in its New Frontiers program to explore the moon.