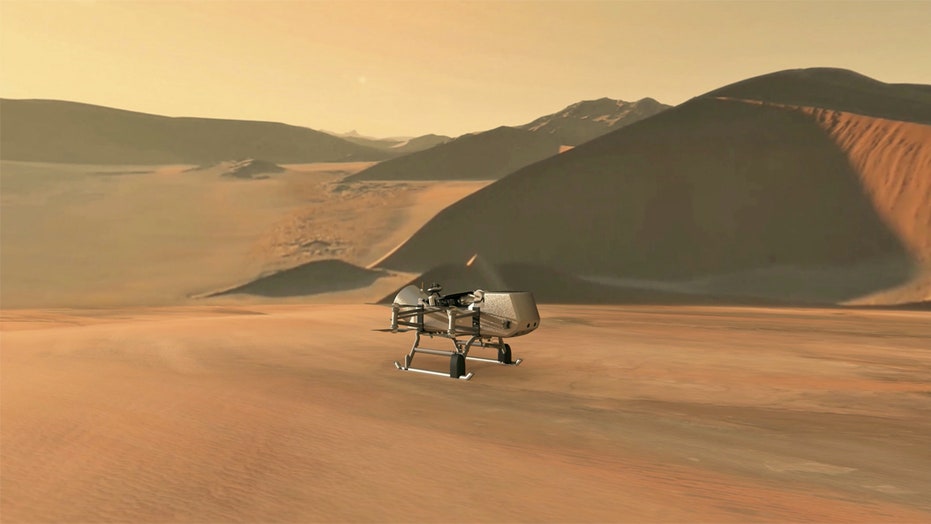 "This ocean world is the only moon in our solar system with a dense atmosphere & we’re so excited to see what Dragonfly discovers," NASA Administrator Jim Bridenstine said in a tweet on Thursday.

This illustration shows NASA’s Dragonfly rotorcraft-lander approaching a site on Saturn’s exotic moon, Titan. Taking advantage of Titan’s dense atmosphere and low gravity, Dragonfly will explore dozens of locations across the icy world, sampling and measuring the compositions of Titan's organic surface materials to characterize the habitability of Titan’s environment and investigate the progression of prebiotic chemistry. Credits: NASA/JHU-APL

MARS MAY HAVE HOSTED LIFE EARLIER THAN EARTH DID, STUDY SAYS

Titan's atmosphere is four times as dense as Earth's, with NASA likening it to that of early Earth.

"Titan is an analog to the very early Earth, and can provide clues to how life may have arisen on our planet," the space agency wrote in a statement. "During its 2.7-year baseline mission, Dragonfly will explore diverse environments from organic dunes to the floor of an impact crater where liquid water and complex organic materials key to life once existed together for possibly tens of thousands of years."

NASA continued: "Its instruments will study how far prebiotic chemistry may have progressed. They also will investigate the moon’s atmospheric and surface properties and its subsurface ocean and liquid reservoirs. Additionally, instruments will search for chemical evidence of past or extant life."

Dragonfly, which will eventually fly more than 108 miles around Titan when all is said and done, was able to build upon NASA's previous mission to Saturn, Cassini. After spending 13 years exploring Saturn and its moons, generating a treasure trove of data, Cassini intentionally plunged itself into Saturn's atmosphere in September 2017.

Upon arrival, Dragonfly will land in the “Shangri-La” dune fields, which NASA likened to the linear dunes in Namibia. There, it will take short flights and eventually go on "leapfrog" flights, 5 miles in length, while stopping to take samples.

It will then move on to the Selk impact crater, where NASA said "there is evidence of past liquid water, organics – the complex molecules that contain carbon, combined with hydrogen, oxygen, and nitrogen – and energy, which together make up the recipe for life."

Larger than the planet Mercury, freezing under a surface temperature of -290 Fahrenheit and with a surface pressure 50 percent greater than Earth's, “Titan is unlike any other place in the solar system," Thomas Zurbuchen, NASA’s associate administrator for science said in the statement, adding that "Dragonfly is like no other mission.”

Dragonfly is just the latest in a long line of missions as part of the New Frontier program, which Lori Glaze, director of NASA’s Planetary Science Division, said “[have] transformed our understanding of the solar system."

Recent missions include the Juno mission to Jupiter (launched in 2011) and the New Horizons mission, which visited Pluto in 2015 and more recently, flew past the mysterious Ultima Thule and found both water and "organic molecules" on its surface. The OSIRIS-REx spacecraft, which is analyzing the Bennu asteroid, is also a part of the New Frontier program.

In December 2018, OSIRIS-Rex found water locked inside the asteroid's clay.

In April, researchers discovered that lakes on Titan are filled with liquid methane, utilizing data from Cassini. Dust storms were spotted on the celestial satellite in September 2018, which raised the prospect the storms could be a precursor to alien life on the celestial body.