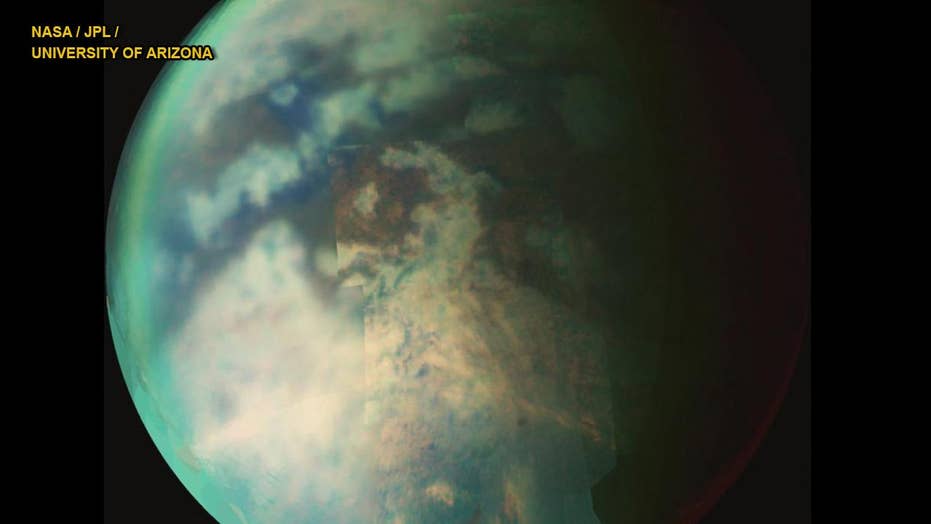 Rain spotted on Saturn's moon Titan, which may be home to alien life

Saturn's moon Titan is providing another surprise to researchers, the sight of fresh rainfall.

Saturn's moon Titan, which some scientists have theorized could be the home to extraterrestrial life due to the presence of surface liquid and dust storms, is providing another surprise to researchers — the sight of fresh rainfall.

Prior to making its death plunge into the ringed planet, NASA's Cassini spacecraft was able to capture a reflective feature near the north pole of Saturn's largest moon. The image was taken in June 2016 and was published in a study in the scientific journal Geophysical Research Letters on Wednesday.

“It’s like looking at a sunlit wet sidewalk,” said Rajani Dhingra, a doctoral student in physics at the University of Idaho, in a statement. She noted that additional analysis suggested the methane rain fell on a "relatively pebble-like surface."

Dhingra added that the scientific community had been in search of clouds and rains on the north pole of Titan, but had yet to see any, despite what their models suggested. “People called it the curious case of missing clouds," she said.

The image covers approximately 43,330 square miles (roughly half the size of the Great Lakes) on Titan and the researchers noted that the glistening rainfall disappeared quickly, which likely means it was made up of methane rain, according to the study's abstract.

At 50 percent larger than Earth's Moon, Titan is the second largest moon in the solar system, behind only Ganymede of Jupiter.

The rainfall signifies that summer is happening on the planet and its moon (Saturn takes 29.5 Earth years to orbit the Sun), but it was delayed. Now, Dhingra said the researchers have to "figure out what caused delay."

In September, dust storms were spotted on Titan for the first time ever, raising the prospect the storms could be a precursor to alien life on the celestial body.