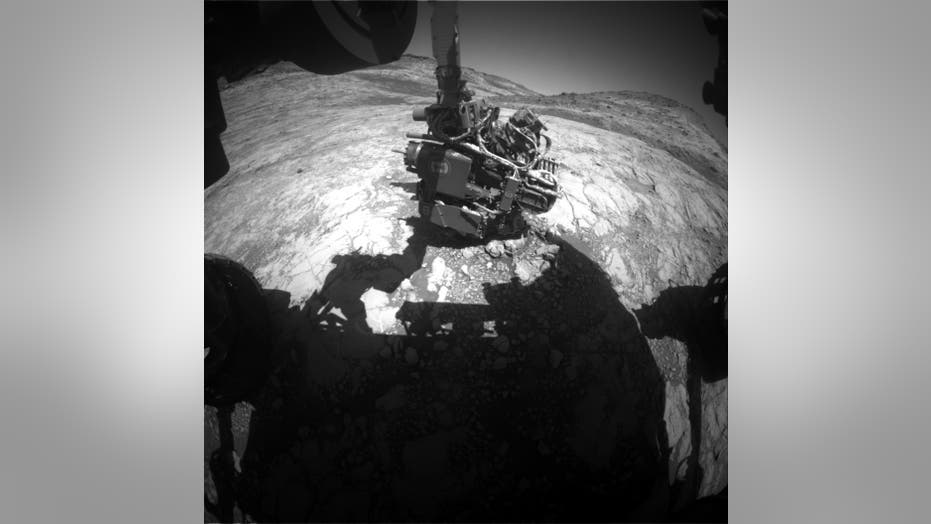 NASA's Curiosity rover, which celebrated its seventh anniversary on Mars in August and has made several remarkable discoveries, is stuck frozen on the Red Planet.

In a mission update earlier this week, the team operating the rover wrote that Curiosity recently lost its orientation during its last set of activities.

"Some knowledge of its attitude was not quite right, so it couldn't make the essential safety evaluation," Curiosity team member Dawn Sumner wrote in the post. "Thus, Curiosity stopped moving, freezing in place until its knowledge of its orientation can be recovered."

"Curiosity stores its body attitude in memory, things like the orientation of each joint, which instrument on the end of its arm is pointing down, and how close [Alpha Particle X-Ray Spectrometer] is to the ground," Sumner added.

This Hazcam image shows Curiosity's arm extended out to perform an APXS analysis of the bedrock. Curiosity has to know the exact angle of every joint to move safely. (Credit: NASA/JPL-Caltech)

Sumner added that Curiosity continues to send the team information so that they can work on a recovery plan. They're working on giving Curiosity its attitude and let the rover have the ability to make safety checks, as well as prevent this problem from happening in the future.

Year 2020 is poised to be a big one for the exploration of Mars. NASA will launch the Mars 2020 rover (renamed prior to launch) on July 17, joining the Curiosity rover and the now-deceased Opportunity rover on the Red Planet.

The Mars 2020 rover, expected to reach the Martian surface on Feb. 18, 2021, will detect if there is any fossilized evidence of extraterrestrial beings, in addition to other tasks. In 2019, Curiosity detected oxygen that "behaves in a way that so far scientists cannot explain."

Several months prior to that, the rover also detected an "unusually high" level of methane on Mars. On Earth, methane is produced both biologically and geologically, although it is not clear what caused the methane spike on Mars.

NASA’s long-term goal is to send a manned mission to Mars in the 2030s. However, former astronauts, including Apollo 11 astronaut Michael Collins, think we should skip a return mission to the Moon, slated for 2024, and "shoot directly for Mars."