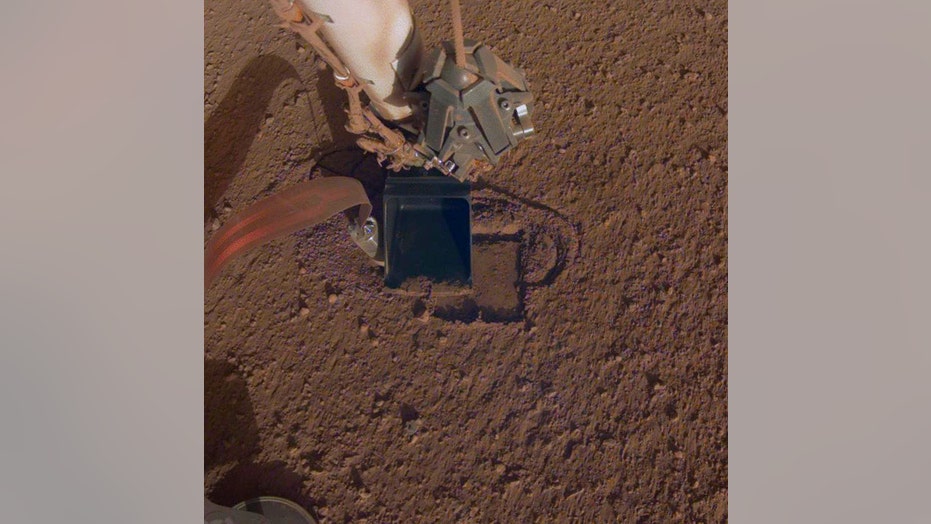 NASA discovered an oasis on Mars that may have once hosted life, and an upcoming mission to the Red Planet is going to see if there is any fossilized evidence of extraterrestrial beings.

Two new studies found that the Jezero Crater, where the Mars 2020 rover is slated to land on Feb. 18, 2021, contains mineral deposits of hydrated silica, a substance that is "particularly good" at preserving biosignatures.

"Using a technique we developed that helps us find rare, hard-to-detect mineral phases in data taken from orbiting spacecraft, we found two outcrops of hydrated silica within Jezero crater," said the lead author of the first study, Jesse Tarnas, in a statement. "We know from Earth that this mineral phase is exceptional at preserving microfossils and other biosignatures, so that makes these outcrops exciting targets for the rover to explore."

Lighter colors represent higher elevation in this image of Jezero Crater on Mars, the landing site for NASA's Mars 2020 mission. The oval indicates the landing ellipse, where the rover will be touching down on Mars. Credits: NASA/JPL-Caltech/MSSS/JHU-APL/ESA

In November 2018, NASA announced that it had selected the Jezero Crater, a 28-mile-wide hole in the ground, as the location where its Mars 2020 rover will land on the Red Planet.

Jezero may have been home to an ancient lake and had rivers that fed into the lake. The presence of silica could be a huge coup for finding any fossilized evidence of life, said Jack Mustard, one of the study's co-authors.

The researchers used data from the Compact Reconnaissance Imaging Spectrometer for Mars (CRISM) instrument on Mars Reconnaissance Orbiter and found two spots in the Jezero Crater that contain silica deposits.

"The material that forms the bottom layer of a delta is sometimes the most productive in terms of preserving biosignatures," Mustard added in the statement. "So if you can find that bottom set layer, and that layer has a lot of silica in it, that's a double bonus."

This study has been published in the scientific journal Geophysical Research Letters.

In a separate study, published in the scientific journal Icarus, researchers used the CRISM data to find a "bathtub ring" of carbonate minerals along the inner rim of Jezero. NASA said carbonate is helpful for preserving ancient life in fossil form, specifically mentioning seashells, coral and some stromatolites.

Color has been added to highlight minerals in this image of Jezero Crater on Mars, the landing site for NASA's Mars 2020 mission. The green color represents minerals called carbonates, which are especially good at preserving fossilized life on Earth. (Credit: NASA/JPL-Caltech/MSSS/JHU-APL/Purdue/USGS)

"CRISM spotted carbonates here years ago, but we only recently noticed how concentrated they are right where a lakeshore would be," said the paper's lead author, Briony Horgan, in a statement posted on NASA's website. "We're going to encounter carbonate deposits in many locations throughout the mission, but the bathtub ring will be one of the most exciting places to visit."

It's unclear when the carbonates were formed, but Mars 2020 deputy project scientist Ken Williford said the mere presence of them is exciting for researchers.

"The possibility that the marginal carbonates formed in the lake environment was one of the most exciting features that led us to our Jezero landing site," Williford added in the statement. "Carbonate chemistry on an ancient lakeshore is a fantastic recipe for preserving records of ancient life and climate. We're eager to get to the surface and discover how these carbonates formed."

Earlier this month, NASA's Curiosity rover detected oxygen "behaves in a way that so far scientists cannot explain" on the Red Planet. In June, Curiosity, which has been exploring the Gale Crater since it landed on Mars in August 2012, detected an "unusually high" level of methane on Mars.

On Earth, methane is produced both biologically and geologically, although it is not clear what caused the methane spike on Mars.