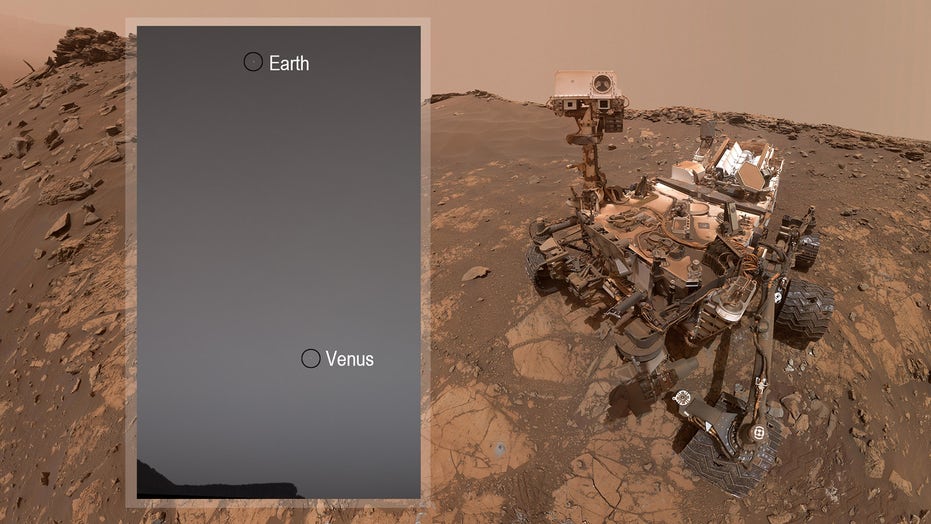 NASA may have a long-term goal of sending a manned mission to Mars by the 2030s, but for its missions on the Red Planet now, it's OK to stop and admire the night sky once in a while.

NASA's Curiosity rover took a panoramic view of Mars as well as a picture of Earth and Venus after sunset, according to a NASA statement on Monday.

"Both planets appear as mere pinpoints of light, owing to a combination of distance and dust in the air; they would normally look like very bright stars," NASA wrote in the release.

Two images of the night sky were combined to show Earth and Venus as seen by NASA's Curiosity Mars rover on June 5, 2020, the mission's 2,784th Martian day, or sol. The planets appear as pinpoints of light owing to a combination of distance and dust in the air. Mars' Tower Butte is visible at bottom. (Credit: NASA/JPL-Caltech)

At the bottom of the combined image is the top of Tower Butte, a part of the Gale Crater that the Curiosity rover has been exploring since it landed there in 2012.

The two photos were used to understand twilight brightness, particularly important given the levels of dust in the air on Mars, Mastcam co-investigator Mark Lemmon of the Space Science Institute, noted.

"Even moderately bright stars were not visible when this image of Venus was taken," Lemmon said in the release. "Earth also has bright twilights after some large volcanic eruptions."

Dust storms on Mars are of great concern to the space agency. In 2019, NASA confirmed that the Opportunity rover, Curiosity's predecessor, died on the planet as a result of a particularly bad storm.

Researchers continue to learn more about the Red Planet ahead of NASA's long-term goal to send a manned mission to the planet in the 2030s.

A study published in March suggested Mars had two unique reservoirs of ancient water that once flowed deep beneath the planet's surface.

NASA's next mission to Mars involves the recently renamed Perseverance rover on July 20, 2020. The Perseverance rover will attempt to detect if there is any fossilized evidence of extraterrestrial beings, in addition to other tasks.