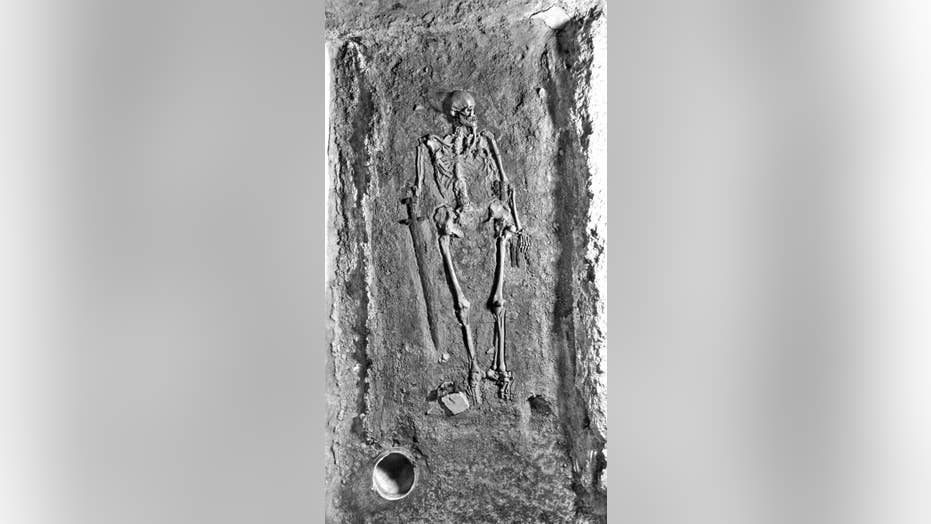 Archaeologists are shedding new light on a mysterious medieval skeleton that was discovered buried with a sword, ax and knives at Prague Castle during the 1920s.

The remains, which are from the 10th century, were found under the courtyard of the famous Czech castle in 1928.

The skeleton and the items were harnessed as a propaganda tool by both the Nazis and the Soviets in the turbulent decades that followed, as they were identified as Viking by the Nazis and as a Slavonic warrior by the Soviets, according to research published in the journal Antiquity.

More recently, they became part of the Czech independence movement.

The grave, shortly after excavation in 1928. (Institute of Archaeology of the CAS, Prague Castle Excavations)

The team of researchers include two emeritus professors from the U.K.’s University of Bristol.

"A number of studies have recently begun to re-interpret the remains and ours provides a new analysis,” said lead author Professor Nicholas Saunders, from Bristol's Department of Anthropology and Archaeology, in a statement.

“The goods found with the remains are a mix of foreign (non-Czech) items, such as the sword, axe and fire striker (a common piece of Viking equipment), and domestic objects, such as the bucket and the knives.”

Saunders noted that the sword is particularly noteworthy as it is the only one discovered in 1,500 early medieval graves at Prague Castle. "Perhaps he was a Slav from a neighbouring region, who had mastered Old Norse as well as Slavonic, or perhaps he regarded himself as a genuine Viking,” he said, adding that identities were complex in the medieval period.

Projects in other parts of Europe are also shedding fascinating new light on centuries-old burial sites.

An incredible grave in Sweden containing the skeleton of a Viking warrior, long thought to be male, was recently confirmed as female. The 10th-century grave, known as Bj. 581, was first discovered on the Swedish island of Bjorko in the late 19th century. Stunning artifacts found in the grave indicated that it belonged to a high-status Viking warrior, who, for over a century, was assumed to be male.

The Prague Castle, built in the 9th century, is the official office of the President of the Czech Republic. (AP)

The 10th-century grave, known as Bj. 581, was first discovered on the Swedish island of Bjorko in the late 19th century. Stunning

In a paper published in the journal Antiquity, the researchers responded to critics of the original study, explaining that they analyzed the correct skeleton and that there was only one set of human remains in the grave.

Workers preparing to lay new water pipes recently discovered a gruesome ancient burial site in the U.K. Some 26 human skeletons from the Iron Age and Roman periods were found at the site in Childrey Warren, Oxfordshire, some of which are believed to be ritual burials.