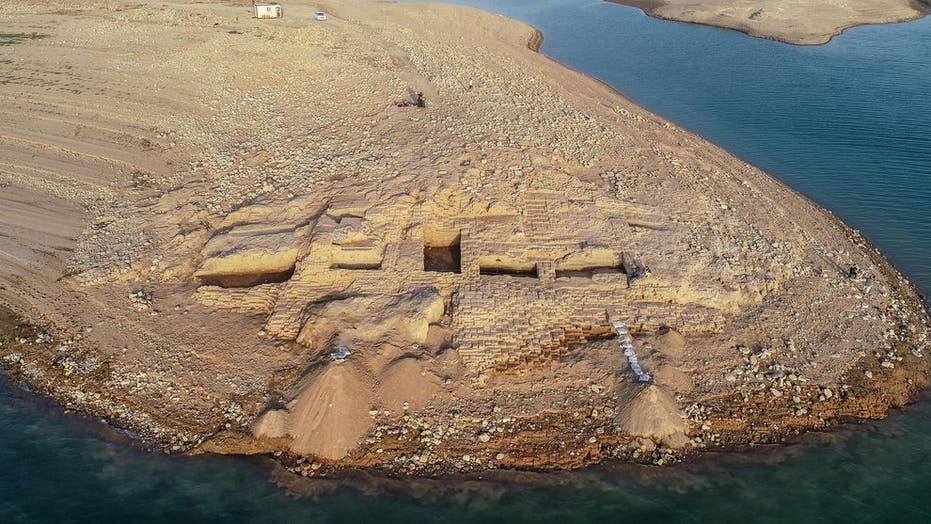 The incredible ruins of an ancient palace in Iraqi Kurdistan have emerged from the waters of the Tigris River.

A team of German and Kurdish archaeologists reports that, in fall 2018, receding waters in the Mosul Dam reservoir unexpectedly revealed the remains in the ancient city, Kemune.

The Bronze Age palace was revealed on the eastern bank of the Tigris river in Iraq’s Duhok province. As part of a project involving the University of Tübingen in Germany, the Kurdistan Archaeology Organization and Duhok Directorate of Antiquities, archaeologists identified a building with mud brick walls up to 2 meters (6.56 feet) thick.

Some of the building’s walls are more than 2 meters high and some of its rooms have plastered walls, according to Dr. Ivana Puljiz of the Tübingen Institute for Ancient Near Eastern Studies. “We have also found remains of wall paintings in bright shades of red and blue," she said in a statement, noting that murals were a feature of ancient palaces in the region.

A terrace wall on the Western side of the palace. (University of Tubingen and Kurdistan Archaeology Organization)

The ruins of the palace, which in ancient times stood on a terrace overlooking the Tigris Valley, are preserved to a height of about 23 feet.

The site was once part of the ancient Mittani empire, which encompassed much of modern-day Iraq and Syria from the 15th century to the 14th century B.C.

“The find is one of the most important archaeological discoveries in the region in recent decades,” said Kurdish archaeologist Dr. Hasan Ahmed Qasim in the statement.

An aerial view of Kemune Palace from the west. (University of Tubingen, eScience Center, and Kurdistan Archaeology Organization)

The area had been flooded following the construction of the Mosul Dam in the 1980s.  "We discovered the site of Kemune already in 2010 when the dam had low water levels; even at that time we found a Mittani cuneiform tablet and saw remains of wall paintings in red and blue,” said Qasim in the statement. “But we couldn’t excavate here until now.”

Experts are eager to gain new insight into the Mittani Empire by studying 10 tablets with Cuneiform writing that were discovered in the palace. One of the tablets indicates that Kemune was likely the ancient city of Zakhiku, which means that it may have existed for 400 years. "The Mittani Empire is one of the least researched empires of the Ancient Near East," said Puljiz.

Iraq continues to reveal its ancient secrets. Earlier this year, for example, a team of French archaeologists announced that it had located the remains of a lost ancient city in Iraqi Kurdistan.

A room at the palace during the excavation. (University of Tubingen and Kurdistan Archaeology Organization)

In 2017, archaeologists harnessed spy satellite imagery and drones to help identify the site of an ancient lost city in Northern Iraq.

Over the course of six excavations between 2012 and 2018, researchers uncovered the ancient city at Kunara, near the Zagros mountains. Previously, experts had been prevented from exploring the site, near the modern city of Sulaymaniyah, by Saddam Hussein’s regime and conflicts in the region.

The Qalatga Darband site overlooks the Lower Zab river at the western edge of the Zagros Mountains, is part of a historic route from ancient Mesopotamia to Iran.

Kemune Palace from the south. (University of Tubingen and Kurdistan Archaeology Organization)

A mural fragment discovered at the palace. (University of Tubingen and Kurdistan Archaeology Organization)

In another project, experts from the University of Pennsylvania and Harvard have scanned declassified Cold War-era images from U2 spy planes to reveal ancient structures across the Middle East.