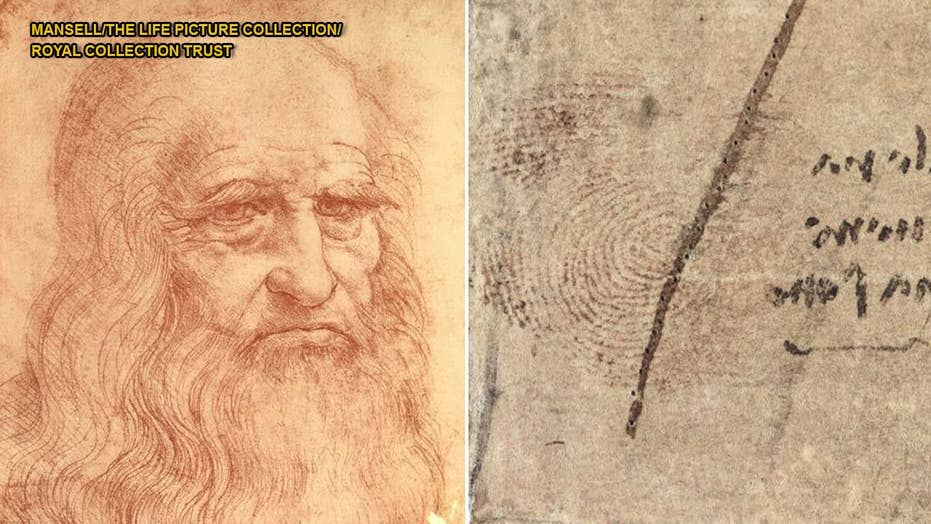 Leonardo da Vinci's thumbprint has been discovered in a drawing by the Renaissance Master that is owned by Queen Elizabeth II. The hidden detail is revealed in a new book 'Leonard da Vinci: A Closer Look.' The thumbprint was found on 'The cardiovascular system and principal organs of a woman,' an anatomical drawing by Leonardo that dates to around 1509 and 1510.

Leonardo da Vinci’s thumbprint has been discovered in a drawing by the Renaissance Master that is owned by Queen Elizabeth II.

The hidden detail is revealed in a new book “Leonard da Vinci: A Closer Look.” The book analyzes 80 of Leonardo’s drawings from the Royal Collection, shedding new light on the famous artist’s craft.

The thumbprint was found on “The cardiovascular system and principal organs of a woman,” an anatomical drawing by Leonardo that dates to around 1509 and 1510.

“At the center of the sheet’s left edge, the print is in the same reddish-brown ink as the ink lines of the drawing,” explains the Royal Collection Trust, in a statement. “It can only be concluded that, after creating the work, the left-handed Leonardo picked up the sheet with inky fingers.”

The book’s author Alan Donnithorne is the former head of paper conservation at the Royal Collection Trust. In his research, he used X-ray fluorescence, microscopy and ultraviolet imaging to study the drawings.

In the statement, Donnithorne notes that Leonardo used a host of different paper types. A close analysis of “The head of an old bearded man in profile,” a drawing from 1519, shows that the paper contains straw and fragments of rope that the papermaker used to repair the sheet.

“The paper of ‘A sketch of the viscera,’ c.1515–16, contains fragments of wood chips, hair, wool and insect parts, possibly sweepings from the mill floor,” explains the Royal Collection, in its statement.

Other artworks have shown their secrets in recent years. Last year, for example, scientists harnessed sophisticated X-ray and imaging technology to reveal a lost painting and other details hidden in a Picasso masterpiece.

The painting, “La Miséreuse accroupie” (The Crouching Woman), is a major work from Picasso’s Blue Period. High-tech analysis of the 1902 painting, however, revealed how Picasso painted over a landscape by another painter. Buried images linked to other works by Picasso were also found.

In 2017 a secret ‘ghostly’ portrait of Mary, Queen of Scots was discovered beneath a 16th-century painting. X-ray technology was used to reveal the unfinished portrait of the Scottish Queen, who reigned from 1542 to 1567.

Da Vinci continues to be a source of fascination for historians.

Last summer experts in Italy said they had found the earliest surviving work by Leonardo da Vinci. The small glazed terracotta tile, which bears the date “1471,” is described as a self-portrait of the artist as the Archangel Gabriel.

File photo - A cleaner vacuums in front of a Leonardo da Vinci self-portrait drawn around 1515 or 1516, during the inauguration of the exhibition "Leonardo da Vinci, the European Genius" in Brussels, August 17, 2007. (REUTERS/Francois Lenoir)

May 2, 2019, also marks the 500th anniversary of the Renaissance Master’s death.

To commemorate the anniversary, the British Library in London is set to showcase a number of Leonardo’s most important notebooks, all written in his famous “mirror-writing.”

In addition to using his own shorthand, Leonardo also wrote his personal notes starting on the right-hand side of the page. It is not clear whether this so-called mirror writing was a way to keep his notes private or simply a means to prevent smudging, as Leonardo was left-handed.