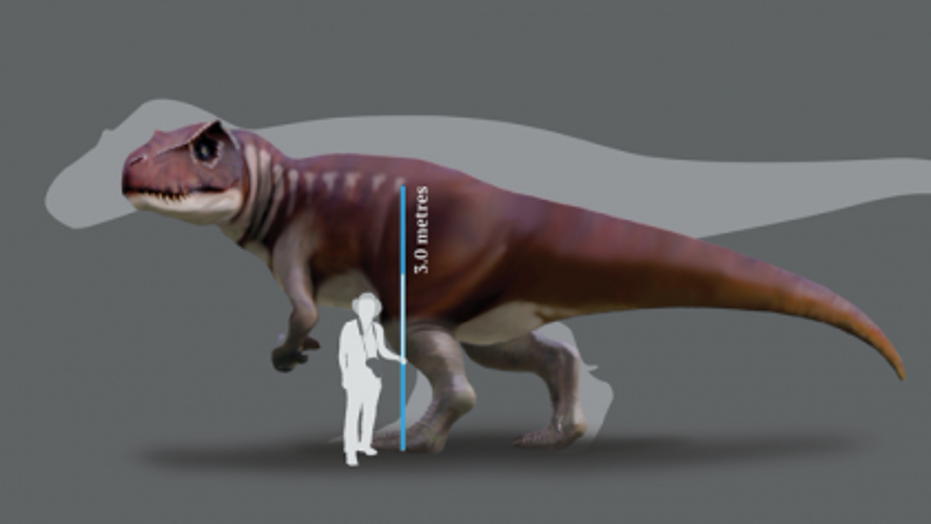 The discovery of huge prehistoric footprints has shed new light on what has been described as Australia’s “Jurassic Park”.

Experts at the University of Queensland, led by paleontologist Dr. Anthony Romilio, studied dinosaur footprint fossils in Southern Queensland that were dated to between 165 million and 151 million years ago.

The footprints, which are from the later Jurassic period, offer a fresh glimpse into the time of the dinosaurs. “I’ve always wondered, where were Australia’s big carnivorous dinosaurs?” Romilio said, in a statement. “But I think we’ve found them, right here in Queensland.”

The tracks, which have been known about for half a century, were made by dinosaurs walking through prehistoric swamp forests, he explained. While many of the tracks belong to theropods, the group of dinosaurs that includes velociraptors, other massive tracks were also spotted.

A reconstruction of a Jurassic dinosaur track-maker from southern Queensland in front of a silhouette of the largest known T. rex. (The University of Queensland)

“Most of these footprints are around 50 to 60 centimetres [19.7 to 23.6 inches] in length, with some of the really huge tracks measuring nearly 80 centimetres [31.5 inches],” he said. “We estimate these tracks were made by large-bodied carnivorous dinosaurs, some of which were up to three metres high [9.8 feet] at the hips and probably around 10 metres [32.8 feet] long.

Romilio notes that Tyrannosaurus Rex, which was in the region about 90 million years later, was about 10.7 feet high at the hip and between 39.4 feet and 42.7 feet in length. “The Queensland tracks were probably made by giant carnosaurs – the group that includes the Allosaurus,” he said. “At the time, these were probably some of the largest predatory dinosaurs on the planet.”

“Finding these fossils has been our way of tracking down the creatures from Australia’s Jurassic Park,” the paleontologist added.

The research has been published in the journal Historical Biology.

Australia is no stranger to dinosaur discoveries. In another project, an unusual “toothless” dinosaur was recently identified by paleontologists in Australia.

In 2019, for example, researchers discovered the fossilized remains of a herd of dinosaurs in an opal mine in the Australian outback.