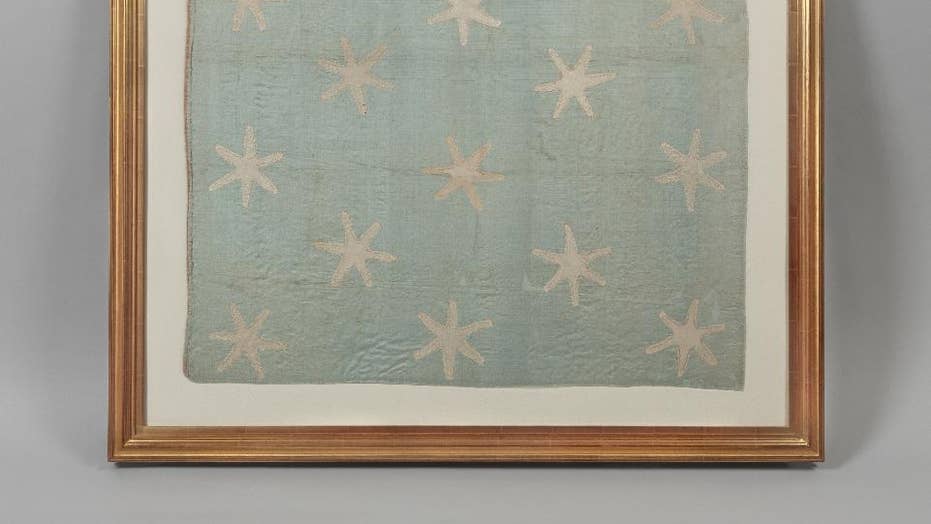 See an iconic flag that demarcated George Washington’s presence on the battlefield during the Revolutionary War. Why do the stars on it look the way they do and where is the flag being displayed?

The headquarters flag used by George Washington during the Revolutionary War will go on display in Philadelphia next month, marking its first public appearance in the city since the war itself.

The rare faded and fragile blue silk flag, which measures two feet by three feet, will be on display in the Museum of the American Revolution from Flag Day, June 14, through June 17. The display will also mark the flag’s first public appearance in Pennsylvania in decades.

Adorned with 13 six-pointed stars to represent the original 13 colonies, the artifact is thought to be the earliest surviving 13-star American flag.

The flag will be joining another historic Washington artifact in the Museum in Philadelphia’s Old City. The General’s Revolutionary War field tent is on permanent display at the Museum of the American Revolution, where it is displayed in a dedicated theater.

Described as ‘the first Oval Office,’ the canvas tent was Washington’s Command Center throughout the Revolutionary War. The tent went on display when the Museum opened its doors in April 2017.

“This is an incredibly special opportunity to witness a true American treasure, General George Washington’s personal flag, under the same roof as the tent that served as his command center throughout the war,” said Museum Chairman and Acting CEO General John P. Jumper, in a statement emailed to Fox News. “The adoption of the U.S. flag took place right here in Philadelphia, so there is truly no better place to celebrate Flag Day and everything it stands for.”

EXTREMELY RARE COPY OF THE DECLARATION OF INDEPENDENCE, ONCE HIDDEN BEHIND WALLPAPER, SURFACES

The historic flag was donated to the Valley Forge Historical Society by descendants of George Washington’s sister, Betty Washington Lewis, in the early 20th century. The society subsequently transferred the collection, including the Standard, to the Museum of the American Revolution.

The Museum will also display a replica of the flag that traveled into space with astronaut John Glenn in 1998 as part of the buildup to the bicentennial commemoration of Washington’s death in 1799.

Revolutionary War artifacts offer a fascinating glimpse into the events that shaped America. Other items in the Museum of the American Revolution’s collection include a host of Revolutionary War-era weapons, artworks and documents. A young American sailor’s journal detailing his harrowing experiences during War, for example, was recently donated to the Museum.

In August 2017, a Revolutionary War-era knife was unearthed during an archaeological dig at Colonial Michilimackinac in Mackinaw City, Michigan, the latest in a series of amazing finds at the site.

The following month, archaeologists in Boston discovered a centuries-old outhouse that may be linked to the family of Patriot Paul Revere.