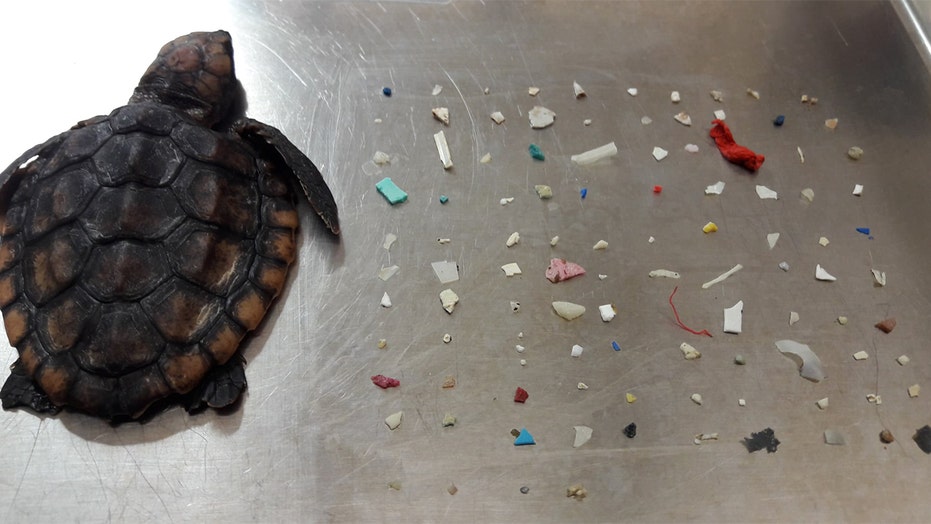 A tiny turtle that washed up on a shoreline in South Florida is just the latest fatality of plastic pollution plaguing marine life.

Gumbo Limbo Nature Center in Boca Raton posted a picture on Facebook of the deceased turtle alongside hundreds of pieces of plastic that became lodged in its intestinal tract.

"This turtle, which would fit in the palm of your hand, had eaten 104 pieces of plastic," the nature center said.

Scientists warn that when plastic is dumped into the ocean as pollution, they break down into microplastics that get eaten by sea creatures.

According to Gumbo, it's washback season, the period between August and November where young sea turtles wash ashore due to heavy winds and surf. Although volunteers and environmentalist groups attempt to rescue the turtles when they get caught on shorelines or wrapped in seaweed, they aren't always successful because of the added dangers of pollution.

"Unfortunately, not every washback survives. 100% of our washbacks that didn't make it had plastic in their intestinal tracts," the center said.

"This is a sad reminder that we all need to do our part to keep our oceans plastic free."

The Sea Turtle Conservancy estimates that over 1 million marine animals, including mammals, fish, sharks, turtles, and birds, die each year due to plastic debris in the ocean and there are likely 100 million tons of plastic in oceans around the world.

Conservationists estimate that another 60 billion pounds of pollution will be produced in 2019.