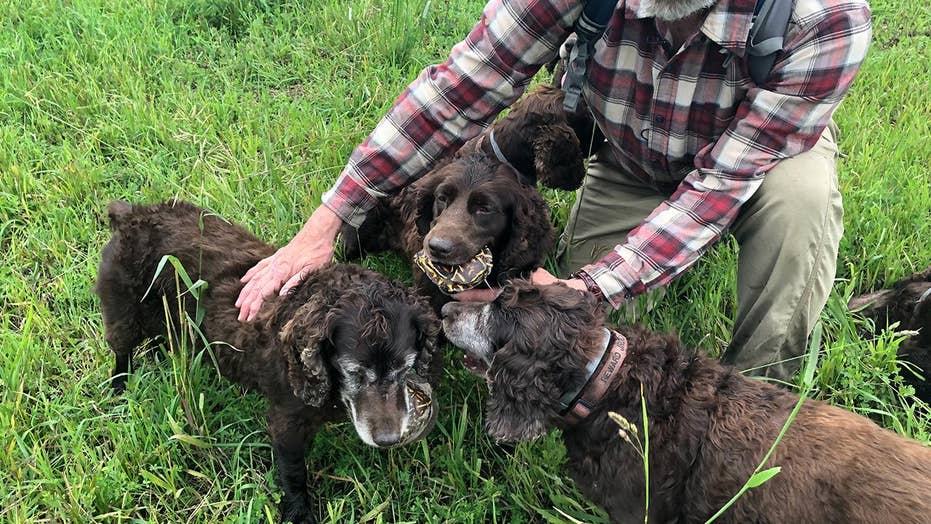 “I'm the only person in the world who travels all over the United States with seven dogs doing this for clients,” Rucker said jokingly before adding, “probably very few people would want this lifestyle because I sleep in a tent every night.”

It’s a long way from their home of Montana for all eight of them. But it’s prime time for finding turtles, according to Rucker.

He travels throughout the Midwest from about April to August in his van -- packed with a tent for shelter, food and water for him and the dogs -- helping clients find a threatened species that can only be found where the tall grass prairie grows.

4 PUPS OF ENDANGERED SPECIES OF WOLF BORN AT CHICAGO ZOO

Measuring no more than 6 inches in length, the ornate box turtle is listed as a threatened species in Illinois.

On a recent day, the client is Nachusa Grasslands in Franklin Grove, Ill. Rucker and his seven dogs, Lazarus, Scamp, Mink, Jaybird, Jenny Wren, Rooster, and Tango, found 14 turtles in about an hour.

“The dogs themselves are incredible tools for conservation,” Dr. Matt Allender, director of the wildlife epidemiology lab at the University of Illinois, said. “They allow us to find lots of turtles to assess health in real time.  When we're out trying to search for turtles, humans can find maybe one turtle every two and a half-to-four hours of searching time, whereas dogs can find four in an hour.”

The land at Nachusa is wet and it’s hard to get around. A group of veterinarian students follow the dogs around the deep holes left by cows from grazing on the land.

The deep holes and muddy ground filled with cow droppings doesn’t stop nor slow down the dogs from the task at hand.

“Find turtle, find turtle,”  Rucker calls to the dogs. “Follow Mink. Look at the tail wagging. She’s on to something.”

He trusts Mink the most to find box turtles, so they leave the dog alone for a bit while she searches off-trail. The other six dogs are ushered to a different path.

The turtles have become endangered because farms have been encroaching on their property. They need tall grass to live and little of it is left.

“The ornate box turtles are a really important part of the prairie ecosystem, which once covered the majority of states like Illinois, Iowa, Missouri, Nebraska, and Kansas,” said Elizabeth Bach, ecosystem restoration scientist for Nachusa Grasslands. “With settlement from European settlers, most of that land was converted to agriculture practices. The result is we've lost over 99 percent of the historic range of that tall grass prairie here in Illinois. Species like the ornate box turtle really suffer from that. They no longer have habitat and they need space to move around.”

The goal for scientists at Nachusa Grasslands is to restore the tall-grass prairie. That’s where the turtles come in handy.

These turtles are small in size but they play a big role in diagnosing the land they live on.

Once the turtles are found, some of the students will tag the location where the turtle is found while the other students examine the species briefly to determine if it’s a recapture or a new turtle discovered. They place the turtle in a breathable canvas bag before it’s examined further.

"We'll do physical examinations, looking at the eyes, ears, nose, throat, and look at the condition of the shell," said Dr. Allender. "All of these things are indicators of how they're utilizing the environment, and their overall health and wellness."

The interest in the ornate box turtles reaches beyond Illinois.  In other Midwestern states like Iowa, biologists say studying this particular turtle is key in preventing the loss of a single species, which can upset the ecosystem.

“There's been a number of reports recently about the number of species that are expected to go extinct […]biologists have been talking about species loss for a long time,” said Andy McCollum, professor of biology at Cornell College. “I think a lot of people think that there is no economic benefit to having a viable population of native species. But we need a working environment for all of the various ecosystem services that are provided for things like clean water and clean air. So, these turtles are perhaps a very small part of researching that.”

With the help of Rucker and his dogs, conservationists’ groups like Nashua Grasslands are trying to bring back some of what they say this region lost.

“It's just a labor of love,” Rucker said.  “For me, I love dog work and it gives me a reason to try to stay a young man, even though I'm 71 years old. It's sort of the driving force in my life right now. I hope to leave the world a little bit better place through my turtle work.”