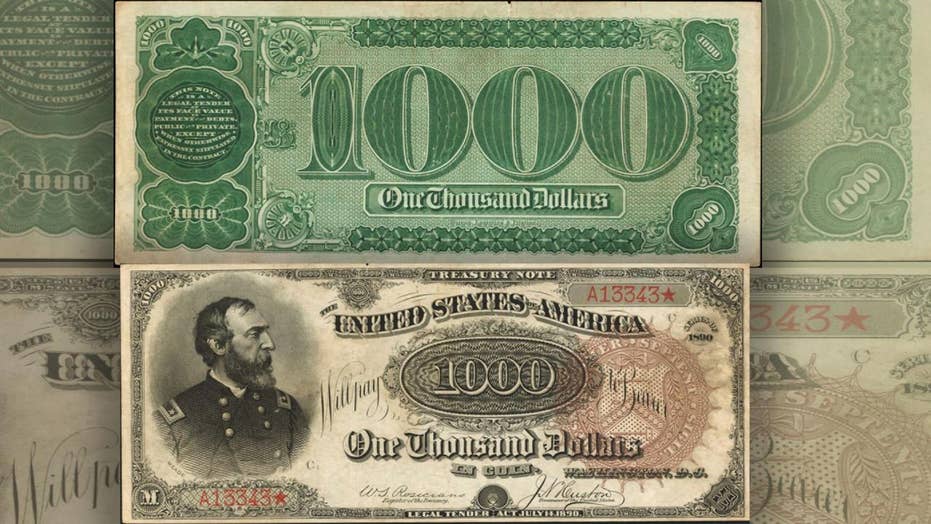 'Holy Grail of paper money' sells at auction for $2M

An extremely rare $1,000 bill described as the “Holy Grail of paper money” has been sold at auction for just over $2 million.

The 1890 Treasury Note is dubbed the “Grand Watermelon” on account of the large green zeros on the back of the bill. Major General George Meade, the commander of Union forces at the Battle of Gettysburg, is shown on the bill’s face.

$1 MILLION FOR A PENNY? EXTREMELY RARE 1792 COIN SET FOR AUCTION

When it was last sold, in 2005, the note became the first ever paper bill to break the $1 million mark.

One of the very first pennies produced in the U.S., a 1792 Birch Cent, will be auctioned at the Whitman Expo on Friday. The coin is estimated to be worth $1 million.

RARE NICKEL UP FOR AUCTION IN PHILADELPHIA BOUGHT FOR $4.56 MILLION

Commissioned by Thomas Jefferson, only a handful of Birch Cents were minted as an example of what the newly-formed U.S. government was considering producing. The coins were seen firsthand by Jefferson and George Washington, according to Stack’s Bowers.

Rare coins are big business. In 2015, another Birch cent sold for almost $1.2 million at auction, the Guardian reports.

Earlier this year, a small $5 gold coin produced by the San Francisco Mint during the height of the California Gold Rush was estimated to be worth “millions of dollars.” The coin’s owner had initially thought that the money was fake.