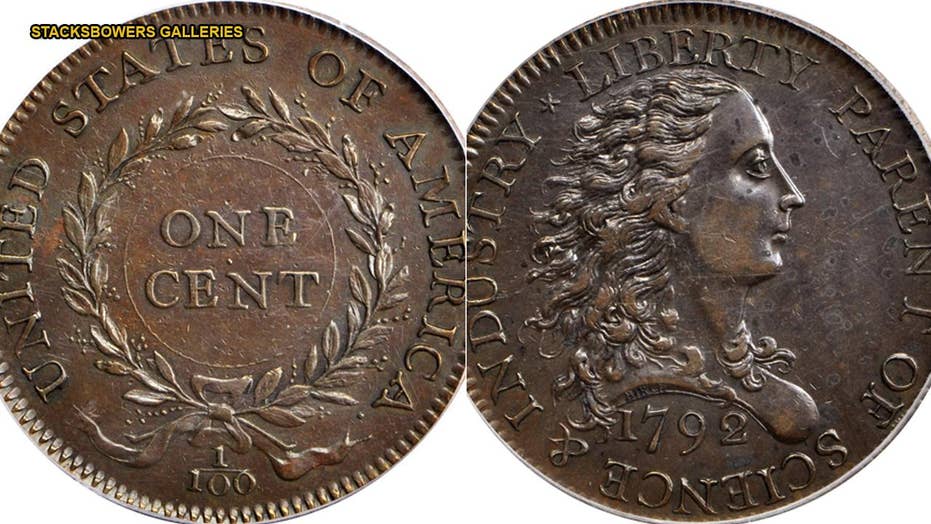 One of the very first pennies produced in the U.S., the 1792 Birch Cent, will soon be auctioned off and is estimated to be worth $1 million.

One of the very first pennies produced in the U.S., estimated to be worth $1 million, will be auctioned in Baltimore next week.

The 1792 Birch Cent will be auctioned by Stack’s Bowers Galleries at the Whitman Expo in Baltimore on Oct. 26.

Commissioned by Thomas Jefferson, only a handful of Birch Cents were minted as an example of what the newly-formed U.S. government was considering producing. The coins were seen first hand by Jefferson and George Washington, according to the auction house.

RARE NICKEL UP FOR AUCTION IN PHILADELPHIA BOUGHT FOR $4.56 MILLION

“This is the first American cent ever produced and represents a very unique piece of numismatic history,” said Brian Kendrella, president of Stack’s Bowers Galleries, in a statement. “It is the only one of its kind, making it a very exclusive coin to own. The collector who ends up with this Birch Cent will have the satisfaction of knowing that it very likely was held by our founding fathers, making it a very special piece of American history as well.”

Four types of Birch Cent were originally struck. This cent, known as the Judd-3, is the only one known to exist without lettering at its edge, says Stack’s Bowers Galleries.

Rare coins are big business. In 2015, another Birch cent sold for almost $1.2 million at auction, the Guardian reports.

Earlier this year, a small $5 gold coin produced by the San Francisco Mint during the height of the California Gold Rush was estimated to be worth “millions of dollars.” The coin’s owner had initially thought that the money was fake.