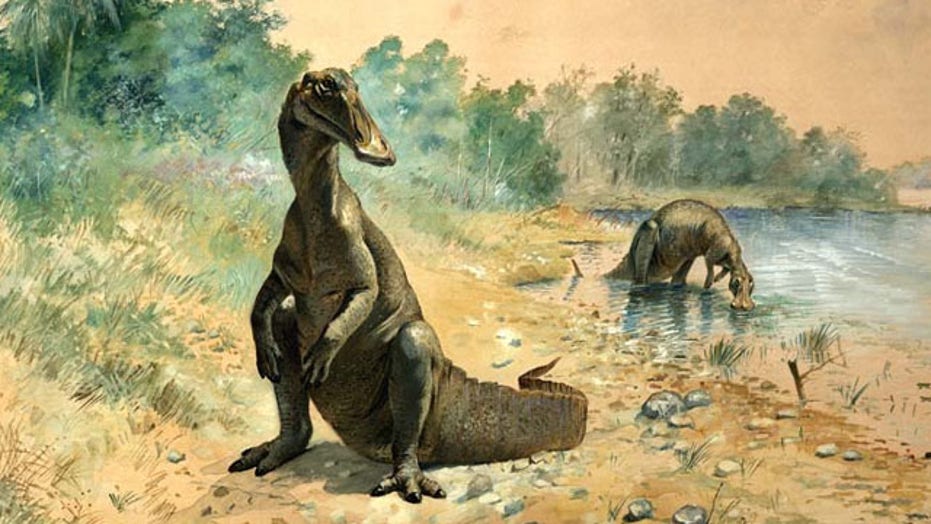 The research looked at fossilized teeth of a hadrosaur and concluded that its journeys were short, roughly 50 miles. The experts used strontium isotope ratios from fossilized enamel in teeth to come up with their conclusion.

"Results from this study are consistent with a range or migratory pattern between Dinosaur Provincial Park and a contemporaneous locality in the South Saskatchewan River area, Alberta, Canada," the researchers wrote in the study's abstract.

An early restoration of a duck-billed hadrosaur. (Charles R. Knight)

"These results suggest the continent-wide distribution of some hadrosaur species in the Late Cretaceous of North America is not the result of extremely long-range migratory behaviors," the researchers added in the abstract.

The study's lead author, David Terrill, said the findings suggest that the hadrosaur "was unlikely to have participated in continent-scale migrations," according to British news agency SWNS. Fossilized evidence of hadrosaurs has been found in places such as Mexico, Alaska, as well as the aforementioned Alberta, Canada.

In April 2019, a study was published that said duck-billed dinosaurs roamed the Arctic 69 million years ago.

Hadrosaurs were some of the most common dinosaurs, ranging in size between 10 and 65 feet. Their teeth, which were used for grinding needles, twigs and fruit, were regrown every six to 12 months, making them "an ideal target for dinosaur migration studies," Terrill added.

The amount of hadrosaur fossils that have been discovered in Dinosaur Provincial Park suggests that there was plenty of food for them to eat there, Terrill explained. "Biological productivity rates must have been quite high all year to support a large population of resident hadrosaurs. This ability to exploit different vegetation sources may have been key to the success of hadrosaurs in the area, allowing them to avoid large scale migrations."

The study has been published in the scientific journal Biology Letters.

In February, a type of cancer that still afflicts humans was found in a small hadrosaur that was "common in the world 66-80 million years ago," also discovered at the Dinosaur Provincial Park in southern Alberta.

Dinosaurs were wiped out 65 million years ago by an asteroid that hit Earth in what is now the Yucatan Peninsula in Mexico. It not only wiped out the dinosaurs but it also killed nearly 75 percent of all species on the planet. It may have also acidified Earth's oceans after impact, according to a study published in October 2019.