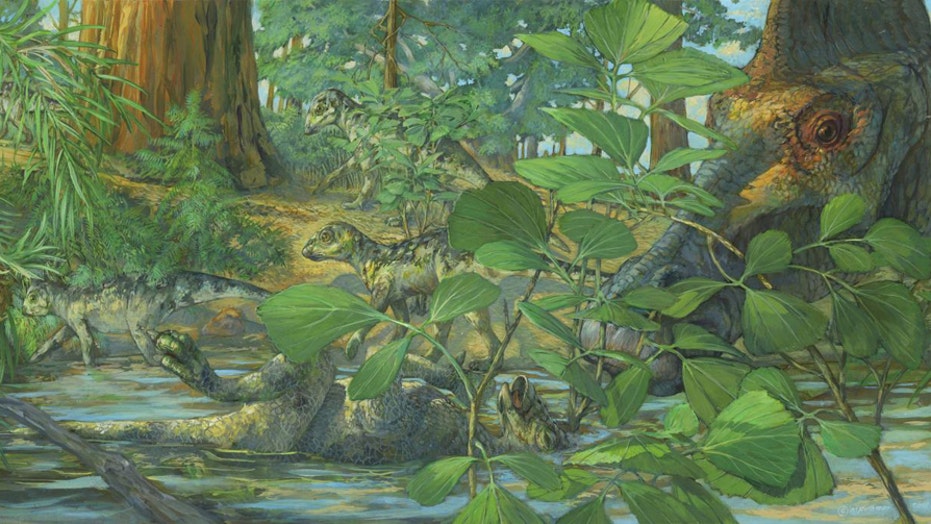 A shocking new study suggests that researchers have found traces of DNA inside a fossilized dinosaur skull.

The study, published in the scientific journal National Science Review, claims that signatures of cartilage cells, chromosomes and DNA were preserved in a 75-million-year-old baby duck-billed dinosaur, known as a Hypacrosaurus. Two cartilage cells were supposedly found linked together and material that resembles a cell nucleus was also spotted.

"I couldn't believe it, my heart almost stopped beating," said the study's lead author, Alida Bailleul, of the discovery, in a statement.

Reconstruction of the nesting ground of Hypacrosaurus stebingeri from the Two Medicine formation of Montana. In the center can be seen a deceased Hypacrosaurus nestling with the back of its skull embedded in shallow waters. A mourning adult is portrayed on the right. (Credit: Michael Rothman, Science China Press)

In their study, the researchers stated they found "the organic matrix surrounding the fossilized cartilage cells reacted to antibodies of Collagen II," described as "the dominant protein in cartilage in all vertebrates," according to the statement accompanying the study.

"This immunological test supports the presence of remnants of original cartilaginous proteins in this dinosaur," the study's co-author, Mary Schweitzer, added.

"The preservation of chromosomes is extraordinary and has only been reported once before in 2014 in a fossil fern (much older than our dinosaurs)," Bailleul said in an email to Fox News. "Such type of cellular preservation is truly incredible. We also did chemical tests that bind to DNA in other cells that we extracted, and the tests were positive, inside the isolated dinosaur cells, exactly where nuclei and chromosomes should be. Therefore, we concluded that there must still be some dinosaur DNA preserved, but we do not know how well preserved it is. We do say that nothing suggests that it is contamination, and that it is most likely remnants of fossilized dinosaur DNA."

The claim has drawn mixed reactions from the scientific community.

Evan Saitta, a researcher from the Integrative Research Center at the Field Museum of Natural History in Chicago, told Gizmodo that the organic material that has been discovered "are understood to be among the least stable biomolecules over long periods of time and under the heat of deep burial during fossilization.” However, Saitta, who was not involved in the study, admitted the age of the samples is "striking."

To date, the oldest DNA sample found has been from a 700,000-year-old horse in 2015, and the oldest protein sample discovered to date is from a 3.8-million-year-old ostrich egg, according to a 2016 release from the University of Sheffield.

Researchers recently discovered what is believed to be the first extraterrestrial protein in a meteor that fell to Earth 30 years ago.

Bailleul acknowledged the criticism, saying it's due to the researchers hypothesizing that DNA preservation is longer than commonly accepted. "It is part of being a scientist to be scrutinized, and it's okay," Bailleul told Fox News. "However, we do not simply make a claim, we have strong data and arguments to support our hypothesis."

The researchers noted that it's possible the skulls may have become contaminated and do not explicitly state that what is discovered is dinosaur DNA — though that is a "reasonable interpretation,” Schweitzer told Gizmodo — but it's likely that what has been discovered is significantly older than any other organic material ever uncovered.

"Specific DNA staining is only observed inside the isolated cells, suggesting endogenous nuclear material survived fossilization," the researchers wrote in the study's abstract. "Our data support the hypothesis that calcified cartilage is preserved at the molecular level in this Mesozoic material, and suggest that remnants of once-living chondrocytes, including their DNA, may preserve for millions of years."

Nonetheless, that does not mean "Jurassic Park" is coming anytime soon.

The organic material cannot yet be extracted so it cannot be sequenced. It may also be that the material is in minuscule fragments or warped, thereby impeding any further exploration of it, National Geographic reported. “We’re not doing the Jurassic Park thing,” Bailleul told the news outlet.

DINOSAUR EXTINCTION WAS 'ALL ABOUT THE ASTEROID,' CASTING DOUBT ABOUT VOLCANO'S IMPACT, NEW STUDY SAYS

“This research is still very much in its infancy, but the possibilities are absolutely thrilling if we suspend our disbelief, dig into the data and continue to test and refine our ideas about molecular preservation in fossils,” Evans said.