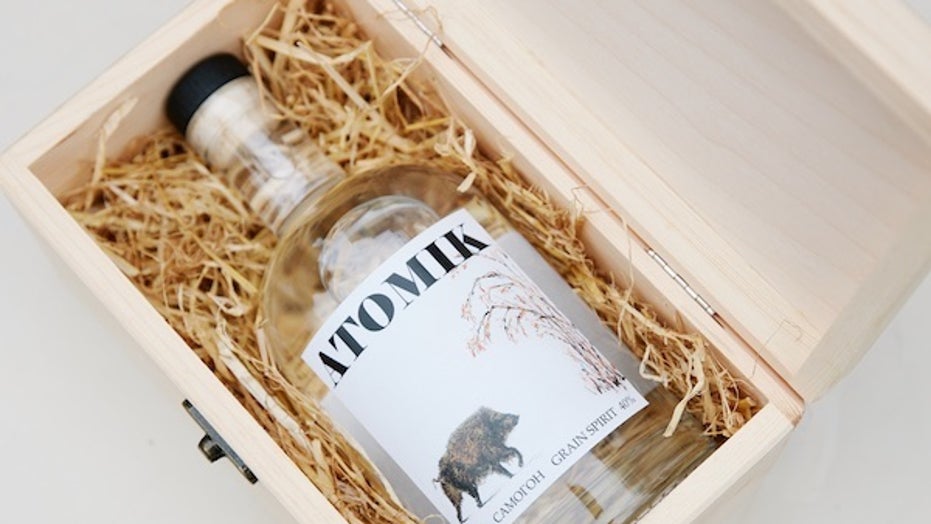 Scientists have produced vodka made from crops grown in the abandoned zone around the site of the Chernobyl nuclear explosion.

“ATOMIK” vodka is the result of a three-year research project conducted by an international team of scientists. Experts carefully analyzed the transfer of radioactivity to crops grown in the exclusion zone around the site of the world’s worst nuclear disaster.

While some radioactivity was discovered in the grain, they say that the artisanal vodka itself is safe for consumption. “Because distilling reduces any impurities in the original grain, the only radioactivity the researchers could detect in the alcohol is natural Carbon-14 at the same level you would expect in any spirit drink,” they explain, in a statement.

The 1986 explosion at the Chernobyl nuclear plant in Ukraine sparked a widespread environmental catastrophe. Thirty workers died either from the explosion at the number four reactor or from acute radiation sickness within several months. The accident exposed millions in the region to dangerous levels of radiation and forced a wide-scale, permanent evacuation of hundreds of towns and villages in Ukraine and Belarus.

The final death toll from Chernobyl is subject to speculation, due to the long-term effects of radiation. Estimates range from 9,000 by the World Health Organization to one of a possible 90,000 by the environmental group Greenpeace.

"ATOMIK" vodka is made from crops grown in the nuclear disaster's exclusion zone. (The University of Portsmouth)

Scientists see the production of Chernobyl vodka as an opportunity to contribute to the area’s economic regeneration.

“I think this is the most important bottle of spirits in the world because it could help the economic recovery of communities living in and around the abandoned areas,” said Jim Smith, professor of environmental science at the University of Portsmouth in the U.K. “Many thousands of people are still living in the Zone of Obligatory Resettlement where new investment and use of agricultural land is still forbidden.”

A 1986 file photo of an aerial view of the Chernobyl nuclear plant in Chernobyl, Ukraine showing damage from an explosion and fire in reactor four on April 26, 1986 that sent large amounts of radioactive material into the atmosphere. (AP/File)

Smith wants to give 75 percent of the profits from ATOMIK back to the affected community.

With this goal, “The Chernobyl Spirit Company” is being set up to produce and sell ATOMIK.

“We don’t think the main Exclusion Zone should be extensively used for agriculture as it is now a wildlife reserve,” said Smith, in the statement. “But there are other areas where people live, but agriculture is still banned.”

A helicopter dropping concrete onto the fourth reactor of the Chernobyl nuclear power after its explosion is seen in this 1986 file picture.  (REUTERS)

The distilled alcohol was diluted with water from the deep aquifer in Chernobyl town about 6.2 miles south of the nuclear reactor. Scientists say that the water has similar chemical properties to groundwater in the Champagne region of France, and is also free from contamination.

The water and alcohol were analyzed by the Ukrainian Hydrometeorological Institute, and laboratories run by the U.K.’s University of Southampton, the University of Portsmouth, as well as an independent wine and spirits testing laboratory.

“[Thirty-three] years on, many abandoned areas could now be used to grow crops safely without the need for distillation,” Smith added. “We aim to make a high-value product to support economic development of areas outside the main Exclusion Zone where radiation isn’t now a significant health risk.”

The number four reactor at the Chernobyl nuclear plant is seen in this December 2, 1986 file photo, after completion of work to entomb it in concrete following the explosion at the plant. (Reuters)

The scientists’ report has been “positively received” by the State Agency of Ukraine for Exclusion Zone Management.

“We welcome this initiative to use abandoned lands to help local communities,” Oleg Nasvit, the agency’s first deputy head, in the statement. “It is important that we do everything we can to support the restoration of normal life in these areas whilst always putting safety first.”

“I’d call this a high-quality moonshine - it isn’t typical of a more highly purified vodka, but has the flavor of the grain from our original Ukrainian distillation methods – I like it,” Nasvit added.

A panel with a portrait of Soviet state founder Vladimir Lenin and an abandoned building are seen at the exclusion zone around the Chernobyl nuclear reactor in the abandoned village of Orevichi, Belarus, March 12, 2016. (REUTERS/Vasily Fedosenko)

The researchers say that there are some legal issues to be resolved, but The Chernobyl Spirit Company is aiming to start small scale production of ATOMIK sometime this year.

The terrible environmental fallout of Chernobyl is still being felt. A wild boar with more than 10-times the safe limit of radiation, for example, was killed in 2017 by hunters hundreds of miles away in Sweden.

INSIDE THE NEW EFFORT TO ENTOMB CHERNOBYL'S WRECKAGE

File photo - a wild boar runs in the exclusion zone around the Chernobyl nuclear reactor near the village of Babchin, some 217 miles southeast of Minsk, January 9, 2009.

The huge “sarcophagus” built to encase Chernobyl’s nuclear reactor after the 1986 explosion is now being dismantled because experts warn that it may collapse. For nine years, workers have been constructing a new 32,000-ton shell, known as the Safe Confinement Structure, around the sarcophagus.

The site of the Chernobyl nuclear power plant is, however, getting a new lease on life thanks to the installation of solar panels.

There's been renewed interest in the 1986 disaster following the release of the popular HBO mini-series, "Chernobyl."