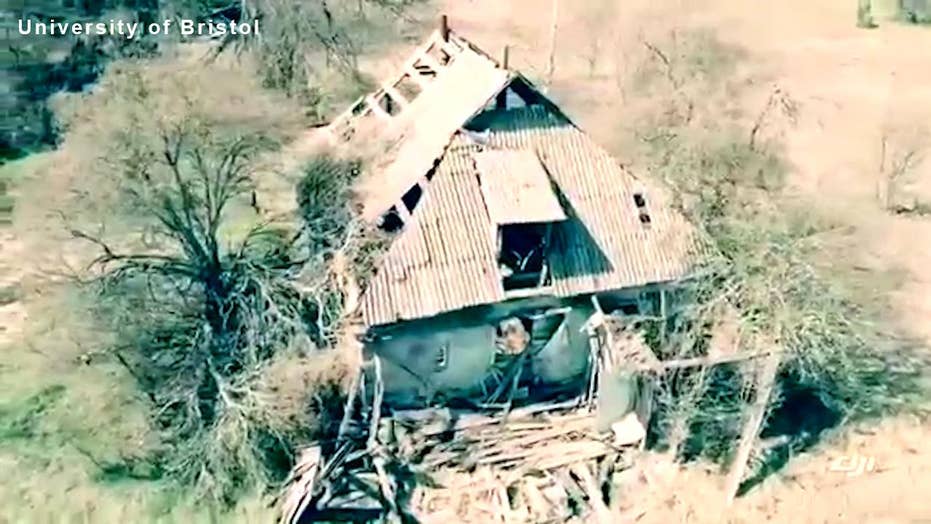 Incredible drone video: Specially-equipped drones were used to fly over Chernobyl’s ghostly Red Forest, which is one of the most radioactive sites on the planet, to map the extent of its contamination.

Chernobyl’s ghostly Red Forest, one of the most radioactive sites on the planet, has been mapped by specially-equipped drones to measure the extent of its contamination.

Researchers from the U.K.’s University of Bristol, working as part of the National Centre of Nuclear Robotics (NCNR) recently traveled to the Chernobyl exclusion zone where they harnessed drones to gain fresh insight into radiation levels at the stricken forest. This involved the first ever use of an Unmanned Aerial Vehicle (UAV) to measure gammas and neutrons at the site, as well as the first use of a fixed-wing drone for Chernobyl radiation mapping.

As a result of the survey, radioactive hotspots were found that were previously unknown to local authorities in Ukraine, according to the University of Bristol.

A cloud of radioactive particles from the disaster reached other parts of Europe, such as Sweden. The lingering effects of the disaster can still be felt around Chernobyl.

The University of Bristol scientists used the drones to complete the comprehensive scan of the Red Forest, a radiation-ravaged area of woodland located near the Chernobyl plant that covers around 4 square miles. The forest earned its name because the radiation turned the trees a ginger-brown color, according to LiveScience.

The drone survey identified an area just a few kilometers south of the forest as a radiation hotspot, according to the BBC. The area had been used to separate soil during the Chernobyl cleanup operation, the BBC reported.

File photo: Part of the Red Forest, which was formerly known as the Wormwood Forest. (Photo by Vitaliy Holovin/Corbis via Getty images)

Scientists started their drone mapping project at the village of Buriakivka, which is located about 8 miles from the epicenter of the disaster. Deemed the lowest risk site in the survey, the drones captured eerie images of long-abandoned buildings in the doomed village. They also surveyed the partially-demolished settlement of Kopachi before mapping the Red Forest, according to the NCNR.

Working with Ukrainian scientists, the U.K. researchers flew 50 drone sorties over a 10-day period, spending a total of 24 hours in the air, mapping a total of 5.8 square miles. The entire Chernobyl exclusion zone covers just over 1,000 square miles.

In 2017, scientists published a new theory on the Chernobyl disaster that could shed fresh light on the world’s worst nuclear accident.

In an article published in the journal Nuclear Technology, experts said that the first of two explosions reported by eyewitnesses was a nuclear, not a steam explosion, as is widely thought. Instead, the researchers believe that the first explosive event noted by eyewitnesses was a jet of debris ejected to an altitude of almost 2 miles by a series of nuclear explosions within the Chernobyl reactor. Some 2.7 seconds later, they say, a steam explosion ruptured the reactor and sent more debris into the atmosphere at lower altitudes.

File photo: The Red Forest is one of the most radioactive sites on Earth. (Photo by Vitaliy Holovin/Corbis via Getty images)

The disaster shone a spotlight on lax safety standards and government secrecy in the former Soviet Union. The explosion on April 26, 1986, was not reported by Soviet authorities for two days, and then only after winds had carried the fallout across Europe and Swedish experts had gone public with their concerns.

There are varying estimates for the final death toll from Chernobyl, due to the long-term effects of radiation. In 2005, the International Atomic Energy Agency estimated that the total death count from the disaster is around 4,000, whereas the World Health Organization has estimated 9,000 deaths.

‘DISASTER WORSE THAN CHERNOBYL’ LOOMS AS ANCIENT ANTHRAX SPORES COULD BE BLASTED INTO THE SKY BY ‘FROZEN METHANE BOMBS’, SCIENTISTS WARN

Environmental group Greenpeace released a report in 2006 based on Belarus national cancer statistics, that predicted approximately 270,000 cancers and 93,000 fatal cancer cases were caused by Chernobyl. The total Chernobyl-related death count for Belarus, Russia and Ukraine could eventually reach 200,000, it said.

The Red Forest is close to the Chernobyl nuclear reactor site. (Photo by Vitaliy Holovin/Corbis via Getty images)

The terrible environmental fallout of Chernobyl is still being felt. A wild boar with more than 10-times the safe limit of radiation, for example, was killed in 2017 by hunters hundreds of miles away in Sweden.

The site of the Chernobyl nuclear power plant, however, is getting a new lease on life thanks to the installation of solar panels.