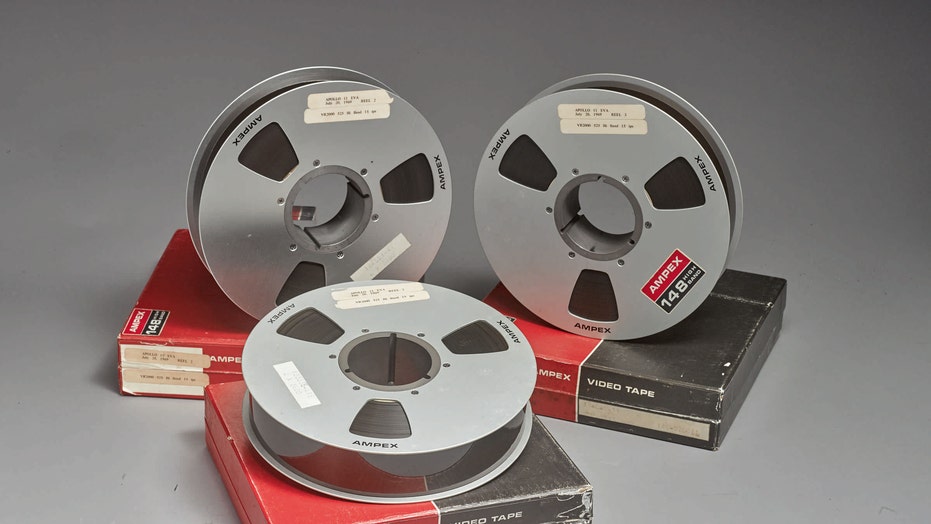 A set of original videotape recordings of the Apollo 11 Moon landing that were bought for $217.77 at a government surplus auction by a former NASA intern in the 1970s could raise up to $2 million when they are auctioned this month.

The unrestored, unenhanced and unremastered tapes are described as “the earliest, sharpest, and most accurate surviving video images of man’s first steps on the moon,” by auction house Sotheby’s.

The videotapes are headlining Sotheby’s Space Exploration auction in New York City on July 20, the 50th anniversary of the Moon landing.

Viewed only three times since they were bought directly from NASA at the auction in 1976, the tapes are the only surviving first-generation recordings of Neil Armstrong’s first steps on the Moon, according to Sotheby’s. In a statement, Sotheby’s explains that the tapes are “sharper and more distinct” than the few tapes that survive from network television broadcasts of the Moon landing.

One of the original videotapes of the Apollo 11 Moon landing. (Sotheby's)

The videotapes are from the collection of Gary George, who purchased them while serving an intern at NASA. In June 1976, George attended an auction at Houston’s Ellington Air Force Base where he bought a single lot of some 1,150 reels of magnetic tape whose “Owning Agency Or Reporting Office,” was listed as NASA.

“Among the reels were about sixty-five boxes of 2-inch, reel-to-reel videotapes of the type used by television stations,” explains Sotheby’s in a statement, noting that George planned to sell the used tapes, which could be re-recorded, to local TV stations.

EVA refers to Extra Vehicular Activity, the famous period of time that Armstrong and Buzz Aldrin spent on the lunar surface outside the Eagle lander. The EVA lasted just 2 hours, 31 minutes and 40 seconds.

“Thinking that these particular tapes may be worth hanging on to, George saved the three boxes, giving them little thought until early 2008 when he learned that NASA was attempting to locate its original slow scan videotapes of the Apollo 11 EVA (Extravehicular Activity) in anticipation of the 40th anniversary of the first manned moon landing,” explains Sotheby’s.

George sought out a studio with equipment capable of playing the tapes and in October 2008 they were played by DC Video, potentially for the first time since they had been recorded. Found to be in “faultless condition” they tapes were played again the following month and digitized. “This was the last time these reel-to-reel videotapes were played until Sotheby’s specialists viewed them in order to confirm their quality for this auction,” explains the auction house.

Buzz Aldrin, and Neil Armstrong reflected in his helmet, during the moon landing in 1969. (NASA)

The tapes, which have a run time of 2 hours and 24 minutes, have a pre-sale estimate of $1 million to $2 million.

The historic mission continues to be a source of fascination. A preliminary flight plan and a NASA memo discussing Neil Armstrong’s historic first words on the Moon are among a host of artifacts from the historic Apollo 11 mission that will be auctioned by Dallas-based Heritage Auctions from July 16 to 18.

A rare signed photo of Apollo 11 astronaut Armstrong making his ‘giant leap for mankind’ was recently sold in a separate auction for $52,247.

The unrestored, unenhanced and unremastered tapes are described as “the earliest, sharpest, and most accurate surviving video images of man’s first steps on the moon,” by auction house Sotheby’s.

Last year, a checklist that traveled to the surface of the Moon with Armstrong and Aldrin sold at auction in New York for $62,500.

In 2017, a bag containing Moondust filled by Armstrong was sold by Sotheby’s for $1.8 million.