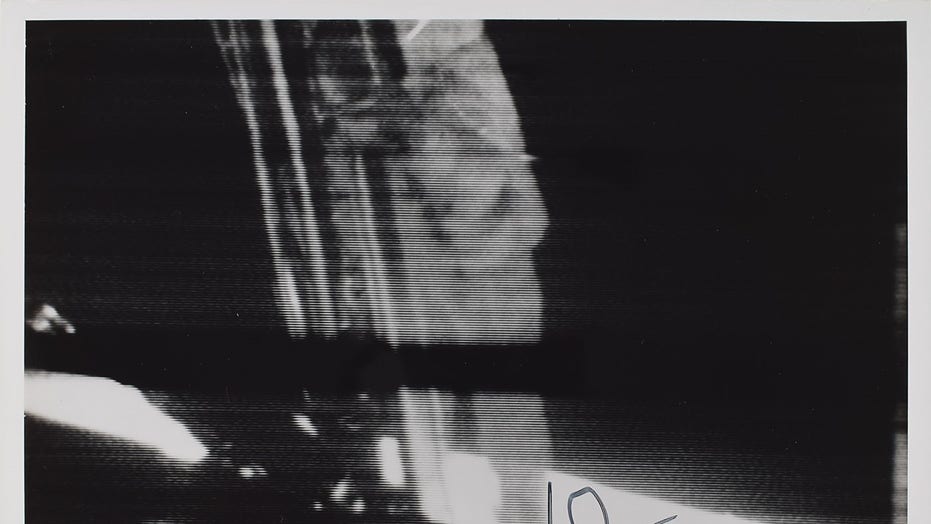 A rare signed photo of Apollo 11 astronaut Neil Armstrong making his ‘giant leap for mankind’ has been sold at auction for $52,247.

The 10x8 photo captures the moment just before Armstrong set foot on the lunar surface. It is signed “Neil Armstrong, Apollo 11.” The photo had a pre-sale estimate of $15,000.

The image had been in the possession of the family of Richard Windmiller Sr., the former head of NASA’s photo department, according to Boston-based RR Auction.

“Buzz didn’t get many pictures of Armstrong,” Livingston explained. “Buzz had things to do, they were there for such a limited time.”

Armstrong and Aldrin’s Extra Vehicular Activity, or the time they spent on the lunar surface outside the Eagle lander, lasted just 2 hours, 31 minutes and 40 seconds.

The image was part of the original video transmission of the historic event and was captured on a television camera mounted on the lunar module. NASA’s Jet Propulsion Lab in California worked to alter the transmission images to photo film.

Other items in the auction included a 70 mm positive film from Apollo 11’s Hasselblad camera, containing 126 of the most iconic images captured on the Moon’s surface, which was sold for $14,467. The film had a pre-sale estimate of $8,000.

An American flag that was flown into orbit during the Apollo 11 mission was also sold. The flag, signed and flight-certified by Command Module pilot Michael Collins, was auctioned for $20,803. The flag had a pre-sale estimate of $60,000.

Apollo artifacts continue to be a source of fascination. Last year, a checklist that traveled to the surface of the Moon with Armstrong and Aldrin sold at auction in New York for $62,500.

In 2017, a bag containing Moon dust filled by Armstrong was sold by Sotheby’s for $1.8 million.