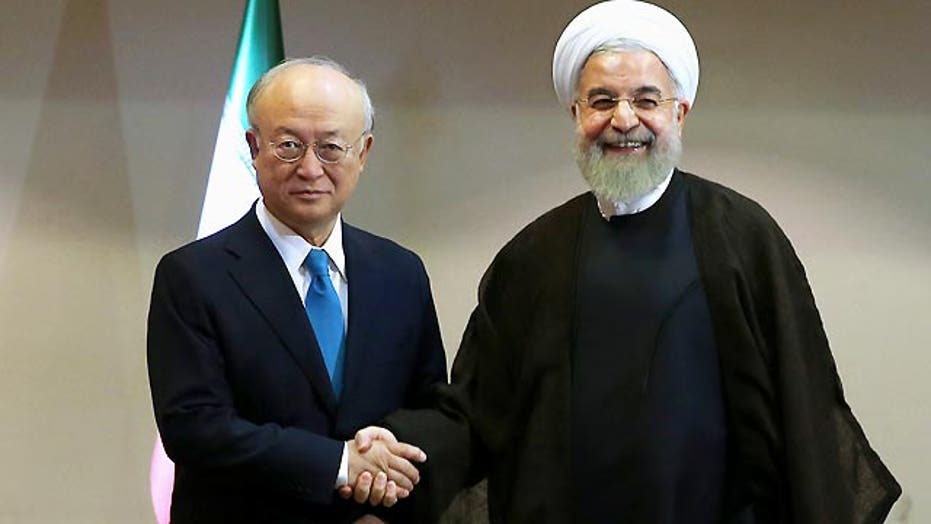 Did UN nuclear watchdog reach 'side deals' with Iran?

A closer look at the agreement with Iran

Secretary of State John Kerry found himself on the defensive Thursday at a Senate hearing where he was hard-pressed to find support for the Iran nuclear deal from either side of the aisle -- and sharply sparred with Republicans who accused him of being "fleeced" and "bamboozled."

The Senate Foreign Relations Committee hearing was the first on the controversial deal to lift economic and other sanctions in exchange for concessions of the Islamic state's nuclear program. With Congress taking up the deal and expected to vote on it sometime in September, the hearing underscored the deep resistance the Obama administration faces from both parties.

Critics repeatedly suggested the Obama administration's negotiating team gave in to pressure from the Iranians on key points. They question whether sanctions indeed can be reinstated once they're lifted; whether Iran might be able to stall international inspectors; and whether Iran might be closer to a weapon once the deal expires.

Sen. James Risch, R-Idaho, said: "You guys have been bamboozled."

Kerry, though, vigorously defended the agreement, calling it "fantasy, plain and simple," to think the United States failed to hold out for a better deal at the bargaining table.

"Let me underscore, the alternative to the deal we've reached isn't what I've seen some ads on TV suggesting disingenuously," he told the Senate Foreign Relations Committee. "It isn't a quote better deal, some sort of unicorn arrangement involving Iran's complete capitulation."

Energy Secretary Ernest Moniz also said the deal is not "built on trust."

Some lawmakers tried to play referee when the hearing got heated. Sen. Barbara Boxer, D-Calif., said the remarks from Corker and Risch were "disrespectful and insulting."

"If you were bamboozled, the world has been bamboozled -- that's ridiculous," Boxer told Kerry.

Kerry still had to contend with skeptical Democrats, notably Sen. Bob Menendez, D-N.J., who questioned whether the language in the deal is tough enough and like Corker said the deal aids Iran in building an "industrial-scale" nuclear program.

Kerry earlier warned that Iran will not come back to the negotiating table to pursue a new deal, voicing frustration that: "We've got 535 secretaries of state."

The hearing comes as lawmakers raise new concerns about alleged secret "side deals" struck with Tehran over its nuclear program.

Sen. Tom Cotton, R-Ark., and Rep. Mike Pompeo, R-Kan., first brought attention to them Tuesday, saying they learned from the International Atomic Energy Agency (IAEA) that there were two "side deals" between Iran and the IAEA.

According to the lawmakers, one agreement covers inspection of the Parchin military complex, and the other concerns potential military aspects of Iran's nuclear program. On the former, they said, Iran would be able to strike a separate arrangement with the IAEA concerning inspections at Parchin.

House Speaker John Boehner and Senate Majority Leader Mitch McConnell joined Cotton and Pompeo in sending a letter to President Obama on Wednesday requesting that the agreements be made available to Congress so that they can be reviewed.

"We request you transmit these two side agreements to Congress immediately so we may perform our duty to assess the many important questions related to the JCPOA [Joint Comprehensive Plan of Action]," the letter says.

National Security Adviser Susan Rice, while defending the overall nuclear agreement, appeared to acknowledge the existence of the side deals on Wednesday. She said the matter of the Iran nuclear program's "possible military dimensions" (PMD) has long been an issue between Iran and the IAEA. She said they "negotiated and concluded an agreement to deal with this issue of PMD, which was one of the major sticking points in our dealings."

She added: "These documents are not public, but nonetheless, we have been briefed on those documents, we know their contents, we're satisfied with them and we will share the contents of those briefings in full in a classified session with the Congress. So there's nothing in that regard that we know that they won't know."

Pompeo also asked Kerry about the secret deals in a briefing Wednesday and said afterwards that Kerry "confirmed that there were in fact side deals and himself had not seen the agreement."

"I was incredibly surprised to learn there were components of the deal that Congress was not going to be privy to," Pompeo said, adding that he had expected that American negotiators would have demanded to see the side deals being cut.

Kerry said after Thursday's hearing, though, "there are no side deals."

The letter to Obama expressed concern that Congress was being kept in the dark.

"Most troubling, Iran and the IAEA reached agreement to resolve issues related to research at Parchin, but Congress will not have the ability to review this agreement, nor will we know the results of the IAEA's assessment until December 15," the letter says.

It goes on to request access to the side deals so that Congress can effectively review the deal as a whole:

"Failure to produce these two side agreements leaves Congress blind on critical information regarding Iran's potential path to being a nuclear power and will have detrimental consequences for the ability of members to assess the JCPOA," the letter says.