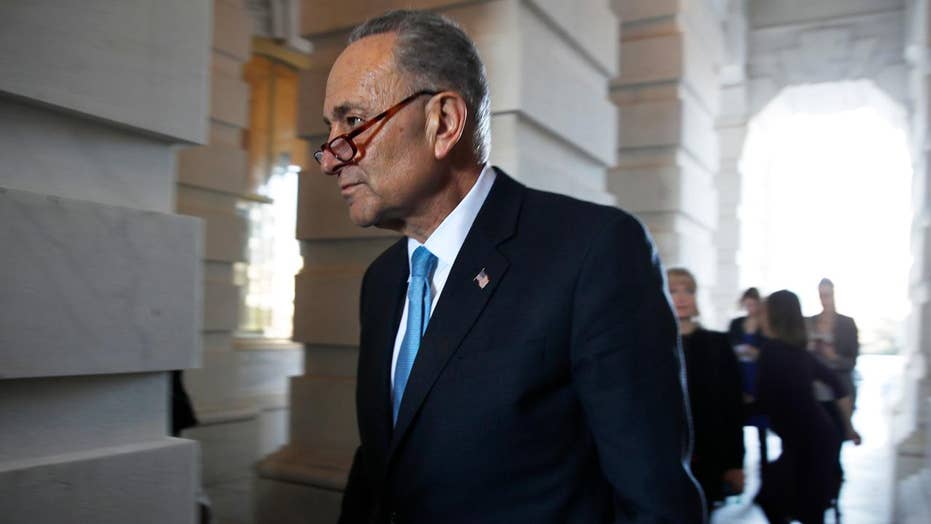 The temporal calendar may read January 26. But the fiscal almanacs in Washington practically read February 8.

What caused this ripple in the space-time continuum? The fact is that the government is funded only through February 8 and there’s no failsafe to avoid a second government shutdown.

On Monday night, after voting to end recent shutdown, lawmakers practically ran down a subway platform like an ebullient Philadelphia Eagles fan who just saw his team punch a ticket to the Super Bowl. If they don’t do something soon, lawmakers could abruptly crash blindly into a subway pillar just like the Eagles partisan.

The House hadn’t even voted yet to re-open the government late Monday when House Minority Whip Steny Hoyer, D-Md., warned colleagues of what lurked around the corner.

“We have 10-and-one-half days before we have another crisis in funding our government,” he said on the House floor.

Hoyer was referred to what lawmakers consider “legislative days” where Congress meets to conduct business. But it doesn’t matter how you measure it. Calendar days. Legislative days. Heating degree days in meteorology. There’s not much track between now and when government funding runs dry again.

“We need to learn the lessons of what happened here,” House Speaker Rep. Paul Ryan, R-Wis., said during a short debate about the interim spending bill on the floor.

The House voted moments later to flip on the federal lights again. Members then dashed for the exits, not to return to Washington until this coming Monday night.

Ryan flew to Spain and the Middle East with a bipartisan delegation of lawmakers. McCarthy and others jetted off to the World Economic Forum in Davos, Switzerland.

The Senate hung around a few more days this week, then buzzed out of town around 2 p.m. Thursday. The House and Senate will meet Monday and Tuesday next week and hear President Trump’s State of the Union address.

Then Republicans will board buses at the crack of dawn Wednesday for their legislative issues retreat in rural West Virginia. Everyone returns to work the week after that -- just before government funding expires again.

This is the type of scenario that prompted a series of shutdowns in the fall and winter of 1995 and 1996. It was an epic standoff between President Clinton and then-House Speaker Newt Gingrich, R-Ga.

The sides tussled over health care reimbursements as well as education and environmental spending. They thought they were close to a pact after the initial shutdown.

In fact, Clinton and Gingrich had a more concrete accord to find a solution by the time funding ran out the second time than the nod that re-opened the government this week.

One of the biggest disputes in the Clinton-Gingrich imbroglio was if they should use budget numbers from the administration’s Office of Management and Budget or the legislature’s Congressional Budget Office.

Congressional Republicans adored the CBO back then. Not so much today. Consider how GOPers regularly malign the office over health care projections.

But that’s another story.

When the shutdowns hit nearly 23 years ago, the National Zoo was closed but Congress was in session. During the 2018 weekend shutdown, the zoo and Congress were both open -- although some may struggle to observe the distinction.

So how do the sides fund the government and forge a border security/DACA package in such a short period?

“We’re going to be in an interesting week ahead,” mused Sen. Chris Coons, D-Del., part of the 22-member, bipartisan Senate working group searching for consensus on immigration and DACA, the Obama-era executive order that protects immigrants brought to the United States illegally as children and that President Trump is ending.

“It’s outgrowing my office,” said Sen. Susan Collins, R-Maine, who hosts the convocations in a suite of rooms in the Dirksen Senate Office Building.

But the sides are torn as to what to expect from Trump to help break the impasse.

“If the president wants to be constructive, stay out of it and let the Senate be the Senate,” Coons suggested. “The less he tweets and jerks the wheel of the bus back and forth, then we have a chance.”

But one of the biggest problems for lawmakers is understanding what policy Trump could support.

“What (the president) says today is what he says today,” sighed one senior GOP congressional aide about Trump’s mutating positions. “What he says tomorrow is something else.”

“I can’t commit to anything until you tell me you have the support in the president,” said McCaskill of her request of Nielsen. McCaskill says Nielsen replied “‘I understand what you’re saying.”

On Thursday, key White House staff briefed congressional aides on the specifics of an immigration/DACA border security plan. Close to 700,000 persons have signed up for DACA, formally known as Deferred Action for Childhood Arrivals, and could apply for legal status.

However, the administration has grown the pool of those who could have a pathway to citizenship to 1.8 million people. That includes those who are DACA eligible.

In addition, the administration laid out a requirement for Congress to create a $25 billion trust fund to construct a border wall system.

Some wanted Trump to stay away. Some wanted specificity. But the details received a mixed message from stakeholders.

Democratic Illinois Rep. Luis Gutierrez declared: “It would be far cheaper to erect a 50-foot concrete statue of a middle finger and point it towards Latin America.”

“Amnesty comes in many forms,” said Heritage Action’s Michael Needham. “If any amnesty negotiations are to take place, they should remain extremely limited in scope so as not to encourage further illegal immigration.”

But Schumer rescinded his proposal. At the Capitol late Sunday, White House Director of Legislative Affairs Marc Short complained that Schumer and Democrats would only commit to a one-year appropriation of money for the border wall. The president couldn’t agree to that.

There are a few programs that deal with multi-year outlays. Federal heating assistance follows a complicated formula that stretches beyond a year. The farm bill is a multi-year exercise. Same for the highway bill. Note that a trust fund -- similar to what the administration is seeking for the wall -- is what drives federal highway programs.

Otherwise, Trump must rely on the good graces of Congress to provide wall funding.

“Fine. Then approve all of the money in one year,” Short said.

One source intimately familiar with the congressional appropriations process mused that lawmakers “would be hesitant to do that.”

Short argues that multi-year funding for the wall is essential for national security. But Congress didn’t approve advance funding to beef up national security after 9/11 for more than a year. Lawmakers didn’t fund the wars in Afghanistan and Iraq ahead of time. So why does the wall rise above all of those other national security initiatives and deserve different treatment?

Senate Majority Whip John Cornyn, R-Texas, noted that Republicans were simply not going to do a permanent DACA fix in exchange for one year of wall funding. Cornyn fretted that Democrats may not fund the wall if they flip either the House, Senate or both in this year’s midterm elections.

“Any future promise (of wall money) is illusory at best,” he said.

And so the government is open now. But for how long? Something must give. Or will it?

This is why it’s so late so soon.