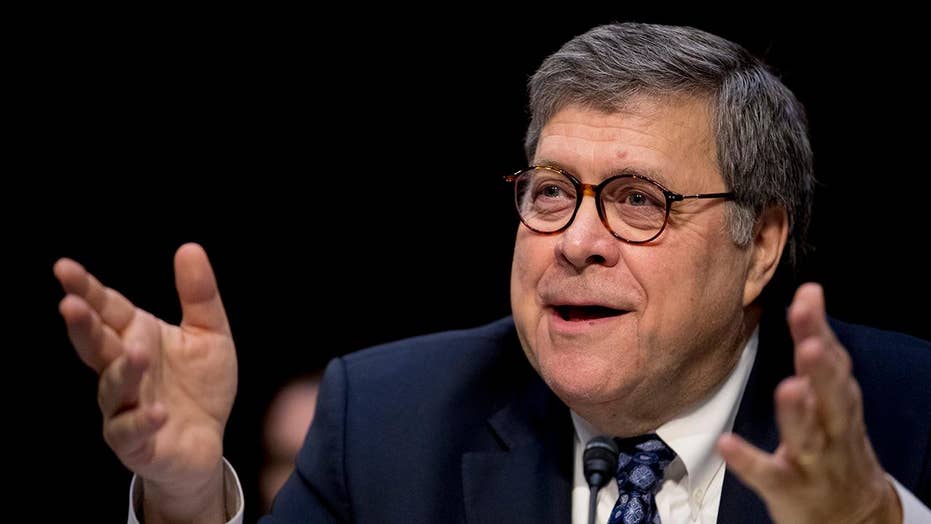 President Trump’s nominee for attorney general William Barr told senators during his confirmation hearing on Tuesday that he supports the president’s call for new barriers along the U.S.-Mexico border, while departing from the president’s public stances on the Russia probe.

The hearing ended Tuesday evening with few fireworks, and Barr appeared likely to sail to confirmation in the Republican-controlled Senate. Even so, some Democrats sounded the alarm, with Connecticut Democratic Sen. Richard Blumenthal charging that Barr had indicated he would exploit legal "loopholes" to hide Special Counsel Robert Mueller's final report from the public and to resist subpoenas against the White House.

"I will commit to providing as much information as I can, consistent with the regulations," Barr had told Blumenthal, when asked if he would ensure that Mueller's full report was publicly released.

South Carolina Republican Sen. Lindsey Graham, who chairs the Judiciary Committee, said afterwards that he was satisfied that Barr was the "right man for the job." He added that Democrats had asked appropriate questions -- in stark contrast to what he called the "sham" that occured during the confirmation hearings of now-Associate Justice Brett Kavanaugh.

"I voted for Eric Holder and Loretta Lynch — not because I agreed with their political philosophy or policy positions — but because I thought they were qualified," Graham said in a statement Tuesday evening, referring to the two Obama-appointed attorneys general. "I’m asking no more of Democrats than I asked of myself.  I am hopeful Democrats will support this fine man."

Barr faced an array of questions on topics ranging from criminal justice to immigration. Asked about the ongoing partial federal government shutdown, Barr said, "I would like to see a deal reached whereby Congress recognizes that it's imperative to have border security, and part of border security, as a common sense matter, involves barriers.”

Barr said a “barrier system across the border” is needed for stopping illegal immigration and the “influx of drugs."

Attorney General nominee William Barr thanks his grandson Liam Daly, right, for a mint as he returns from a break in testimony at a Senate Judiciary Committee hearing on Capitol Hill in Washington, Tuesday, Jan. 15, 2019. As he did almost 30 years ago, Barr is appearing before the Senate Judiciary Committee to make the case he's qualified to serve as attorney general. (AP Photo/Andrew Harnik)

But Barr – who pledged during Tuesday’s confirmation hearing to not interfere with Mueller's Russia investigation – also asserted his independence from Trump on statements related to the probe.

Under questioning, Barr said he doesn’t believe “Mueller would be involved in a witch hunt” – something the president has repeatedly argued. Barr said he has known Mueller “personally and professionally for 30 years,” having worked together at the Justice Department.

“That’s why I said… I don’t subscribe to this ‘lock her up’ stuff,” Barr said at one point, referring to a common chant at Trump's campaign rallies that refers usually to Hillary Clinton.

He also said former Attorney General Jeff Sessions was right to recuse himself from the Russia investigation because of his role in the 2016 campaign, something that infuriated the president and helped lead to Sessions' removal last year.

Barr also unequivocally said he believes Russia attempted to interfere with the election and said he supports an investigation "to get to bottom of it."

“I will follow the Special Counsel regulations scrupulously and in good faith, and on my watch, Bob will be allowed to complete his work,” Barr told the Senate Judiciary Committee.

But Barr also staked out positions that will be welcomed by Trump, including his commitment to look into anti-Trump bias at the FBI during the 2016 campaign. The nominee said he was “shocked” by the anti-Trump texts that were famously sent between FBI employees Peter Strzok and Lisa Page.

The White House expressed its support for Barr in a statement Tuesday, with press secretary Sarah Sanders telling Fox News, "He is a very honorable man, doing what he believes – and the president respects that. The president thinks he will be a great Attorney General.”

Graham kicked off Tuesday’s confirmation hearing for Barr by saying the Justice Department needs a new leader to “right the ship over there.”

“We’ve got a lot of problems at the Department of Justice,” Graham said. “Morale is low and we need to change that. I look forward to this hearing. You will be challenged. You should be challenged.”

Barr, 68, was nominated by the president to lead the Justice Department in December, after Sessions resigned at Trump’s request in November.

Barr previously served as attorney general from 1991 to 1993, and his confirmation hearings nearly 30 years ago went off largely without incident.

Judge Andrew Napolitano and the 'Outnumbered' panel react to William Barr's answers and demeanor at his Senate confirmation hearing.

During the hearing, Barr's past comments about the Mueller investigation attracted scrutiny, including an unsolicited memo he sent the Justice Department last year criticizing the special counsel's inquiry into whether Trump had sought to obstruct justice. Barr, as head of the Justice Department, would take over from acting attorney general Matthew Whitaker and oversee Mueller's work.

“The memo, there will be a lot of talk about it, as there should be,” Graham said.

“Importantly, the attorney general must be willing to resist political pressure and be committed to protecting this investigation,” Feinstein said.

Barr sought to explain the memo, telling lawmakers he distributed it so “other lawyers would have the benefit of my views.”

“The memo did not address – or in any way question – the special counsel’s core investigation into Russian interference in the 2016 election,” Barr said. “Nor did it address other potential obstruction-of-justice theories or argue, as some have erroneously suggested, that a president can never obstruct justice.”

Attorney General nominee William Barr, right, testifies during a Senate Judiciary Committee hearing on Capitol Hill in Washington, Tuesday, Jan. 15, 2019. Barr will face questions from the Senate Judiciary Committee on Tuesday about his relationship with Trump, his views on executive powers and whether he can fairly oversee the special counsel's Russia investigation. Barr served as attorney general under George H.W. Bush. (AP Photo/Andrew Harnik)

Democrats on the committee asked questions about his past relationship with the president. Barr acknowledged meeting Trump once in 2017, saying he made clear his disinterest at the time in joining Trump’s legal private legal team because “I didn’t want to stick my head into that meat grinder."

Asked by Illinois Sen. Dick Durbin about the hypothetical of being pressured into doing something he disagreed with, Barr replied, “I will not be bullied into doing anything that is wrong by anybody, whether it be editorial boards, Congress or the president. I’m going to do what I think is right.”

Barr was introduced Tuesday by former Utah Sen. Orrin Hatch, a former longtime member of the committee who retired and was replaced by Sen. Mitt Romney this year.

It’s the first major Judiciary Committee hearing since the dramatic testimony last year during the confirmation of Supreme Court Justice Brett Kavanaugh. Several Democratic senators thought to be potential presidential contenders in 2020 -- including Kamala Harris, Cory Booker, and Amy Klobuchar -- are among those questioning Barr.

To be confirmed, Barr will need to garner a simple majority of votes in the Senate. Republicans currently hold 53 of the Senate's 100 seats.

Fox News’ John Roberts, Gregg Re and The Associated Press contributed to this report.