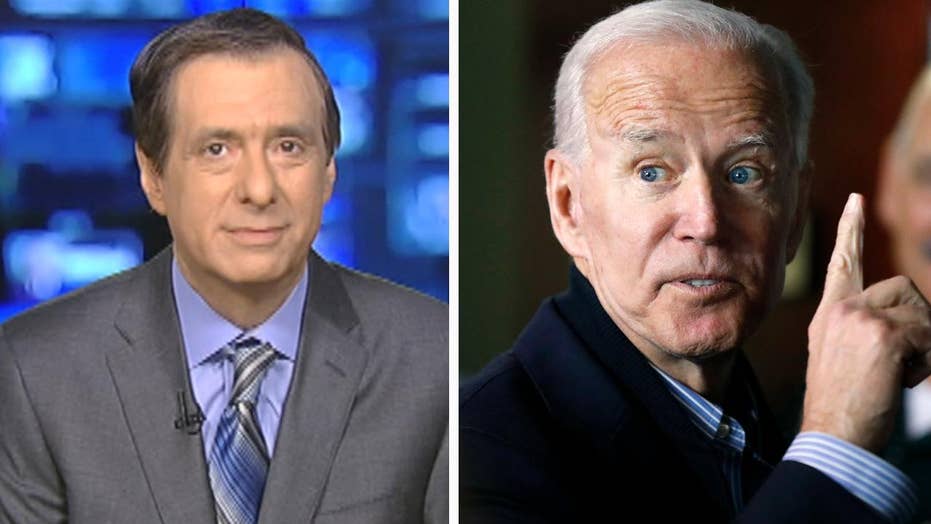 'MediaBuzz' host Howard Kurtz weighs in on President Trump's attacks against Joe Biden and how the increased attention could potentially help the Democratic presidential candidate.

There may be 22 Democratic candidates, but the Republican candidate — and therefore the media — are increasingly focused on just one.

At times we seem to have a two-man race pitting Donald Trump against Joe Biden, even though it's ridiculously early and the Dem debates don't even begin until next month.

The president's constant focus essentially allows Biden to act as if he's already in a general election matchup, depriving the other candidates of crucial oxygen. And with Biden already dominating the polls and having the Obama connection, the White House attacks make him sound like a done deal.

There are two possible reasons for Trump’s approach:

— He's embarked on a calculated strategy of trying to scuff up Biden early on, painting an indelible image that will either produce a wounded nominee or knock him out of the primaries.

— He just can't help himself.

But the net effect is the same: building up Biden, paradoxically, by trying to take him down.

One thing is clear: many of the president’s aides aren't happy about what he’s doing. This plunges us back into familiar territory, where Trump confidantes, unable to persuade him, send him messages through the media. The practice is known more formally as leaking.

For Trump's advisers, says The New York Times, such tweets as "China is DREAMING that Sleepy Joe Biden ... gets elected" was "one more example of the president's inability to resist offering what amounts to an in-kind contribution to a Democrat who, according to their own polling, is positioned to soundly defeat them next year."

Trump's constant swipes at Biden "have defied the pleadings of his own aides, who think almost any other candidate would be easier to defeat, and left Republicans puzzled while delighting Biden supporters," the paper says.

Some Republicans "would prefer a more easily caricatured boogeyman on top of the Democratic ticket next year," with one quoted as saying that Bernie Sanders would be perfect because "he looks like the professor out of 'Back to the Future' and is a hard-core socialist." Ouch.

According to this view, Trump is inadvertently aiding the man that GOP pollster Tony Fabrizio found would easily beat the president.

But while some Republicans say Trump is just watching cable news and strafing Biden based on the coverage, others believe he can badly damage the longtime senator as a creature of the discredited establishment. Trump's gift for mockery, which served him well against his 16 Republican opponents, could take a toll on Biden, especially if he's baited into intemperate responses.

Is Joe Biden is too moderate?

Biden has been fairly restrained in his rejoinders, but he's also prone to say things like "things will fundamentally change" with "Donald Trump out of the White House. Not a joke. You will see an epiphany occur among many of my Republican friends ...This nation cannot function without generating consensus. It can't do it."

Democrats who are in a fighting mood think Biden is deluding himself about cooperation from his "Republican friends." From this vantage point, they want a revolution and he's offering a  restoration.

One final note is whether the president projects as far more energetic than the man he's trying to brand as sleepy.

Taking a moment to praise the president he usually bashes five mornings a week, MSNBC's Joe Scarborough says Trump has more "vigor" than some of his Democratic opponents:

"That guy can do on a campaign stage what nobody else can do: He can engage the audience. He can engage viewers, despite the hateful rhetoric ... He does look like he is about 20 years younger than a lot of Democratic candidates."

Trump is 72 and Biden is 76, but Morning Joe has a point. He didn't say it, but the other Joe looks a step slower than he did as vice president. Biden can dispel that by running a fast-paced, high-energy campaign in the face of all those Trump jibes.

The kicker is that the president, who had a bitter falling-out with his former friends Joe and Mika and recently slammed the ex-congressman as Psycho Joe, actually thanked him on Twitter. What's more, the president said, "the BRAIN is much sharper also!"