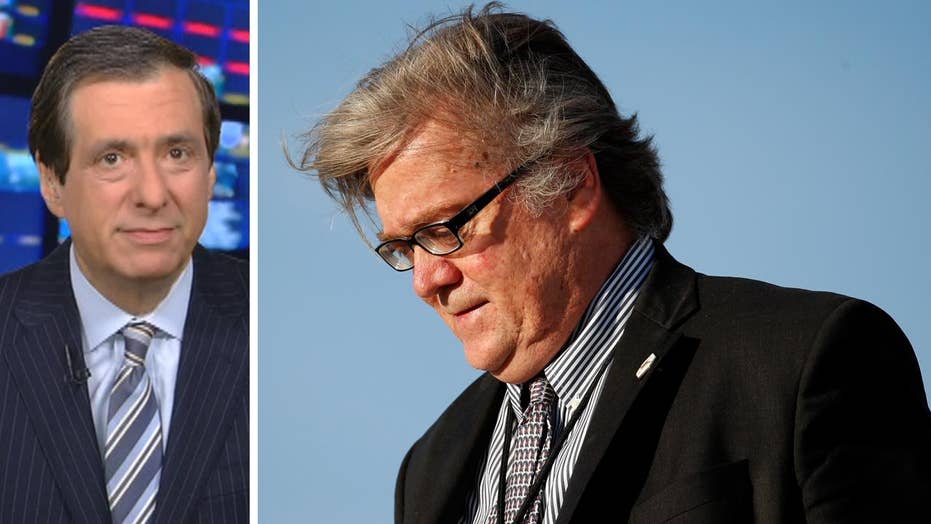 Kurtz: Bannon's war with the media

Steve Bannon left the White House amid a cloud of misconceptions.

It’s been fascinating to watch some pundits say his departure will tilt the administration toward a more moderate path—charted by those Bannon dismissed as “globalists”—while others say not much will change since there’s not a dime’s worth of difference between Bannon and Donald Trump.

In other words, he was the embodiment of everything Trump’s critics dislike about his White House—up until the moment he left, when he was somehow irrelevant.

That, at least, is debatable. Some other media chatter about Bannon—with notable exceptions by sophisticated reporters—is not. Based on my White House reporting:

Bannon wasn’t fired because of his interview with the liberal American Prospect. He did say all kinds of provocative things: calling white supremacists “clowns,” dissing some of his colleagues, challenging Trump’s policy on North Korea. But it’s true that he had offered his resignation back on August 7.

Bannon did not believe his interview with the Prospect’s Robert Kuttner was off the record. This wasn’t some kind of Scaramucci deal. It was more like a series of parting shots.

Bannon wasn’t done in by Charlottesville. The only impact of the violence there was to delay the announcement of a resignation that was already a done deal.

It’s true that Bannon was consulting with Trump on the weekend of the white supremacists’ rally that left a 32-year-old woman dead, and that he was pleased with the president’s handling of the controversy. But that brings me to a key point.

Steve Bannon was a force for conservative populism in the White House, but he didn’t manipulate Donald Trump in the way that some of his critics imagine. His influence was strongest on the issues that Trump has been espousing for decades: trade, immigration and a nationalist economic policy. Bannon had less success pushing against military saber-rattling against Pyongyang, for instance, or raising tax rates on the rich.

His feuds with other White House officials hurt him, and when John Kelly came in as chief of staff, it was pretty clear the retired general was not going to tolerate these freelance incursions by the former Navy officer.

In immediately rejoining Breitbart as executive chairman, Bannon made clear that he will continue to fight for his agenda on the outside. Some pundits construed that as attacking Trump, which is not the case. But Bannon could complicate Trump’s presidency by going after his old adversaries, which includes the GOP establishment on the Hill as well as the mainstream media.

Breitbart’s London editor, Raheem Kassam, told me yesterday on “Media Buzz” that under Bannon’s leadership the conservative website will continue to be used as a “weapon.” He said other media outlets are weaponized but just don’t admit their leanings. What’s undoubtedly true is that Bannon’s return will give Breitbart a significant weapons upgrade.