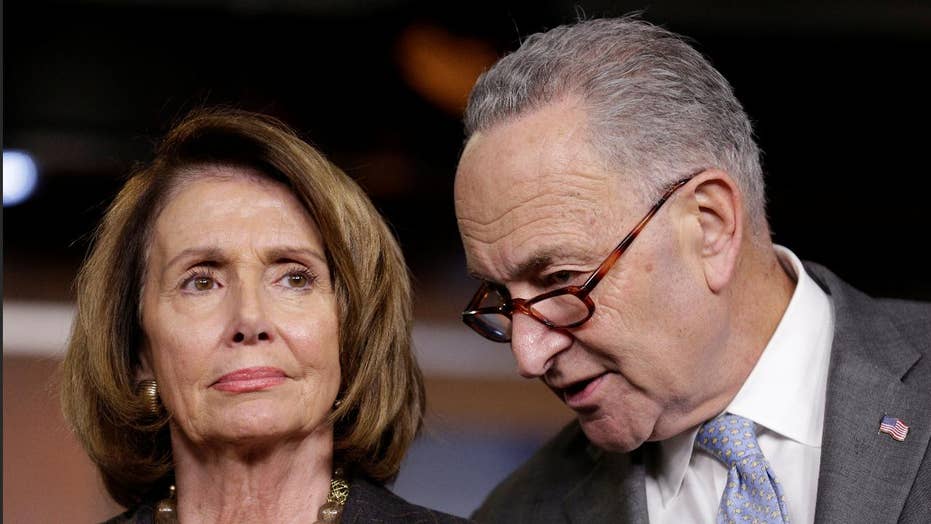 Schumer, Pelosi abruptly withdraw from meeting after President Trump took to Twitter to claim 'Chuck and Nancy' are for illegal immigration, weak on crime and want to raise taxes.

The White House on Tuesday shot back at the top congressional Democrats -- Sen. Chuck Schumer and Rep. Nancy Pelosi -- for pulling out of a White House meeting with President Trump, saying the president wants them to “put aside their pettiness” and “get to work.”

Schumer, the Senate minority leader, and Pelosi, the House minority leader, cancelled their meeting with Trump and top congressional Republicans after the president hinted that any attempt to reach a bipartisan deal to avoid a government shutdown would be thwarted by Democrats’ desire to include immigration reform and tax increases.

“It’s disappointing that Senator Schumer and Leader Pelosi are refusing to come to the table and discuss urgent issues,” said White House Press Secretary Sarah Sanders. “The president’s invitation to the Democrat leaders still stands and he encourages them to put aside their pettiness, stop the political grandstanding, show up and get to work. These issues are too important.”

The White House response followed a joint statement from Schumer and Pelosi after Trump’s tweet, in which they said they’d rather negotiate alone with Senate Majority Leader Mitch McConnell and House Speaker Paul Ryan.

“Given that the president doesn’t see a deal between Democrats and the White House, we believe the best path forward is to continue negotiating with our Republican counterparts in Congress instead,” Schumer, of New York, and Pelosi, of California, said in the statement.

Minutes later, Schumer suggested on the Senate floor that Trump had decided before the meeting that no bipartisan deal could be reached.

“If the president, who already earlier this year said ‘Our county needs a good shutdown’ … isn’t interested in addressing the end-of-the-year agenda, we’ll work with those who are interested in funding the government,” he also said.

McConnell, of Kentucky, and Ryan, of Wisconsin, said in a joint statement that they would still attend the meeting.

"We have important work to do, and Democratic leaders have continually found new excuses not to meet with the administration to discuss these issues,” they said in the statement. “There is a meeting at the White House this afternoon, and if Democrats want to reach an agreement, they will be there."

McConnell also tweeted: "I look forward to discussing with @POTUS this afternoon our shared goals as we continue collaborating to pass legislation, including #TaxReform, and send it to his desk for signature.”

Congress has until Dec. 8 to pass stopgap legislation to keep the government open, and Tuesday's protest from Pelosi and Schumer points to new problems ahead.

“Meeting with 'Chuck and Nancy' today about keeping government open and working. Problem is they want illegal immigrants flooding into our Country unchecked, are weak on Crime and want to substantially RAISE Taxes. I don’t see a deal!” Trump said in the tweet that started the standoff.

Schumer and Pelosi also said in the statement: “Rather than going to the White House for a show meeting that won’t result in an agreement, we’ve asked Leader McConnell and Speaker Ryan to meet this afternoon."

Trump hasn't engaged much with Pelosi and Schumer since a September meeting that produced an agreement on a short-term increase in the government's so-called debt limit and a temporary spending bill that is now keeping the government running.

Trump reveled in the bipartisan deal for a time and generated excitement among Democrats when he told then he would sign legislation to protect from deportation immigrants who were brought to the country illegally as children.

Trump in September reversed an executive order by former President Barack Obama that gave protections to the so-called Dreamers, many of whom have little or no connection to their home country.

Shortly afterward, he told Pelosi and Schumer he would sign legislation protecting those immigrants, provided Democrats made concessions of their own on border security.

"Hopefully, we can make progress on an agreement that covers those time-sensitive issues and keeps the government running and working for the American people," Schumer said before Trump’s tweet.

His and Pelosi’s statement also said: “We look forward to continuing to work in good faith, as we have been for the last month, with our Republican colleagues in Congress to do just that.”