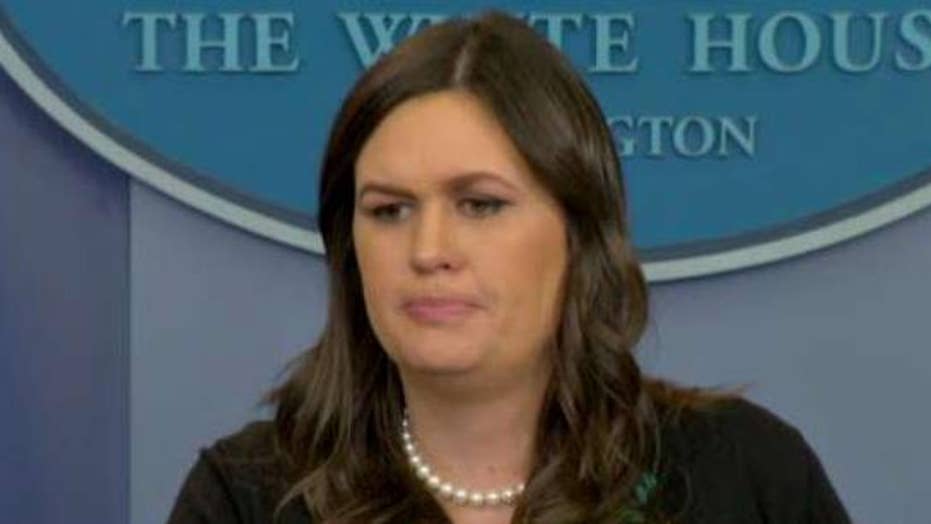 White House press secretary says that while details of the Trump's meeting with Kim Jong Un are still being worked out, the president won't meet North Korea's leader without 'concrete action.'

The White House said Friday that the highly anticipated meeting between President Trump and North Korean dictator Kim Jong Un will not happen without “concrete actions” from the rogue regime.

Kim Jong Un extended an invitation to meet with Trump through South Korean National Security Adviser Chung Eui-yong, who made the announcement at the White House Thursday evening. The president agreed that the two would meet by May, 2018 –but that won’t happen until “actions match words.”

“What we know is that the maximum pressure campaign has clearly been effective, and they have made some major promises to denuclearize,” White House Press Secretary Sarah Sanders said during a press briefing at the White House Friday. “We’re not going to have this meeting take place until we see concrete actions.”

"We're not going to have this meeting take place until we see concrete actions,"

Sanders added: “We’ve accepted the invitation to talk based on them following through on concrete actions based on the promises that they’ve made.”

Sanders told reporters that the U.S. has made “zero concessions” to North Korea throughout the process, and said this “didn’t happen overnight.”

“This pressure campaign has been ongoing since the president took office,” Sanders said, noting that the U.S. would be having the conversation from “a position of strength, not weakness” like North Korea.

No official time or location has been set for the meeting, but Sanders said the ultimate goal is to denuclearize the peninsula.

“I can tell you the president has accepted the invitation on the basis we have concrete and verifiable steps,” Sanders said.

“President Trump has said for some time that he was open to talks and he would willingly meet with Kim when conditions were right,” Secretary of State Rex Tillerson said during a visit to the African nation Djibouti Thursday. “And I think in the president’s judgement that time has arrived now.”

The news that Trump had accepted the meeting was greeted with positive reactions from officials in China, Russia and South Korea – three crucial players in efforts to resolve the ongoing dispute over North Korea’s nuclear ambitions.

Kim "expressed his eagerness to meet President Trump as soon as possible," Chung said Thursday at the White House. "President Trump appreciated the briefing and said he would meet Kim Jong Un by May to achieve permanent denuclearization."

Kim, according to Chung, understands that joint military exercises between South Korea and the U.S. would continue. The North Korean leader, according to recent talks with Chung, also claimed to be "committed to denuclearization."

"He (Kim) pledged that North Korea will refrain from any further nuclear missile tests," Chung said, adding that Trump's "leadership" and "maximum pressure" brought us "to this juncture."

Chung said that "along with President Trump," he is "optimistic of continuing a diplomatic process." But he added that "the pressure will continue until North Korea matches its words with concrete actions."

Trump and Kim have had a contentious relationship during the last year as both men dramatically increased the rhetoric against the other amid the backdrop of increased nuclear and missile testing by the North Korean regime.

In August Trump warned Kim that, if pressed, the U.S. would unleash "fire, fury and frankly power, the likes of which this world has never seen before." At the time, the president argued that Kim had "been very threatening beyond a normal state," adding that the regime "best not make any more threats to the United States."