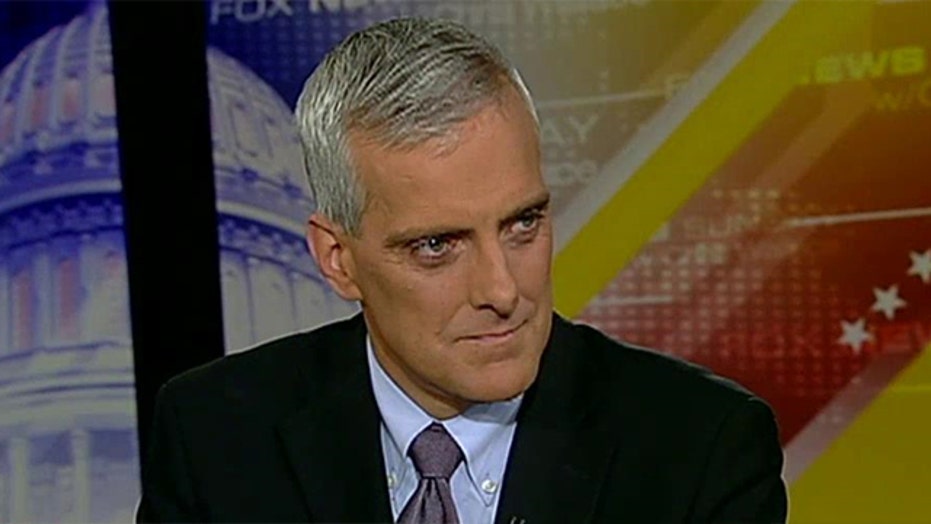 The White House on Sunday put pressure on Congress to vote this week in favor of training and arming Syrian rebels as part of President Obama’s plan to destroy the Islamic State, making clear that sending U.S. combat troops is not an option.

“If it’s not the Syrian opposition, trained and equipped by the United States, authorized by Congress and the president … then it’ll have to be U.S. troops,” White House Chief of Staff Denis McDonough told “Fox News Sunday.” “The president made a decision on that. We’re not going to do that.”

The GOP-led House appears most ready to approve the plan. Members are expected to return to Capitol Hill on Monday, a day ahead of schedule, to begin preliminary work on authorizing the training and the $500 million in spending the White House wants for moderate Syrian rebels to help in the fight against the militant group, also known as ISIS or ISIL.

House Speaker John Boehner on Thursday expressed skepticism about Obama’s plan to defeat the Islamic State, which is limited to U.S. air strikes, but nevertheless backed the commander in chief.

“An F-16 in not a strategy,” the Ohio Republican said. “The president has made clear that he doesn’t want U.S. boots on the ground. So somebody’s boots have to be on the ground. … We ought to give the president what he’s asking for.”

The authorization is expected to be attached to a so-called continuing resolution, a spending bill that will keep the federal government running through December and which Congress will almost assuredly approve before breaking to campaign before the November elections.

House Majority Leader Kevin McCarthy advised members Thursday to be prepared as early as Tuesday to consider the continuing resolution or the Islamic State reauthorization.

“This is a threat, and the House will act as one as Americans,” he said on the House floor.

Maryland Rep. Steny Hoyer, the No 2 House Democrat, told Roll Call last week that Congress could hold a second vote, after the elections, on a “larger authorization for the use of military force.”

Senate Majority Leader Harry Reid called for vote on the issue before Obama’s prime-time TV address Wednesday in which he told Americans he will increase targeted air strikes against the Islamic State in Iraq and that he OK’d similar strikes in Syria, as part of a broader, coalition effort with allies.

"It's clear to me that we need to train and equip Syrian rebels and other groups in the Middle East that need some help," the Nevada Democrat said Wednesday, after meeting with Obama and other Capitol Hill leaders a day earlier. "The president has tried to get that from us and we should give it to him."

However, such a vote in the Democrat-controlled chamber has yet to be scheduled.

An authorization plan also appears to have the backing of California Rep. Nancy Pelosi, the top House Democrat, who also attended the meeting.

However, other congressional Democrats seem reluctant to support any plan that might appear to give the president broad powers that might lead the U.S. toward another war in the Middle East.

“Congress must weigh in when it comes to confronting ISIL through military action,” Arizona Democratic Rep. Raúl Grijalva and other leader of the congressional Progress Caucus said after the president’s speech.