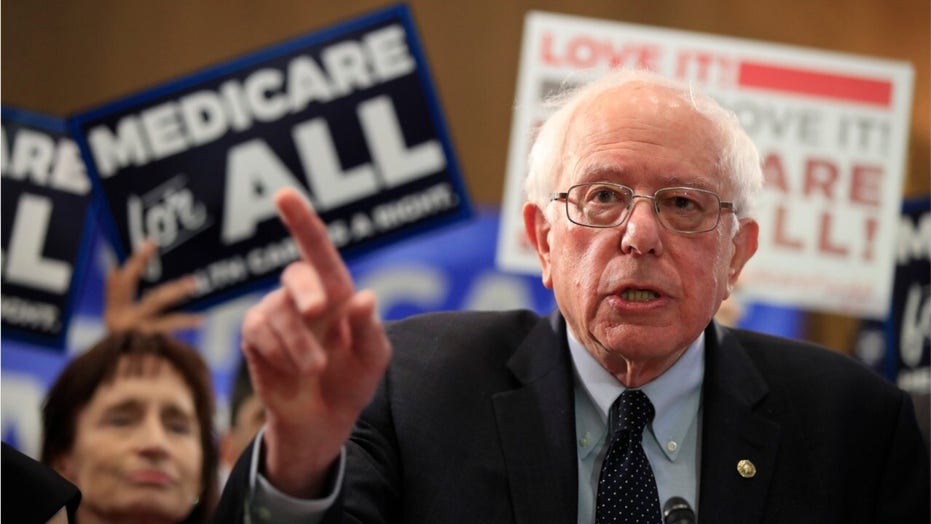 What is Bernie Sanders’ stance on health care?

As an increasing number of American voters are viewing health care as the most important issue facing the country, many are rallying around Bernie Sanders’ idea of a “Medicare-for-All” program. Here is what you should know about the democratic presidential candidate’s proposed plan.

Democratic presidential candidate and Vermont Sen. Bernie Sanders has made health care the signature issue of his campaign — and with good reason.

A Fox News Voter Analysis on the Michigan Democratic presidential primary showed that 41 percent of voters saw health care as the most important issue facing the U.S., with the economy and climate change coming in a distant tie for second at 18 percent. That breakdown has been similar in many other states on the Democratic primary calendar.

Here's where Sanders stands on health care as he tries to turn Americans' concern about the issue into votes at the polls.

Sanders with Fox News anchors Bret Baier and Martha McCallum at a town hall in Detroit ahead of Tuesday's Democratic primary voting there and in five other states this week.

Sanders is the author of the original "Medicare-for-All" bill in the Senate and is fond of reminding people of that fact. He "wrote the damn bill," as he has said on the Democratic presidential debate stage. And Sanders' bill has moved the goalposts on the health care issue, forcing every major Democratic presidential candidate who joined the 2020 race to embrace government-backed health care to a certain degree.

Many candidates supported what's known as a public option -- a government-backed health insurance plan designed to compete with private insurance, driving down prices and giving guaranteed coverage to individuals who cannot afford private insurance or can't get accepted to a plan. Before he dropped out of the presidential race, former South Bend, Ind., Mayor Pete Buttigieg called his plan "Medicare-for-All-Who-Want-It."

Former President Obama tried to include a public option in the Affordable Care Act, which is also known as Obamacare, but couldn't secure enough votes in Congress to include it in the bill.

But Sanders would go further, eliminating the private health insurance market and putting all Americans on a single, government-run plan. That is what sets the "Medicare-for-All" plan Sanders advocates for apart from other options for reforming the U.S. health care system.

Even Massachusetts Sen. Elizabeth Warren, who eventually wants to move to a full, single-payer health care system, said before she dropped out of the presidential race that she wants to move incrementally when it comes to eliminating private health insurance.

One of the top benefits of his approach, Sanders says, would be to ensure Americans are no longer paying out of pocket for their health care. His campaign website says "Medicare-for-All" would be "free at the point of service" and would have no "networks, no premiums, no deductibles, no co-pays" and "no surprise bills."

Another advantage to a "Medicare-for-All" plan, Sanders says, would be that there would be a single insurance provider –  the government – negotiating prices with drug companies and hospitals. This would supposedly increase the bargaining power held by the government, which already has managed to negotiate favorable prices for seniors currently on Medicare, and result in a net savings for the average American, even though their taxes would increase to pay for the plan.

The Committee for a Responsible Federal Budget released a report on ways the government could fund "Medicare-for-All" late last year, estimating that the government would need to raise $30 trillion to over 10 years to fund the program. Though there have been estimates higher than that for the eventual cost of "Medicare-for-All," the watchdog said that funding the program through only taxes on the rich would be impossible.

Sanders, for his part, has at times refused to even name a cost estimate for "Medicare-for-All."

"I don't give a number and I'll tell you why," he told The Washington Post. "It's such a huge number and it's so complicated that if I gave a number you and 50 other people would go through it and say, 'Oh..."

Recently, Sanders released a fact sheet explaining how he would pay for some of his programs, including "Medicare-for-All." That fact sheet estimates that the total cost of "Medicare-for-All" will be $47 trillion in ten years, a savings of $5 trillion compared to the amount that currently goes into the U.S. health care system.

By redirecting the currently estimated $30 trillion in local, state and federal health care spending over that timeframe to the "Medicare-for-All" program, Sanders would bring the price of new spending down to $17.5 trillion, his website says. Sanders then proposes a variety of options, including a "Medicare-for-All" premium deducted from the paychecks of people making more than $29,000 per year, increasing the top income tax rate to 52 percent and taxing capital gains as income.

However, Sanders' estimates rely on best-case scenarios that could end up ballooning the federal debt even more if they don't pan out. He has consistently acknowledged that taxes for almost all Americans would go up under "Medicare-for-All," but says that the net price Americans are paying for health care will be "significantly less" after factoring in the fact there will be no out of pocket costs.