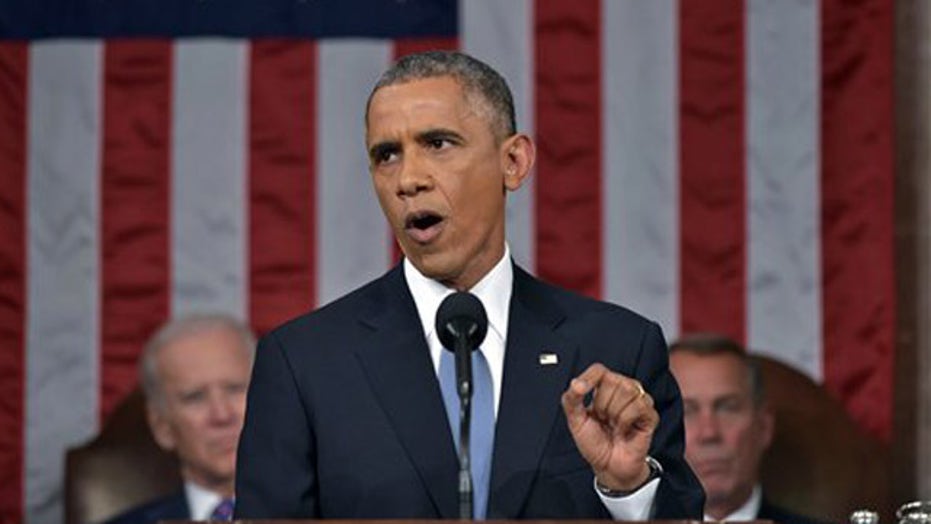 The hits and misses of Obama's State of the Union address

The Strategy Room: Gregg Jarrett, KT McFarland, Jillian Melchior and James Taranto react to the high's and low's of Obama's State of the Union address

If there were any doubts that President Obama has moved beyond trying to tackle the $18 trillion national debt, his State of the Union address should put them to rest: He’s over it.

The president on Tuesday night pitched an ambitious package of tax hikes for some, tax cuts for others, education aid and other government protections. He plans to hit the road on Wednesday to promote those policies, visiting Boise, Idaho, and after that heading to Kansas.

But absent from Obama's address was any mention of the national debt.

And, in a break from past addresses, he made no call for reforming entitlements like Social Security and Medicare, the latter being a major driver of deficits and debt. Instead, he pointed to those programs as models for how the government protects Americans from “adversity” and examples of the kind of “middle-class economics” he supports.

“That’s what middle-class economics is -- the idea that this country does best when everyone gets their fair shot, everyone does their fair share, everyone plays by the same set of rules,” Obama said.

Senior administration officials, in a briefing before the address, admitted the omission of any call for entitlement reform is an acknowledgement that the chances of a “grand bargain” on the budget is not likely during the next two years. The president also may simply not want to antagonize liberal Democrats, for a slim shot at a deal with Republicans.

But the failure to mention the issue, which still weighs heavily over the country’s long-term fiscal outlook despite shrinking deficits, did not go unnoticed by fiscal watchdogs.

Maya MacGuineas, head of the Campaign to Fix the Debt, said in a statement that while his focus on economic growth was important, “his failure to level with the American people about our serious long-term fiscal challenges was disappointing."

She acknowledged deficits have fallen – from consistently over $1 trillion every year – to their lowest levels of the Obama administration.

“But they are projected to rise again next year and exceed $1 trillion annually within a decade,” she said. “Meanwhile, debt levels are the highest they have ever been other than around World War II, and without a serious course correction they will only continue to rise over the long run.”

But Republicans complained that Obama’s plan for the next two years calls for tax hikes not to reduce the deficit further, but fund new programs.

“President Obama has increased our debt by $7.6 trillion over 6 years. Last year the federal government collected a record amount of $3 trillion dollars in revenue. Now he wants even more money to expand his dysfunctional government,” Rep. Marsha Blackburn, R-Tenn., said in a statement.

Another subject that has shown up in past State of the Union addresses, but was absent from this one, was Al Qaeda – an offshoot of which claimed responsibility for the recent Paris terror attacks.

Still, Obama said Tuesday night that the U.S. stands “united” with the victims of that attack and others. And he discussed the U.S. military campaign, with its allies, against the Islamic State in Iraq and Syria.

“We will continue to hunt down terrorists and dismantle their networks, and we reserve the right to act unilaterally, as we have done relentlessly since I took office to take out terrorists who pose a direct threat to us and our allies,” he said.