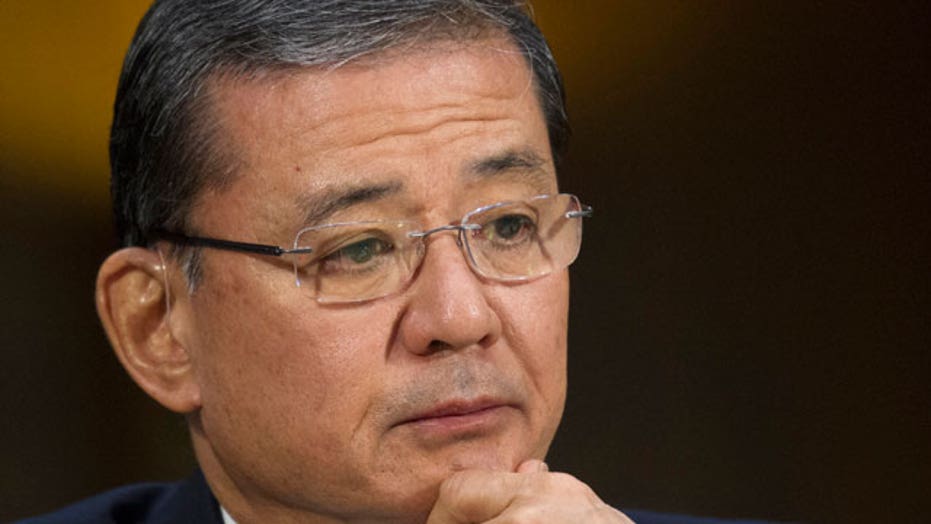 The official watchdog for the Department of Veterans Affairs claimed in a scathing report that the department has a "systemic" problem with clinics lying about patient wait times, as lawmakers on both sides of the aisle joined calls for Secretary Eric Shinseki to resign.

The VA Office of Inspector General released its interim report on Wednesday, as part of its ongoing probe into whether veterans died as a result of under-reported delays. While not reaching any conclusion on what led to those deaths, the office released troubling statistics regarding the embattled Phoenix VA facility suggesting workers under-stated wait-times in order to make their internal figures look good.

The office, in its preliminary findings, determined that veterans in Phoenix waited an average of 115 days for a primary care appointment -- far longer than the VA's official statistics showed. Such inappropriate scheduling tactics, according to the report, may be the basis for claims of "secret" waiting lists.

Sen. John McCain, R-Ariz., who until now had held off on urging Shinseki to resign, said during a press conference at his Phoenix office Wednesday afternoon that "it's time for Secretary Shinseki to step down" -- and that if he won't, "then I call on the president of the United States to relieve him of his duties, fire him."

The longtime senator and Vietnam veteran also called on the Justice Department to get involved, saying the allegations detail not just administrative issues, but "criminal problems."

So far, President Obama has stood by his VA secretary, though the White House released a statement saying the president has been briefed on the findings and found them "extremely troubling." Shinseki released a statement on Wednesday calling the latest findings "reprehensible," but did not offer his resignation.

The report released Wednesday focused on the Phoenix VA facility, while noting that reviews at a "growing number" of facilities have exposed inappropriate scheduling practices throughout the VA system. According to the office, the investigation has now expanded to 42 VA medical facilities nationwide.

"To date, our work has substantiated serious conditions at the Phoenix" center, the report said, claiming the delays have "negatively impacted the quality of care."

According to the IG's office, about 1,400 veterans awaiting a primary care appointment were appropriately included on the electronic wait-list -- but an additional 1,700 veterans waiting for an appointment were left off that list. The omission, the report warned, raises the risk that these veterans will be "forgotten or lost" in the "convoluted" Phoenix system.

Shinseki, in his statement, said he's ordered the Phoenix system to "immediately triage" each of the 1,700 veterans in order to "bring them timely care."

The IG's office also said VA national data had claimed patient wait times among a sample of Phoenix veterans typically was about 24 days. But the IG's own review found the average wait was actually 115 days.

The report would appear to substantiate allegations that clinics played around with the schedules to make it seem like patients were being seen sooner. The VA offices at Phoenix and several other locations have been accused of covering up the long waits by using improper scheduling tactics. About 40 veterans are said to have died while awaiting care in Phoenix.

Dr. Samuel Foote, a former clinic director for the VA in Phoenix who was the first to bring the allegations to light, said the findings were no surprise.

"I knew about all of this all along," Foote told The Associated Press in an interview. "The only thing I can say is you can't celebrate the fact that vets were being denied care."

Foote took issue with the finding by the inspector general that patients had, on average, waited 115 days for their first medical appointment.

"I don't think that number is correct. It was much longer," he said. "It seemed to us to be about six months."

Still, Foote said it is good that the VA finally appears to be addressing some long-standing problems.

"Everybody has been gaming the system for a long time," he said. "Phoenix just took it to another level. ... The magnitude of the problem nationwide is just so huge, so it's hard for most people to get a grasp on it."

Miller also called for Attorney General Eric Holder to launch a criminal probe into the VA's "scheduling corruption" in light of the report.

"Today the inspector general confirmed beyond a shadow of a doubt what was becoming more obvious by the day: wait time schemes and data manipulation are systemic throughout VA and are putting veterans at risk in Phoenix and across the country," he said in a statement.

Also Wednesday, Miller’s House Committee on Veterans Affairs held a hearing to address what he called the VA’s “continued lack of compliance” with a subpoena the committee issued last month. Three VA officials testified at the hearing.

The committee subpoenaed Veterans Affairs Secretary Eric Shinseki on May 8 for emails and documents tied to an alleged secret "waiting list" for sick veterans at a Phoenix VA hospital.

Miller said he does not believe the documents that have been produced as a result of the subpoena are the result of a thorough investigation for relevant records.

He said he knows the VA is withholding at least three documents from relevant communications because of attorney client privilege.

One of the VA officials, Joan Mooney, deferred questions about any documents that may have not been turned over to the committee to the VA’s general counsel.

However, Miller said he will not rest until they get a complete explanation.

“We expect VA to be forthcoming but unfortunately it takes repeated requests and threats of compulsion to get VA to bring their people here,” he said.

Following the hearing, Dr. Thomas Lynch, the VA's Deputy Under Secretary for Health, claimed that there were no secret waiting lists. Lynch said that the canceled appointments were part of an attempt to improve the clinic's efficiency.

Miller dismissed Lynch's claim by saying "There are secret lists. There are even multiple lists at some areas of speciality."