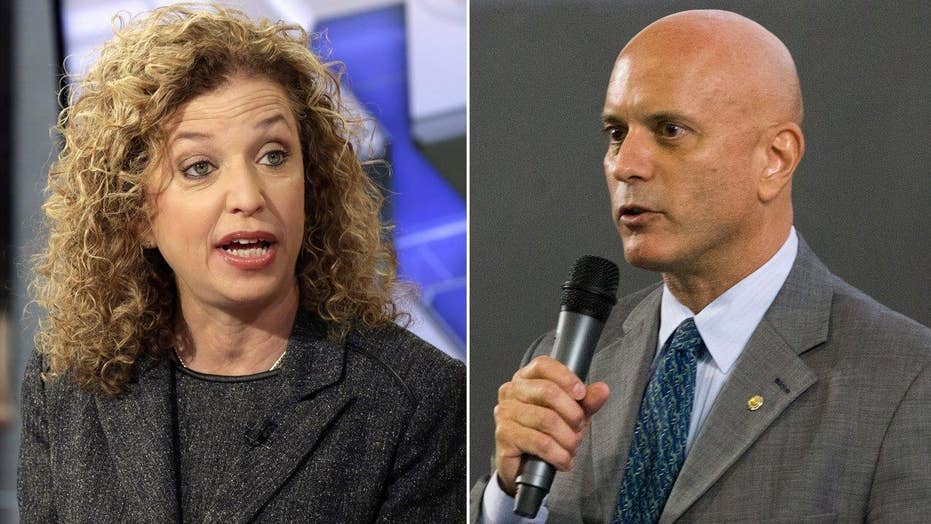 Embattled Rep. Debbie Wasserman Schultz on Sunday faced off with primary challenger Tim Canova in a debate in which the candidates slung names like “mealy-mouthed” and challenged each other’s competence on issues ranging from protecting Israel to support for retiree voters.

Wasserman Schultz, D-Fla., was expected early this year to cruise to a seventh term, until Democratic presidential candidate Bernie Sanders accused her, as leader of the Democratic National Committee, of rigging the presidential primary season for front-runner Hillary Clinton.

“Nobody is more committed to the safety of Israel,” on Sunday said Wasserman Schultz, whose 23 Congressional District, west of Fort Lauderdale, has a large Jewish population.

She also said the DNC under her leadership had the “strongest pro-Israel plank” that the group has had in years.

And she accused Canova, a law professor, of being inconsistent in his position on Israel.

"My opponent has been mealy-mouthed and waffling in his position on Israel from Day One," she said in the roughly 60-minute debate on CBS’s WFOR-TV in Miami. “He's taken three different positions in the last eight months."

Wasserman Schultz -- backed by President Obama and Clinton, now the Democratic presidential nominee -- also disagreed with Canova’s suggestion that she did not have the support of black voters in the district.

Wasserman cited in part the backing of the Congressional Black Caucus.

Canova proposed a second and third debate, which Wasserman Schultz seemed to decline, citing their primary being just two weeks away, on August 30.

Canova has tried to capitalize on the leaked DNC emails, pointing to ones that suggest Wasserman Schultz and others in the group used resources to monitor his campaign. And he vowed last week to file a federal complaint on the issue.

He has also raised $28 million for the race, in large part because of the national attention it has received.

Still, the most recent polling shows Wasserman Schultz with a strong lead in the race.

The candidates also battled Sunday over the support of the Obama administration’s Iran nuclear deal, which lifts economic sanctions in exchange for Tehran curtailing efforts to make a nuclear weapon -- a deal considered a threat to Israel.

Canova had said he supports the 2015 deal, but now says he doesn’t know how he would have voted had he been in Congress.

“I went over that deal backwards and forwards,” said Wasserman Schultz, who voted for the multi-nation agreement amid criticism about Israel’s future safety and guidelines for inspecting nuclear sites.

On other local issues, Wasserman Shultz knew the name of a mayor in the district, when asked, but Canova did not.

Canova tried to suggest that Wasserman Schultz did not support increasing Social Security benefits, in a district with a large retiree population.

"I stood in the breach over and over with my vote and my voice” to increase benefits, Wassserman Schultz replied.