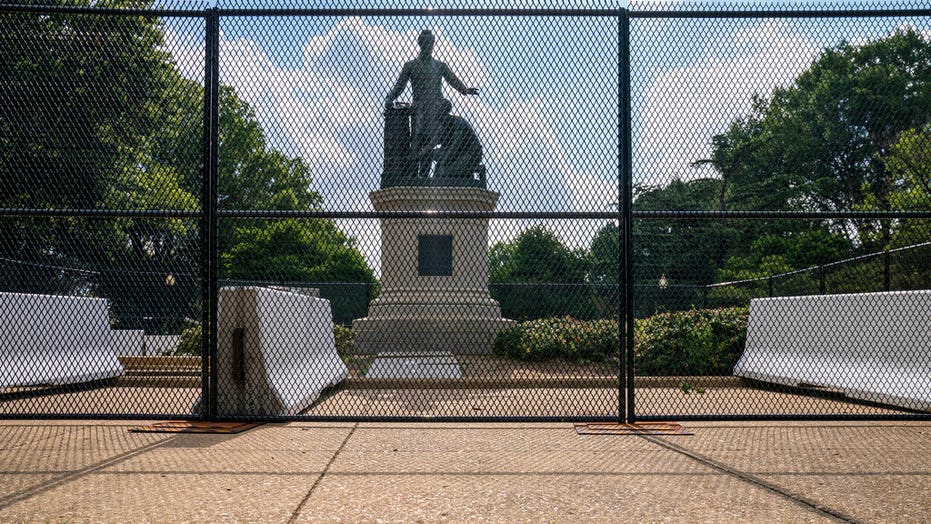 Lincoln Park saw an uneasy standoff Thursday night after left-wing protesters said they planned to rally against a statue of Abraham Lincoln in Washington, D.C., that had been paid for by freed slaves and dedicated by the African-American abolitionist Frederick Douglass.

Authorities took precautions in advance. They installed fencing and deployed police visibly, but social media videos showed that a light crowd of vocal protesters had gathered nearby.

Barriers are erected around the Emancipation Memorial in Washington, which depicts a freed slave kneeling at the feet of President Abraham Lincoln, Thursday, June 25, 2020. Calls are intensifying for the removal of the statue as the nation confronts racial injustice. (AP Photo/J. Scott Applewhite)

The Emancipation Memorial depicts Lincoln holding the Emancipation Proclamation and standing over a shackled, kneeling African-American. It represents the abolition of slavery in the United States -- but opponents have criticized the juxtaposition of a looming Lincoln above a black man on one knee.

“It’s the position of he’s getting up,” President Trump told Fox News’ Sean Hannity in a town hall special Thursday night. “He’s being freed by Abraham Lincoln. And I can see controversy, but I can also see beauty in it.”

The president said that he would prefer a legal process to examine what monuments merit removal, echoing remarks from earlier in the day from D.C. Mayor Muriel Bowser, who warned that a “mob” would not be deciding what statues get to stand in the nation’s capital.

The Emancipation Memorial in Washington's Lincoln Park depicts a freed slave kneeling at the feet of President Abraham Lincoln, Thursday, June 25, 2020. Calls are intensifying for the removal of the statue as the nation confronts racial injustice. (AP Photo/J. Scott Applewhite)

Her remarks came after a crowd tried to tear down a nearby statue of former President Andrew Jackson over the weekend and as they stepped up criticism of the Lincoln statue.

Earlier in the week, protesters announced that they planned to rally at the Emancipation Memorial on Thursday and Friday night. And on Tuesday, Washington’s congressional delegate, Eleanor Holmes Norton, said she planned to introduce legislation to remove the “problematic” statue.

“Although formerly enslaved Americans paid for this statue to be built in 1876, the design and sculpting process was done without their input and it shows,” Holmes Norton said in a statement.

She argued that the former slaves who funded the statue “were only recently liberated” and were “grateful for any recognition of their freedom.”

Following the death of George Floyd in police custody in Minneapolis on May 25, some protesters have torn down statues in cities around the country.

Their targets have ranged from Confederate monuments to Ulysses S. Grant. They have toppled Catholic saints, Christopher Columbus and George Washington.

President Trump weighed in on the issue Tuesday, tweeting that he had “authorized” authorities to crack down on vandalism and destruction on federal property.

“I have authorized the Federal Government to arrest anyone who vandalizes or destroys any monument, statue or other such Federal property in the U.S. with up to 10 years in prison, per the Veteran’s Memorial Preservation Act, or such other laws that may be pertinent,” the president wrote.

By Thursday, Fox News cameras near the base of the monument found that authorities had set up fencing around the Emancipation statue and police were out in force in the park.

“They kinda missed the boat on trying to take that statue down,” Town Hall reporter Julio Rosas told Tucker Carlson on “Tucker Carlson Tonight” Thursday. “Really the best time for them to try to do that was Tuesday because the police were off to the side. There was no fence.”