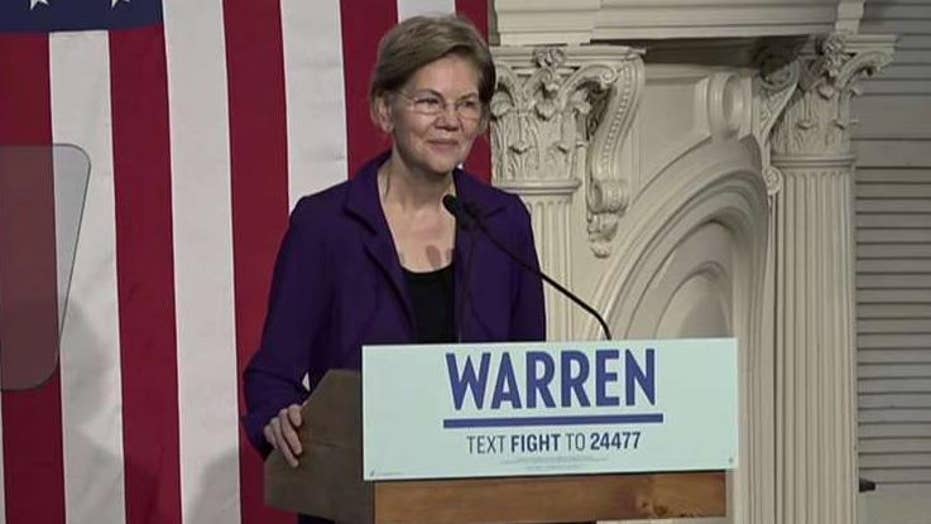 As the clock ticked toward midnight and the new year, the presidential campaign fundraising appeals were coming at a fast and furious pace.

But for Sen. Elizabeth Warren of Massachusetts – the fourth member of the top tier of Democratic nomination contenders – a decline in national and early voting state polls in November and December was expected to be accompanied by a dip in campaign donations.

"So far this quarter, we’ve raised a little over $17 million. That’s a good chunk behind where we were at this time last quarter."

As for the other top contenders, it appeared from fundraising emails that former Vice President Joe Biden, as well as Sen. Bernie Sanders and South Bend, Ind., Mayor Pete Buttigieg, will top their third-quarter hauls.

“Today is one of the most significant days of our campaign. It is the last FEC fundraising deadline of the campaign before voting starts,” Sanders wrote Tuesday in an email to supporters.

On the campaign trail, the end of 2019 also meant the end of the October-December fourth quarter of fundraising. And the Democratic candidates were blasting out last-minute pitches to raise as much cash as possible before the clock struck midnight, in a bid to post impressive hauls and demonstrate momentum in the final stretch before the leadoff Iowa caucuses.

Campaigns wanting to showcase their fundraising figures will start blasting out the final numbers as early as Wednesday, as campaigns with lackluster cash hauls typically wait until the end of January deadline to report their figures to the Federal Election Commission.

After a dismal third quarter of fundraising – when he hauled in just $15 million – Biden should see an end-of-year boost.

“We have the chance to make Q4 our biggest fundraising quarter yet. That would certainly be a big deal,” he said Sunday in a fundraising email to supporters.

Biden's best fundraising quarter to date was the April-June period, when he brought in $21.5 million in the nine weeks after he declared his candidacy in late April.

The populist independent senator from Vermont tweeted on Monday that “we are closing in on an incredible 5 million donations before our end-of-quarter deadline.”

And in Iowa on Monday night, Sanders noted that "the average contribution is about $18 apiece."

He had 3.3 million individual contributions at the end of September. Do the math, and that means roughly 1.7 million donations in the past three months. Multiply that by the contribution average, and the senator should top his third-quarter haul.

It’s the same story for Buttigieg, who is poised to come out ahead of the $19.1 million he raised last quarter. But Buttigieg’s July-September figures were far short of the $24.1 million he hauled in during the second quarter.

Tech entrepreneur Andrew Yang – a long shot for the nomination who’s risen in the polls and consistently made the debate stage – is also expected to top his $10 million third-quarter haul, which was his best to date.

“We expect to raise more than $12.5 million, at least 25 percent more than the previous quarter.”

But Yang told Fox News in New Hampshire on Tuesday that he'll top that estimate.

"We’re going to top that, he said as he laughed. "We soft-balled it a little bit."

And the candidate touted that fundraising figures show that his "campaign’s growing very, very quickly, growing faster than any other campaign in the field."

Campaign cash, along with public opinion polling, is a crucial barometer of a candidate’s popularity and a campaign’s strength. Fundraising dollars can be used to run TV, radio and digital ads, beef up grassroots voter outreach, and build up staff. And the fourth-quarter fundraising figures – the last quarterly report before Iowa kicks off the primary and caucus presidential nominating calendar on Feb. 3 – will be heavily scrutinized by political pundits.

“Fundraising numbers at this time in the primary calendar only heighten a campaign's strengths and vulnerabilities going into Iowa,” said Democratic operative Michael Ceraso, a veteran of the 2016 Sanders campaign who served as Buttigieg’s New Hampshire state director before parting ways with the campaign this past summer.

“This is important to note because a good chunk of voters who were previously tuned out are now paying attention to this race and evaluating a candidate through a viability lens. Fundraising results is a key metric that frames whether a campaign can stay competitive,” he said.