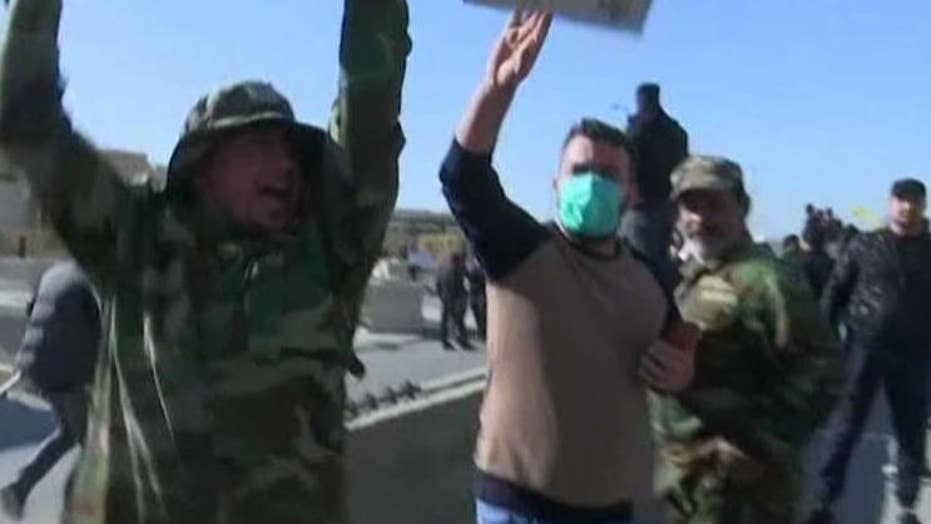 Former CIA Station Chief Dan Hoffman reacts to protesters attacking the U.S. Embassy in Baghdad in response to retaliatory airstrikes from the Pentagon.

Trump administration officials and U.S. lawmakers turned up pressure on Iraq’s government to keep American personnel in the country safe, after a stunning assault on the embassy in Baghdad renewed concerns about the influence of Iran.

Dozens of Iraqi Shiite militiamen and their supporters breached the compound Tuesday, smashing a main door and setting fire to a reception area as protests raged over U.S. airstrikes over the weekend that killed members of the Iran-backed militia. President Trump accused Iran of “orchestrating” the attack, while defending the airstrikes as in response to an attack that killed an American contractor.

A U.S. defense official told Fox News that 100 Marines were being sent to the embassy to bolster security. A U.S. Apache helicopter gunship also flew over the embassy and dropped flares in a “show of force,” attempting to disperse the crowd. Defense Secretary Mark Esper later confirmed additional forces were being sent, as the military released images of those forces deploying from Kuwait.

The storming of the compound represented a grave new challenge to the Iraq-U.S. relationship, as Iran competes for influence. Iraq has long sought to balance ties with both countries, but reports from the scene indicated Iraqi security forces did not initially stop protesters as they marched to the heavily fortified Green Zone following a funeral held for those killed in the U.S. airstrikes.

A U.S. official later told Fox News that "Iraqi security forces did participate" in protecting the embassy — and Trump made clear he expects Iraq to secure U.S. personnel.

“[W]e expect Iraq to use its forces to protect the Embassy, and so notified!” Trump said in his tweet blaming Iran. He also spoke with Iraqi Prime Minister Adil Abdul-Mahdi, stressing again the need to protect U.S. facilities in Iraq.

Secretary of State Mike Pompeo had separate phone calls with Abdul-Mahdi and Iraqi President Barham Salih on Tuesday, in which he “made clear the United States will protect and defend its people, who are there to support a sovereign and independent Iraq,” State Department spokesperson Morgan Ortagus said in a statement.

Ortagus added that both Iraqi leaders “assured the secretary that they took seriously their responsibility and would guarantee the safety and security of U.S. personnel and property.”

Yet as news of the embassy clashes spread, the Iraqi National Security Council put out a statement instead condemning the U.S. airstrikes that preceded them. 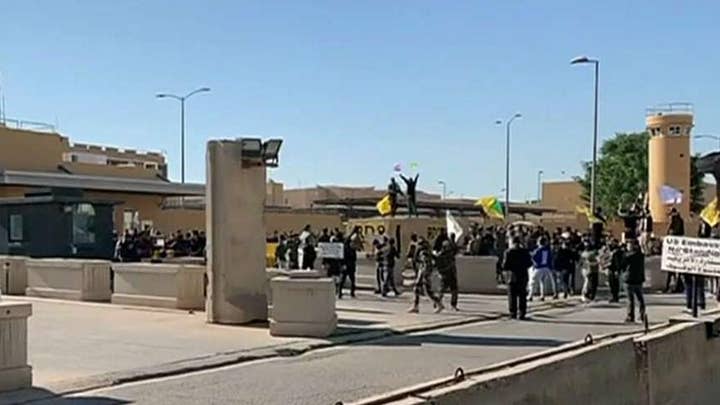 The statement went on to say that the U.S. “relied on their own conclusions and political priorities, not the priorities as assessed by the government and people of Iraq.”

Pompeo defended American actions on social media Tuesday, stating that the U.S. “responded defensively to the Iranian proxy attack that killed an American citizen,” and wounded Americans and Iraqis.

Sen. Lindsey Graham, R-S.C., backed Trump in a Twitter thread, crediting the president for "acting decisively" and saying he's put the world on notice “there will be no Benghazis on his watch.” This referred to the 2012 attack on the U.S. compound in Libya in which four Americans were killed. The Obama administration faced heavy criticism both for the embassy’s vulnerability as well as conflicting statements regarding the nature of the attack and what led to it.

In his Twitter thread, Graham laid down the gauntlet, challenging Iraq to continue working with the U.S., insisting that it would be in their best interest.

“To our Iraqi allies: This is your moment to convince the American people the US-Iraq relationship is meaningful to you and worth protecting,” Graham said. “Protect our American personnel. You will not regret it.”

Both sides of the aisle called on Iraq to cooperate. Frequent Trump critic Rep. Adam Schiff, D-Calif., called the storming of the embassy “deeply disturbing” and urged Iraq to do its part.

“The first priority is the safety of our personnel. Iraq has an obligation to protect them,” Schiff said.

The situation remains fluid in Baghdad. By early evening, protesters had set up tents outside the embassy where they said they intended to stage a sit-in. Dozens of yellow flags belonging to Iran-backed Shiite militias fluttered atop the reception area and were plastered on the embassy's concrete wall along with anti-U.S. graffiti.

A State Department official said in a statement later Tuesday that U.S. personnel are “secure” and affirmed there are no plans to evacuate the embassy, while disputing that there had been a “breach.”

The official also confirmed U.S. Ambassador Matt Tueller was not evacuated, despite “false” reports to the contrary, but was on previously scheduled “personal travel.”

“He is returning to the Embassy,” the official said. Calling on Iraq to protect facilities, the official said these “Iranian backed demonstrations in front of the U.S. Embassy should not be confused with the Iraqi protestors who have been in the streets since October to decry the corruption exported to Iraq by the Iranian regime.”

Esper said in a statement that the Pentagon and the State Department are working closely to ensure the safety of those at the embassy, confirming they are sending "additional forces" to support personnel at the scene.

He added: "As in all countries, we rely on host nation forces to assist in the protection of our personnel in country, and we call on the Government of Iraq to fulfill its international responsibilities to do so.  The United States continues to support the Iraqi people and a free, sovereign, and prosperous Iraq."