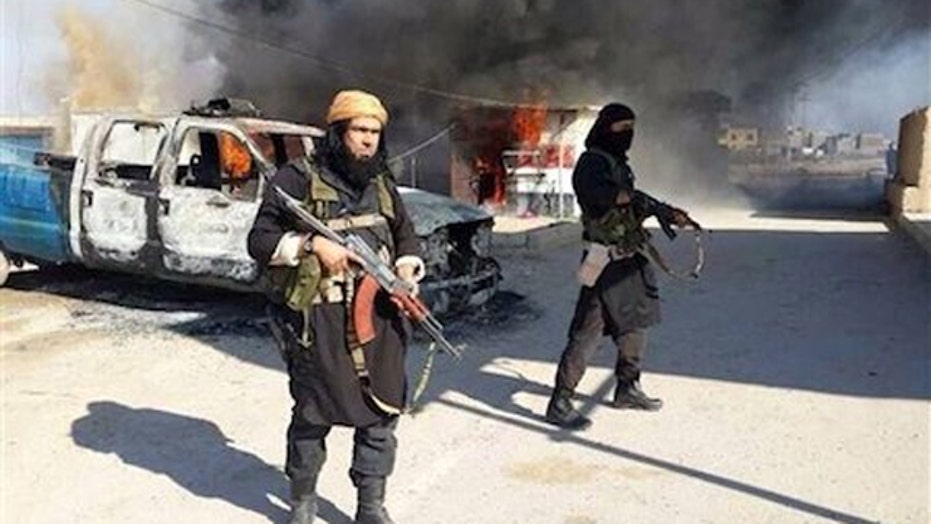 NATO allies agree to join US

The U.S. has launched fresh airstrikes against the Islamic State militant group in an effort to keep the Haditha Dam in western Iraq in the hands of that country's army.

U.S. Central Command confirmed the airstrikes in a statement issued early Sunday, saying that five Humvees, an armed vehicle, and a checkpoint were destroyed. The strikes also damaged a militant bunker. The U.S. carried out one additional airstrike that destroyed a humvee at the crucial Mosul Dam in northern Iraq.

Sunday's strikes bring the total number conducted by CentCom to 138 since operations began August 8. The latest strikes represented a broadening of the U.S. campaign against the Islamic State, also known as ISIS, moving the military operations closer to the border of Syria, where the group also has been operating.

"We conducted these strikes to prevent terrorists from further threatening the security of the dam, which remains under control of Iraqi Security Forces, with support from Sunni tribes," said Pentagon Press Secretary Rear Adm. John Kirby, who was traveling with Defense Secretary Chuck Hagel in the former Soviet republic of Georgia Sunday.

"Yesterday, at the direction of the President and in coordination with the Government of Iraq, the U.S. military conducted airstrikes against Islamic State of Iraq and the Levant (ISIL) positions in Iraq, in support of Iraqi Security Forces' efforts to retain control of and defend the critical infrastructure of the Haditha Dam in Anbar province," NSC spokesperson Caitlin Hayden said in a statement Sunday.

Hagel called the Hadith Dam "a critically important facility" to Iraqis, adding that the U.S. is continuing to explore all options for expanding the battle against the Islamic State into Syria.

Last month Islamic State fighters were battling to capture the Haditha Dam, which has six power generators located alongside Iraq's second-largest reservoir. But, despite their attacks, Iraqi forces there backed up by local Sunni tribes have been able to hold them off.

The group was able to take control of the Mosul Dam in northern Iraq last month, but persistent U.S. airstrikes dislodged the militants. And while fighters have been trying to take it back, the U.S. has continued to use strikes to keep them at bay.

"We will continue to conduct operations as needed in support of the Iraqi Security Forces and the Sunni tribes, working with those forces securing Haditha Dam," Kirby said.

U.S. officials have expressed concerns that militants could flood Baghdad and other large swaths of the country if they control the dams.  It also would give the group control over electricity, which they could use to strengthen their control over residents.

Earlier this year, the group gained control of the Fallujah Dam on the Euphrates River and the militants used it as a weapon, opening it to flood downriver when government forces moved in on the city.

Water is a precious commodity in Iraq, a largely desert country of 32.5 million people. The decline of water levels in the Euphrates over recent years has led to electricity shortages in towns south of Baghdad, where steam-powered generators depend entirely on water levels

On Friday and Saturday, the U.S. used a mix of attack aircraft, fighter jets and drones to conduct two airstrikes around Irbil. The strikes hit trucks and armored vehicles.

The airstrikes are aimed at protecting U.S. personnel and facilities, as well protecting critical infrastructure and aiding refugees fleeing the militants.