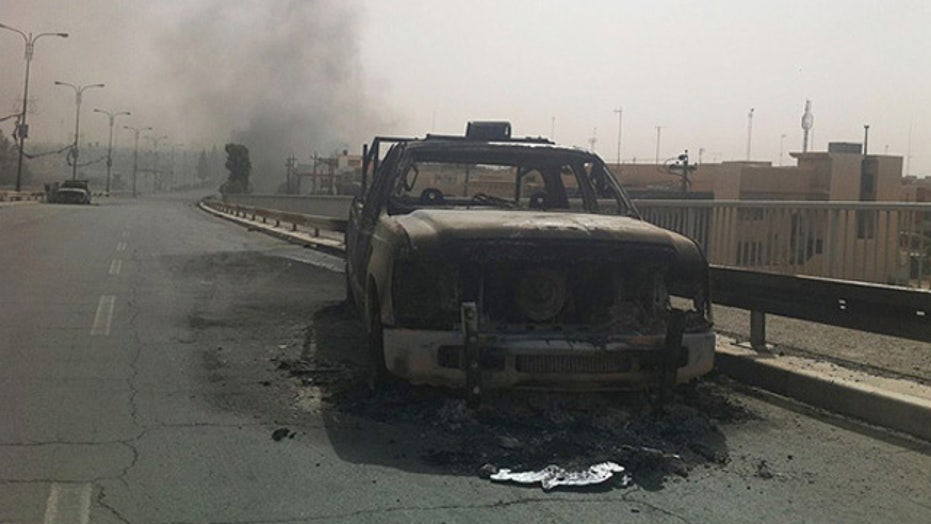 The United States is flying F-18 surveillance missions over Iraq from an aircraft carrier in the Persian Gulf, officials confirm to Fox News, as President Obama weighs options for "increased security assistance" in the country.

The surveillance missions are being launched from the USS George HW Bush. It was already known that the Obama administration had authorized "manned and unmanned" surveillance flights, but F-18's are not traditional surveillance aircraft -- they are attack aircraft.

"It's not so much about looking as it is being seen," a U.S. official told Fox News.

Obama is thought to be leaning away from pursuing airstrikes in Iraq, as the Iraqi government and Shiite militias battle Sunni militants from the Islamic State of Iraq and Syria. But, after the president met Wednesday afternoon with top congressional leaders in the Oval Office, the White House confirmed Obama still is weighing various military options.

The White House said Obama reviewed with lawmakers "our efforts to strengthen the capacity of Iraq's security forces to confront the threat from [ISIS], including options for increased security assistance."

ISIS, an offshoot of Al Qaeda, has seized Mosul, Tikrit and other Iraqi towns as members of the Iraqi military abandon their posts. The Iraqi government reportedly has appealed for the Obama administration to launch airstrikes.

While officials say no decisions have been made, one senior official told Fox News that the president appears to be leaning toward sending roughly 100 special forces into the region. Such a contingent presumably would be sent to help train the Iraqi military and boost intelligence available to the Iraqis.

Obama met for about an hour Wednesday afternoon with the top four congressional leaders, none of whom revealed many details about what was said.

An aide to Senate Republican Leader Mitch McConnell reiterated that ISIS poses a "grave threat to U.S. interests" and appealed to the president -- as did House Speaker John Boehner -- to come up with a plan.

"Unfortunately, Iraqi security forces are now less capable than when the president withdrew the entirety of our force without successfully negotiating a remaining U.S. presence capable of preserving our gains and mentoring our partners," the aide said. "It is critical that we protect Americans, our allies and our interests."

The president likely used his meeting to take congressional leaders' pulse on the Iraq options, recognizing that his Democratic colleagues may be a tougher sell. House Democratic Leader Nancy Pelosi has voiced concern about any U.S. involvement in the sectarian crisis in Iraq. She and Senate Democratic Leader Harry Reid attended, along with McConnell and Boehner.

More broadly, the Obama administration is pressing for Iraqi Prime Minister Nouri al-Maliki to take steps to make his Shiite-dominated government more inclusive. Obama said last week that any short-term U.S. military actions in Iraq would not be successful unless they were accompanied by political changes by the government in Baghdad.

The efforts of U.S. intelligence have been hindered by the withdrawal of American forces from Iraq in 2011 and the ongoing Syrian civil war, which has left large parts of both countries off-limits to operatives.

The Associated Press reported Wednesday that U.S. intelligence analysts are working to track the movements of key figures in the Islamic State of Iraq and Syria. They are sifting through data provided by Jordanian, Saudi, Turkish and other intelligence services, as well as their own human sources, satellites, drones and communications intercepts by the National Security Agency, U.S. intelligence officials say.

The CIA and other agencies are assembling detailed dossiers known as "targeting packages" that amount to profiles of insurgent commanders, including as much day-to-day information as can be gathered about their location, movements, associates and communications. Those packages can be used to target the subjects for drone strikes or other military action, though they also can be used for nonlethal purposes, current and former officials say.