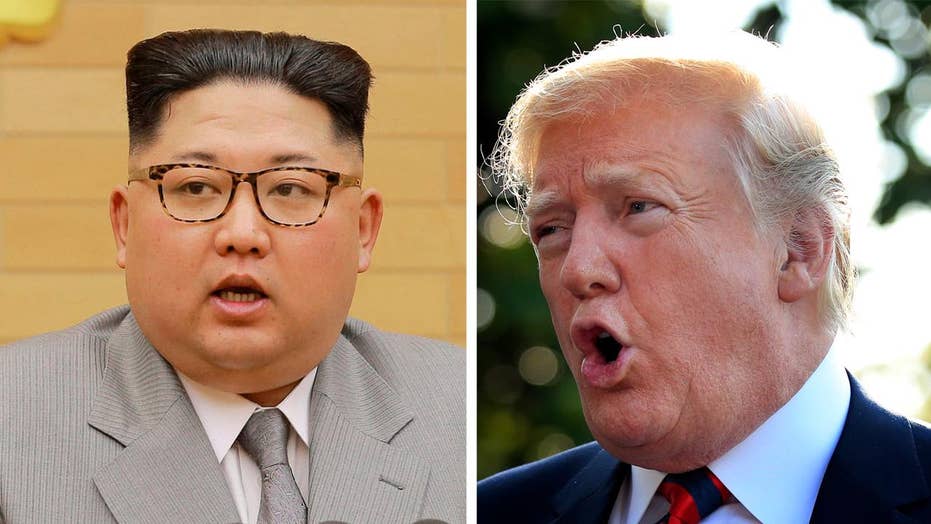 Embarking on a self-described "mission of peace," President Donald Trump's seat-of-the-pants foreign policy is facing its toughest test yet as he attempts this week to personally broker an end to North Korea's nuclear program with Kim Jong Un.

The impulsive American president, who just days earlier called into doubt a pillar of the Western alliance, is set to face his match on the global stage as he prepares to meet Kim in Singapore. In the historic first meeting between the leaders of the technically-still-warring nations, Trump is prioritizing instinct over planning. Unlike traditional summits between heads of state, where most of the work is completed in advance of a photo-op, U.S. officials say the only thing certain ahead of these talks will be their unpredictability.

Ever since Trump shocked allies, White House officials, and, by some accounts, the North Koreans themselves when he accepted Kim's March invitation for a meeting, the two leaders have lurched toward an uncertain encounter that may well determine the fate of millions.

"It's unknown territory in the truest sense, but I really feel confident," Trump told reporters Saturday. "I feel that Kim Jong Un wants to do something great for his people and he has that opportunity and he won't have that opportunity again."

Trump's engagement with Kim fulfills the North Korean ruling family's long-unrequited yearning for international legitimacy, itself a substantial concession that could weaken more than a generation of U.S. efforts to isolate the country on the global stage.

A triumvirate of forces is bringing the meeting to fruition, said Scott Snyder, Senior Fellow for Korea Studies and Director of the Program on U.S.-Korea Policy at the Council on Foreign Relations, describing the summit as "Produced by Kim, directed by (South Korean President Moon Jae-in), and inspired by Trump."

A police officer guards the entrance of the international media center in Singapore ahead of the June 12 summit between U.S. President Donald Trump and North Korean leader Kim Jong Un, June 10, 2018. (Associated Press)

The hard-hitting sanctions and desire for legitimacy brought the youthful Kim to the table. The South Korean leader's efforts to avert a potentially catastrophic U.S. first strike pushed both leaders to take a risk. And Trump is the first U.S. president willing to sit-down with the autocratic ruler with so few concessions, believing his self-professed negotiating prowess will guide him though uncharted diplomatic waters.

Raising expectations in advance of the meeting, Trump said the outcome will rely heavily on his own instincts. The U.S. president, who prides himself on his deal-making prowess, said he will know "within the first minute" of meeting Kim whether the North Korean leader is serious about the nuclear negotiations.

"I think I'll know pretty quickly whether or not, in my opinion, something positive will happen. And if I think it won't happen, I'm not going to waste my time. I don't want to waste his time," Trump said.

"I think I'll know pretty quickly whether or not, in my opinion, something positive will happen. And if I think it won't happen, I'm not going to waste my time. I don't want to waste his time."

"This is a leader who really is an unknown personality," Trump added of Kim. "People don't know much about him. I think that he's going to surprise on the upside, very much on the upside."

White House aides described Trump in the days after receiving the initial Kim invitation as being obsessed by visions of winning the Nobel Peace Prize and using 'The Art of the Deal' to put his mark on the global order. In recent weeks Trump's enthusiasm has been tempered somewhat by the challenge of deal-making with such an unpredictable opponent. And there are worries from the White House to East Asian allies that Trump's desire for an agreement will lead him to accept any deal — even if it's a bad one.

Trump is set to dangle before Kim visions of protection, economic investment, and even a White House visit, in return for a commitment to abandon his nuclear weapons program. Kim, U.S. officials say, has agreed to put his stockpile of a half-hundred or more weapons on the table for negotiation, but the two countries have offered differing visions of what that would entail. Despite Kim's apparent eagerness for a summit with Trump, there are doubts that he would fully relinquish his nuclear arsenal, which he may see as his guarantor of his survival.

U.S. defense and intelligence officials have assessed the North to be on the threshold of having the capability to strike anywhere in the continental U.S. with a nuclear-tipped missile — a capacity that Trump and other U.S. officials have said they would not tolerate.

Trump reiterated his promise Saturday that the U.S. "will watch over and we'll protect" Kim and his government in return for him giving up the nuclear program.

Traveling to Singapore, Trump is looking to temporarily escape his flaring personal conflicts with key U.S. allies over trade as well as domestic pressure like the swirling Russia probe. Acutely aware of his coverage in the media, Trump has enjoyed how North Korea has overshadowed some of the more negative coverage of his tumultuous White House.

Still, Trump's team has not always been on the same page, with Secretary of State Mike Pompeo — who has been leading the administration's efforts — more supportive, while the hawkish National Security Adviser John Bolton has been more skeptical. Bolton has been far less visible in the planning process, after a comment he made about favoring the "Libya model" for denuclearization enraged the North Koreans.

Libya gave up its program at an early stage only to see its longtime dictator overthrown and brutally killed years less than a decade later.

The summit timing, days after Trump left a trail of diplomatic wreckage as he exited the annual Group of Seven nations Saturday, cast further light on the extent to which he increasingly keeps his own counsel, eschewing the cautionary advice of aides and confident in his ability to single-handedly attempt to redraw the global order.

In Canada, the U.S. president threatened longtime allies over trade practices at a defiant exit press conference before dramatically tweeting that host Prime Minister Justin Trudeau was "weak" and withdrawing his endorsement of the group's traditional joint communique.

"His message from Quebec to Singapore is that he is going to meld the industrial democracies to his will — and bring back Russia," said Steve Bannon, Trump's former campaign and White House adviser.