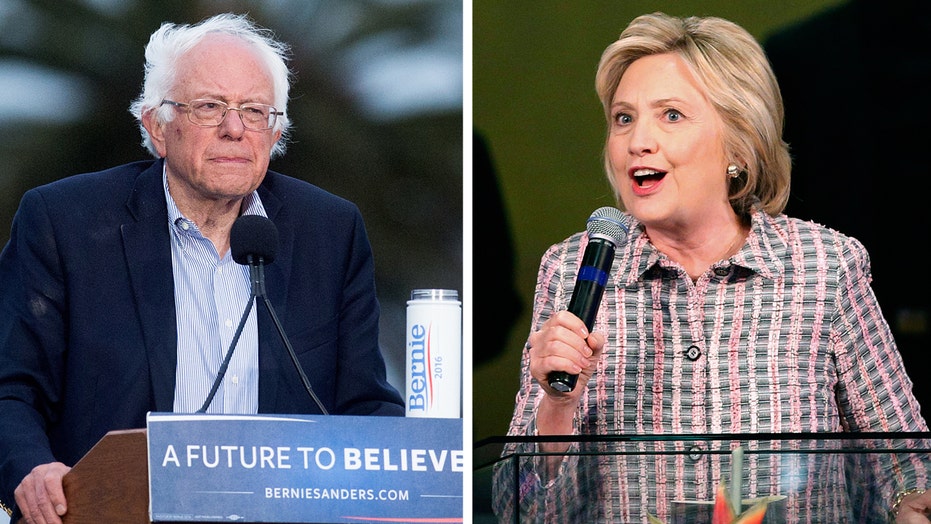 Is it time for Sanders to give up his supporters to Clinton?

What voters can expect from the final primary races

Bernie Sanders is blasting out mixed messages about his presidential campaign plans once the dust settles from Tuesday’s last major batch of primaries – on one hand vowing to fight to the convention, and on the other saying he’ll “assess” his options Wednesday, as he returns home to Burlington.

The speculation is swirling as Sanders faces mounting pressure from senior Democrats to step aside and let presumptive nominee Hillary Clinton charge ahead in the general election battle against Donald Trump.

Fox News projected Tuesday night that Clinton has earned enough delegates to clinch the party's nomination. With that in hand, President Obama reportedly is expected to get behind Clinton in a matter of days.

But Sanders’ plans are the big X-factor.

Senate Democratic Whip Dick Durbin, of Illinois, said Tuesday, when asked whether Sanders may quit the race, “All bets are off until the convention.”

Sanders’ campaign lashed out at the media overnight after the Associated Press earlier declared that Clinton had reached the necessary 2,383 delegates to clinch the nomination, before Tuesday's primary voting even began.

“There is nothing to concede,” he told KTVU. “Secretary Clinton will not have the requisite number of pledged delegates to win the Democratic nomination. She will be dependent on superdelegates.”

Superdelegates are the party insiders and officials free to support whichever candidate they want. Their support helped bring Clinton to the 2,383 delegate threshold, and Sanders has argued all along that he intends to court them in hopes of luring them to his side before the convention.

At a press conference late Monday, Sanders indicated he’ll consider his options once Tuesday’s primaries are over. In a potentially telling sign, he’s returning to Burlington after the votes.

Republicans are casting votes in all those contests save for North Dakota.

Trump will speak to the media at 9 p.m. ET Tuesday night.

Trump has already locked up the nomination, however, and for weeks has effectively been running a general election campaign.

On Tuesday, the frustration among Sanders supporters was evident on social media, as his backers accused AP and television networks of stifling voter turnout and relying upon superdelegates who won't formally cast their vote until the party's Philadelphia convention in July.

Sanders spokesman Michael Briggs said the campaign's job is to convince the superdelegates that the Vermont senator is "by far the strongest candidate against Donald Trump." He said calling the Democratic contest before superdelegates formally vote at the convention was a "rush to judgment."

In the AP's survey, which began in late 2015, no superdelegate has flipped support from Clinton to Sanders. None has suggested that could happen.