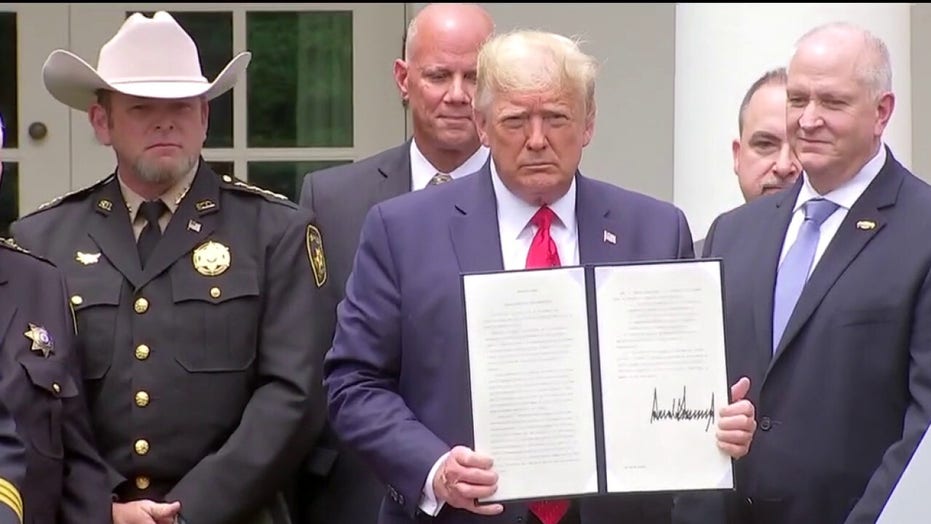 President Trump signed an executive order on law enforcement reform Tuesday following weeks of police brutality and racial injustice protests that have rippled across the nation and globe after the death of George Floyd.

Here's what's in the executive order:

It calls for prohibiting the use of the chokehold technique except when law enforcement officers' lives are in danger.

The order says the attorney general will create a database to share information between law enforcement agencies and track officers who have repeated complaints against them. The database will track “excessive use of force,” while still accounting for privacy and due process rights.

The DOJ will withhold discretionary grant funding from agencies that do not submit information to the database.

It says the Department of Justice will only provide discretionary grant funding to state and local law enforcement agencies that seek credentials from a “reputable independent credentialing body” certified by the DOJ.

The credential body will address topics in their review such as use of force and de-escalation training that holds them to high standards, as well as early warning systems which help to identify officers who may require intervention. The body will also set best practice standards for community engagement.

The order states that since the mid-20th century, the U.S. has “witnessed a reduction in targeted mental health treatment,” thus leaving the responsibility to respond to those with mental health and substance abuse issues on police officers.

The order, under the Attorney General and the Secretary of Health and Human Services, will work to train officers in dealing with those struggling with mental health, homelessness and addiction. They will also work to increase the capacity of social workers and mental health experts working directly with law enforcement, to develop “co-responder” programs.

The Secretary of Health and Human Services is to survey “community support models” aimed at addressing mental health, homelessness and addiction and within 90 days summarize results and issue recommendations for how funds can be reallocated to widely implement successful support models.

The order also promises to increase programs aimed at improving relationships between law enforcement and the communities they serve, and community outreach and listening sessions. It will also increase mental health services for officers themselves and seek to retain and recruit officers who are high-performing or likely to be high-performing.